Anyone seen this hallmark?

This is at a local pawn shop. I ask if I could snap a pic of the hallmark and they agreed so here is what I got with one quick snap. I thought it was a better picture until I got home and got it blown up.

The first signature looks like the Copyright symbol and the M.M. Rogers I’ve seen on silverware? Which doesn’t make sense to me. But the second one, I don’t have a clue, it is a unique script so I was hoping maybe someone had seen it before. 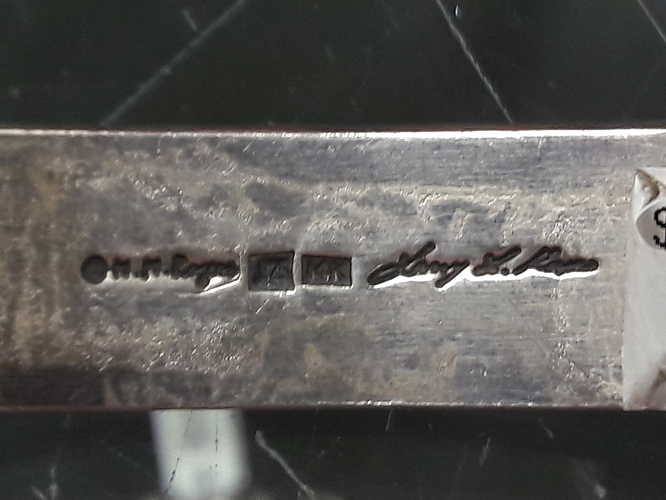 Did they perhaps start with sterling flatware? I don’t remember M M Rogers though. There are lots of different ones to include W. M Rogers, Rogers. Bros etc. What is the piece? What does the front look like?

This is at the same pawn that had the Esther Wood kachina necklace that I showed some time back. I wasn’t able to photograph the front. It is a cuff bracelet that is a silver band with a gold band on top containing storyteller figures. The gold band is slightly narrower so the gold looks to be trimmed in silver.

I would have to say I was confusing the MM for W.M. so it’s not the silverware people. I was just hoping someone was familiar with the shape of the signatures because I can’t make out exactly what they are.

This may give you an idea what new asking price is… Alpine Bracelet 17045 - Fine Handmade jewelry by M. M. Rogers Design

and this what is selling used today…

Get the best deals for MM Rogers Sterling at eBay.com. We have a great online selection at the lowest prices with Fast & Free shipping on many items!

I would think It’s possible certain makers employed by MM Rogers & Company are collectible themselves -and seems I’ve seen this signature but do not know this artist.

Thank you Sara, great info, seems to be much like Barse.

BTW, if you can get that bracelet for anything close to the price you want to pay, you’re literally getting it at an absolute steal.

The asking price the bracelet would be discounted from would correspond roughly to pre-2005 pricing when gold was literally around $300 or so an ounce, and silver sold for around $5 an ounce. Gold is now close to $1,700 an ounce, and silver sells for over $20 an ounce at Jewelry suppliers like Rio Grande and Thunderbird.

If the Jewelry is genuine M. M. Rogers, and it looks like this one is (I’d have to see the whole bracelet to assess) retail value would be multiples of the current asking price.

M. M. Rogers is a hallmark of Southwest, Western, and Fine Jewelry Designer Michael Rogers, and is associated with the M. M. Rogers Studio.

No connection to W.M. Rogers