Can anyone help with telling me anything about this bracelet

I purchased this recently, but don’t know much about it, it’s stamped Sterling on the inside, and I was told it is old Turquoise. 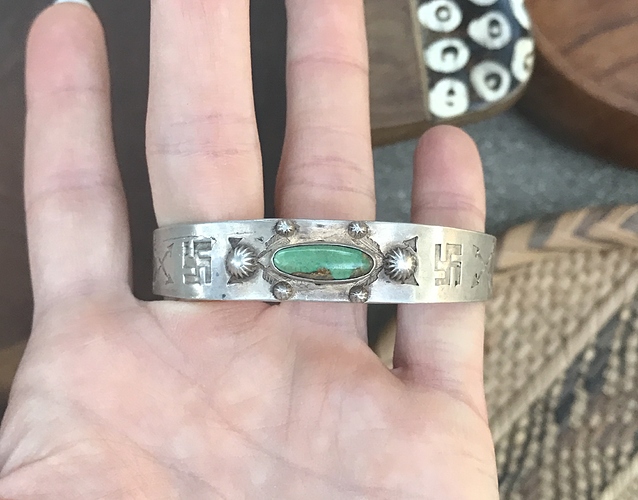 Hey there! This is a great piece you have. This style of bracelet is called “Fred Harvey” era jewelry.The center gem is a piece of old turquoise. The designs that look like swasticas are called “whirling logs” or “rolling logs.” Native Americans (and many other cultures as well) used it as a symbol of good luck or good fortune. Around 1945 when WWll was well on its way, native Americans and most other cultures discontinued its use due to its association with the Nazi political party.

This looks like an older Fred Harvey piece, and it appears to be earlier than 1930, a photograph of the back side and the hallmark will help determine this.

Thank you for the info Bree, do you have any idea what is worth?

If it didn’t have the whirling logs, I would have it priced between $165-$185 in my store. But because it has the logs, $285-$325. Try searching eBay for rolling log or whirling log Fred Harvey jewelry. You will definitely get sticker shock! People ask high prices for whirling log jewelry.