Evaluating age or other characteristics?

My squash and I are back. For those who didn’t see my original post it arrived wet after the auction company I bought it from apparently soaked it in silver cleaner. It’s back from the jeweler, who tightened two stones that had loosened as a result of the fluid. The turquoise hasn’t changed color and the necklace appears to be ok. My question is, with a squash, how do you know how old it is? The cleaner destroyed the pretty patina it had. There are no hallmarks on the necklace. It tests for sterling and I did the “lip test” on the turquoise - it definitely stuck! Are there any clues that would give me any more information about the necklace? It was sold to me as an estate sterling piece that appeared to have been worn very little. It’s heavy, about 175 grams. Of course it was sold as Old Pawn but I’m coming to realize people either don’t know what that means or are just flat lying to get a purchase. The jeweler did say the edges of the bezels are not soldered - I didn’t know if this had anything to do with the age of the necklace. The turquoise is a bit darker than in my photos. The light is washing it out. 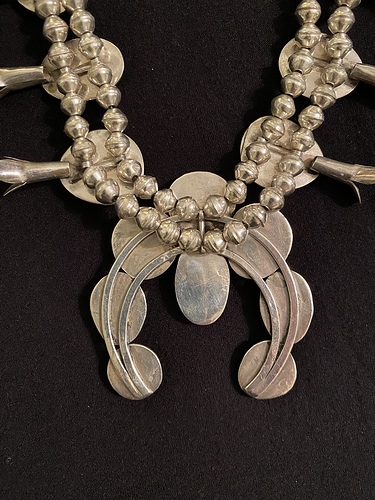 Estimating age relies on being able to understand design history in Navajo jewelry, techniques, and materials. Here’s where experience and a great library really come into value.
This type of squash blossom necklace is absolutely and clearly mid-twentieth-century; gobs of squash necklaces were made and sold during the “boom” of the 1960s-1970s.

For your piece, the biggest “tell” of its era is the type of turquoise: seafoam. That knobby, bubbly look was an innovation in jewelry at midcentury: it became popular but also had plenty of detractors at first. Therefore, it’s helpful to know when a given type of turq enters or leaves the marketplace. There’s a lot that goes into dating!

Oh, about old pawn, yes it’s a widely abused term that’s salted into listings to increase appeal, I guess. There really was and still is such a thing as the phenomenon of pawning one’s jewelry and not redeeming it, after which it can be sold. But the online world uses it too freely just to mean secondary market and vintage-ish.

I’m late responding, just looking through some old discussions. As @chicfarmer said “dead pawn,” or just “pawn” is a term that is used to indicate a piece is older, authentic, and native owned…many times incorrectly! I have a few pieces with their pawn tags which adds to the authenticity. I recently bought this heavy bracelet for my husband. It has a Pawn ticket from Tobe Turpen’s describing it as a 9-stone Sleeping Beauty bracelet. On a tag with the bracelet it states “by Fred Thompson,” but there is no hallmark.
Interestingly, I’ve read that Fred Thompson worked for Tobe. I ever met Tobe, but have been told by friends he was a very nice man.
Processing: C57CC7B6-FF40-4276-B566-BE5C254AA872.jpeg…

Your pics didn’t come through. Would you try again? I’d love to see them.

I have quite a few pieces of jewelry with the pawn tickets. Two are also from Tobe Turpen’s. Do you know Perry Null used to be Tobe Turpen’s? I posted one of my rings with the ticket on here (had a question about the stone), and Jason said it had been a long time since he’d seen one of those.

The first pawn piece I ever bought had dead pawn written on the ticket (all the others I kept just say pawn). At that time I had no idea what it meant, and bothered me because I thought it meant the owner had died. I almost stopped wearing the cuff, and then I learned the meaning.

Unfortunately I threw that ticket away before I knew better. I thought I had read that now stores generally no longer give you the ticket with the piece. I’ve bought pawn jewelry more recently, and the store took off the ticket.

Check for weird marks. Fred Thompson used a pictograph that looks like a snake.

Too bad the patina was destroyed. I would ask for a partial refund because of it.
Unless the seller stated that the piece would be cleaned prior to shipment.
Also for compensation due to the chemical used to remove the patina also made some of the stones lose.

It is a very pretty necklace.

@Islandmomma Thanks, yes I did…I have another piece by Fred Thompson and am familiar with hid hallmark. Ill try attaching pictures again…We live in a black hole in the country and sometimes have sketchy WiFi and data. Here’s hoping they come through! 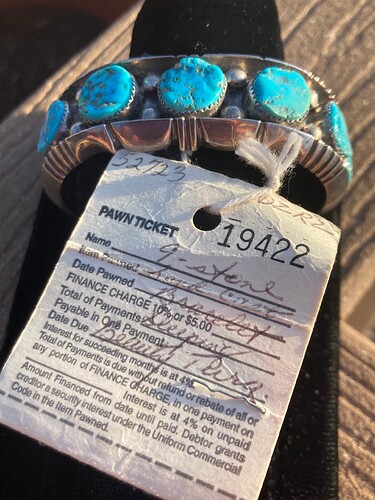 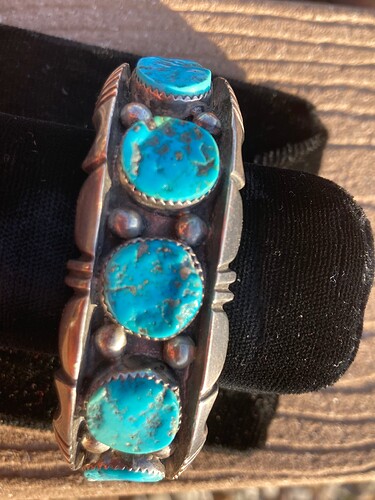 @Ziacat Funny story! I did not know that Perry Null took over Tobe Turpen’s trading post, but I’ve shopped at Perry Null couple times, and believe I’ve met Jason. My friend who knew Tobe and purchased a lot of pawn, said he was a great guy. My friend recently passed away and I’ve been fortunate to be able to purchase some from his collection for good prices. Anyway, over the years I too have lost/misplaced couple Pawn tickets, but now have a system of keeping them (at least I try too!).
I was able to send the pictures again this am…sometimes our WiFi out in the country gives me fits, but it went through fine. I Attached the photos to my response to Islandmomma’s post.

I didn’t know it either till I learned it on this site. I’ve only been able to stop and shop in Gallup once (although been through there numerous times), but it was quite a while ago and I don’t know if Tobe Turpen’s was Perry Null yet or not. The pieces I bought from from Tobe Turpen’s were at the Eiteljorg Indian Art Market. Years ago they used to have a couple shops from Gallup bring in boxes of pawn jewelry. I don’t know who brought the pawn, if it was the owner or not, but whoever came to the market from Tobe Turpen’s was very friendly, and very kind in sharing their knowledge.

Thanks for reattaching those. What a beautiful cuff; I love that style. I always wanted a cuff similar to that. Most of the cuffs I own only have one to three stones. Finally this summer I found a sandcast piece with five stones in a row at Cowboys and Indians Antiques in ABQ that fit me and was in my price range.