I have a ‘thing’ for necklaces. The first two were recently purchased for $150 each. The person which I bought them from said they were originally bought early 80’s in New Hampshire and were made by a ‘lakoda’ indian. However, they are hallmarked with two different signatures. One appears Allen Chee (possibly) and E. SPENCER The third, is one which I purchased elsewhere for about twice as much and I have no information pertaining to it. It is not marked.
I would like to know everybody’s thoughts; If the turquoise looks specific to a particular mine, if the artist is one familiar to anybody, if you think they were worth what I paid, possibly a time period of the last one pictured, or any other thoughts or information anyone may have to share! !
Oh! Also… I’m debating as to whether I should clean them. I’ve always been a fan of natural patina but finding the desire to clean them up. Thoughts on that as well and maybe some advice on the best way to do so!!!
Thanks in advance, gang!
20190921_175346|666x500 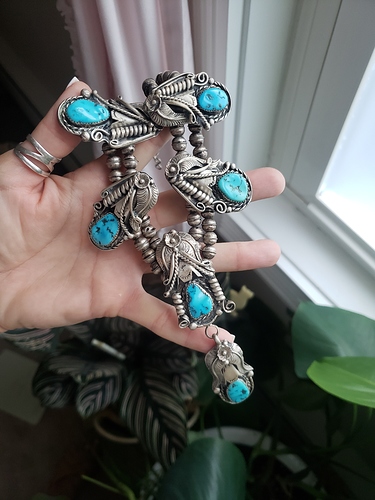 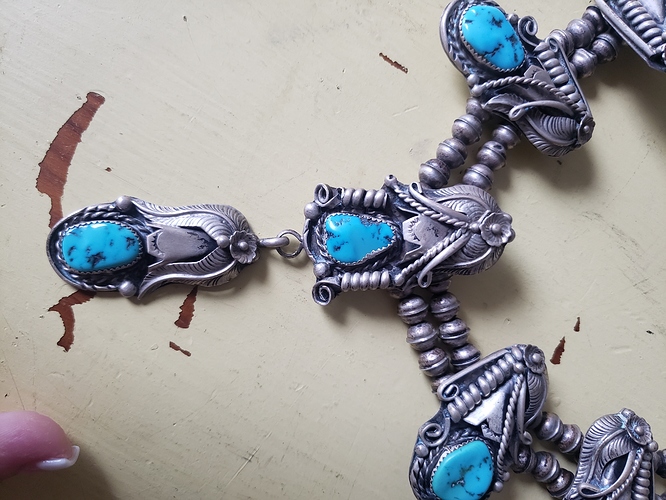 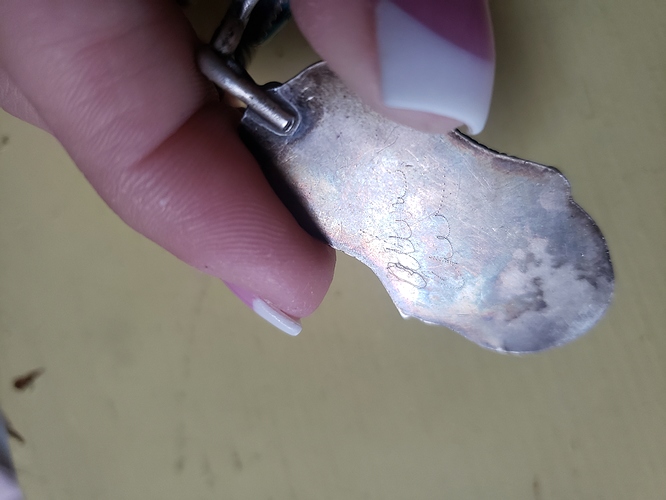 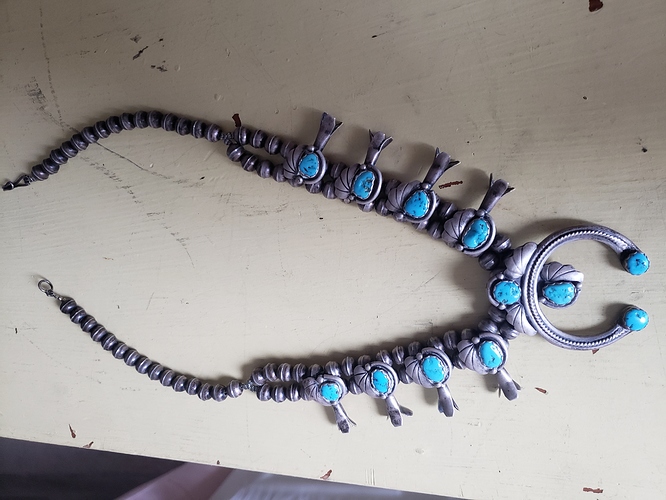 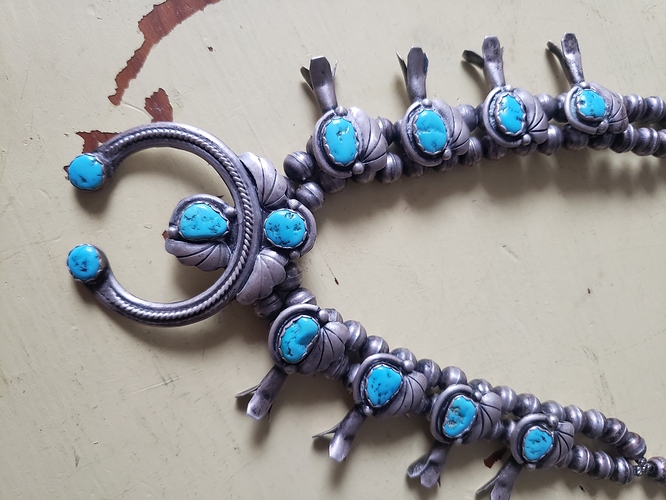 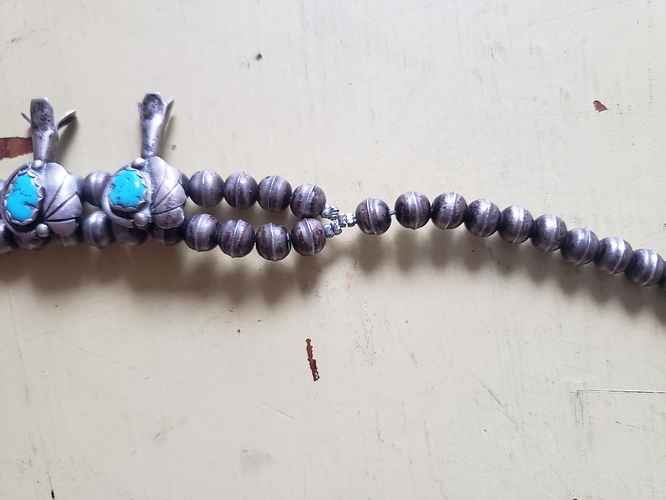 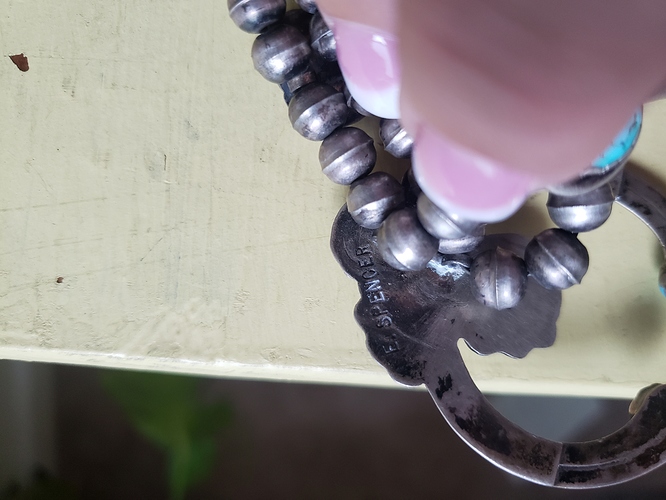 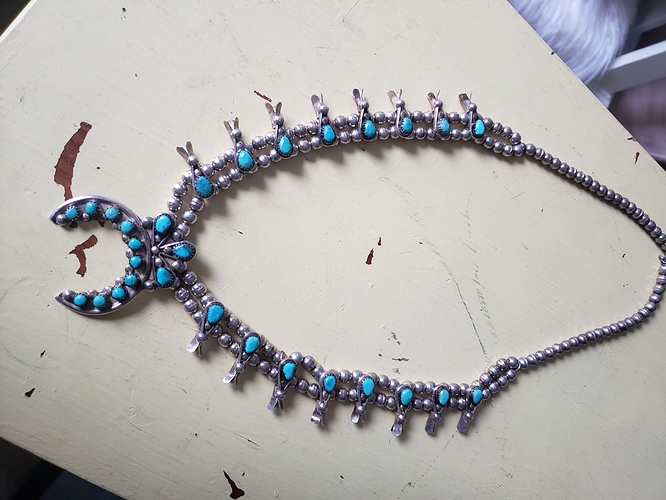 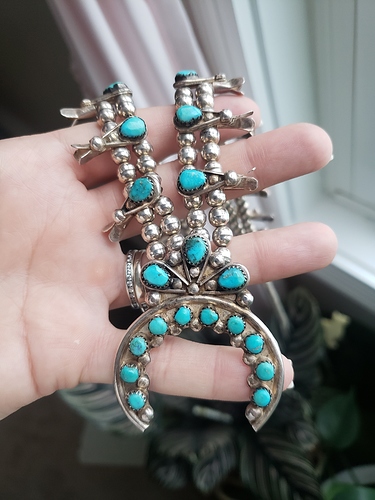 Allen Chee and E. Spencer are both names I’ve heard plenty of times. The Chee necklace looks like it might be Sleeping Beauty turquoise: possibly the same for the Spencer. Think you got a good deal at $150. Ea. The third one looks pretty nice also. Don’t think you overpaid. Wear them in good health! Bet they look great on you.

WOW! What beautiful pieces, I wish I could find things this gorgeous at such good prices!

Interesting use of crimp beads on the second necklace (first squash blossom). I imagine it was re-strung at some point by someone who probably doesn’t normally work with NA jewelry and didn’t do it in the traditional way. Regardless, it is a nice necklace and you got a deal on it at $150. If the crimp beads bother you you could always have it re-strung; if not wear it and enjoy! Hougart’s has a listing for E. Spencer but it is not terribly helpful: doesn’t give a full name but says they are Navajo, active since 1970’s, mark E. SPENCER.