Opinions on this turquoise?

I bought this ring for myself because it was so gorgeous that I couldn’t resist. It is only marked ‘sterling’ on the back. Probably Navajo, but I’m not certain.

What kind of turquoise do you think it is?
I was thinking White Water from Sonora, but I really don’t know.
Any opinions would be appreciated! 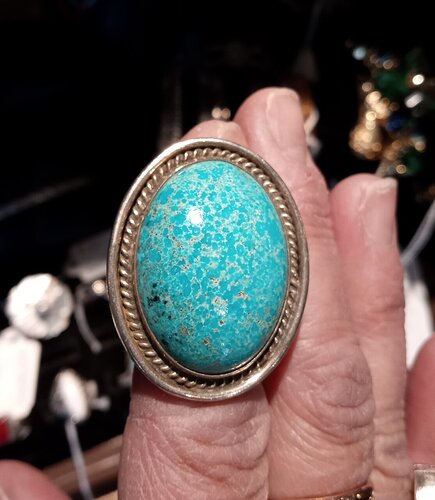 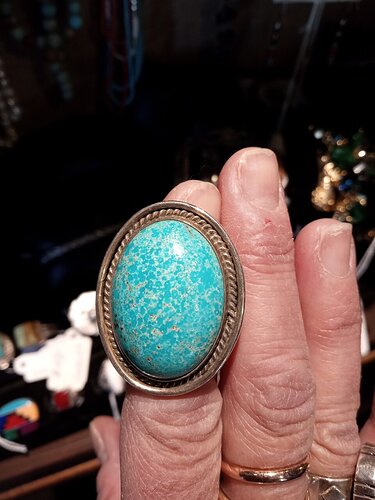 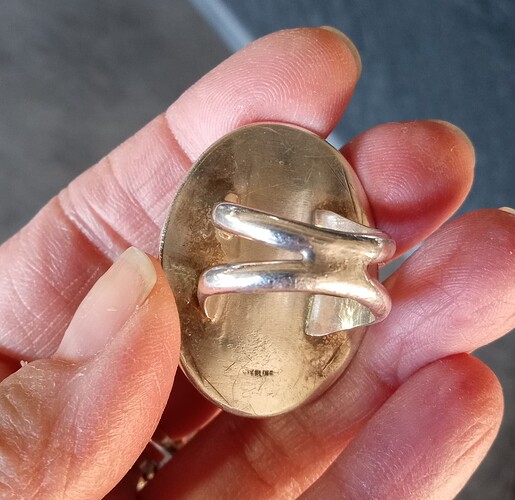 it is difficult to determine, doesn’t really take on defining characteristics of any certain mine. 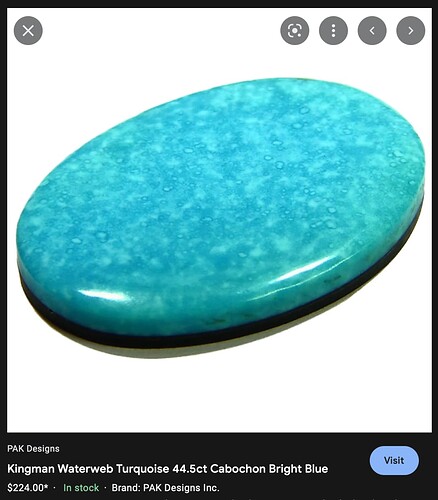 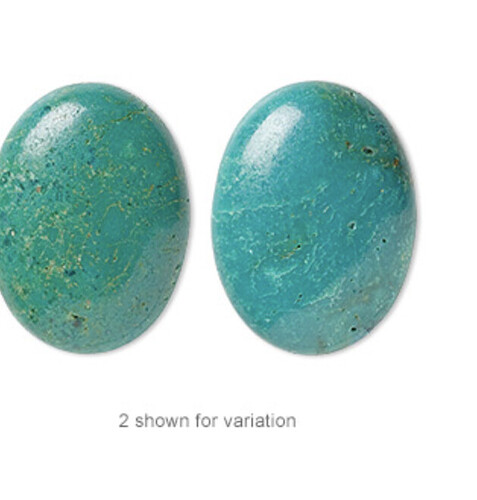 @Jason
Thanks for your reply! I found it in a little antique mall in Los Lunas NM.

My first thought was Kingman, but then some examples from Mexico started to look similar.
I guess we never really know unless we see it extracted from the ground!

Wow that’s a HONEY of a stone! Yum!
It would be helpful to see a side view of the setting to determine origin. The outer bezel appears to be a pressed roll, rather than a ridge built atop a flat platform sheet of sterling which indicated US and Middle American design. The only older pieces that have a similar look are a subset of Zuni that have a roll around the edge, but it is still built on a platform and you scan see the joint where the thin silver roll was draped around the edge. 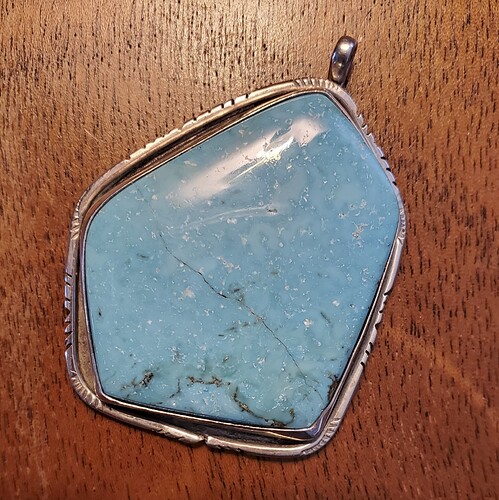 Note the joint at the bottom of the outer ridge on this very old Zuni piece.

Generally though, a thicker uncut base layer with the bezel pressed into it would indicate Persian silversmithing where they have some of the equally excellent turquoise mines in the world, many still in production. (India bezels are usually raised like clear stone settings to let light in or give the stone more prominence.) Also the rounded edge seen from the back, rather than a cut plate, and the dimple along where the bezel was possibly pressed a bit too deep in one spot are also indicators.

I have bought several Persian pieces in NM & AZ shops of high regard, that were just to pretty to shun based on location. Trading posts buy mixed lots for resale and invariably there’s global pieces mixed in. Similarly, many of the dealers and trading posts in the Southwest US have even begun farming out their branded inlay designs to be made in the Philippines as demand outstrips the supply of native hands and mines for production.

This is one I have to get better shots of, but I can’t get my daughter to take it off!

The picture does not do it justice because of my tons of turquoise this is one of the most hypnotic stones in the stack!!! Turns heads across the room! 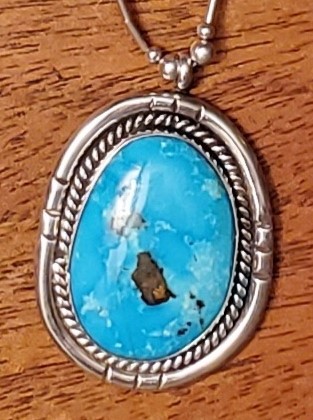 @evanbuddenbohn
Yes, I’ve been thinking that it was White Water for a while. Thanks for your input!

@Suzama
Thanks for your detailed reply.
Here are some side shots. It looks like straightforward Navajo construction to me. You can see that the frame is made of round wire, placed on top of the base plate. There is a gap that didn’t get polished out, as noted by the red arrow.
There is also a gap in the bezel, which annoyed me at first, but I got over it! 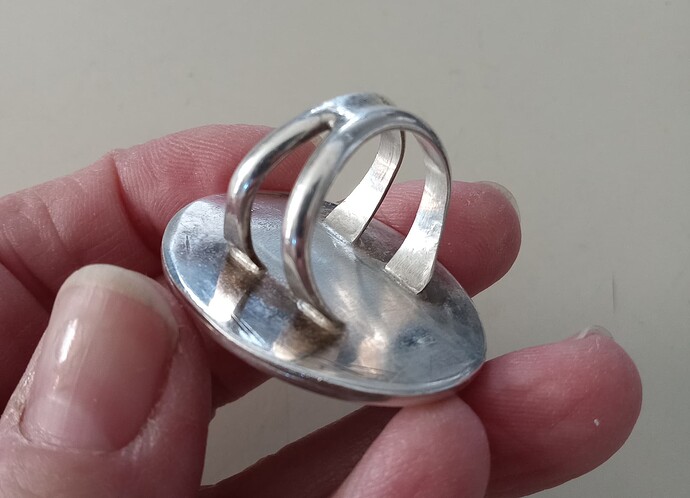 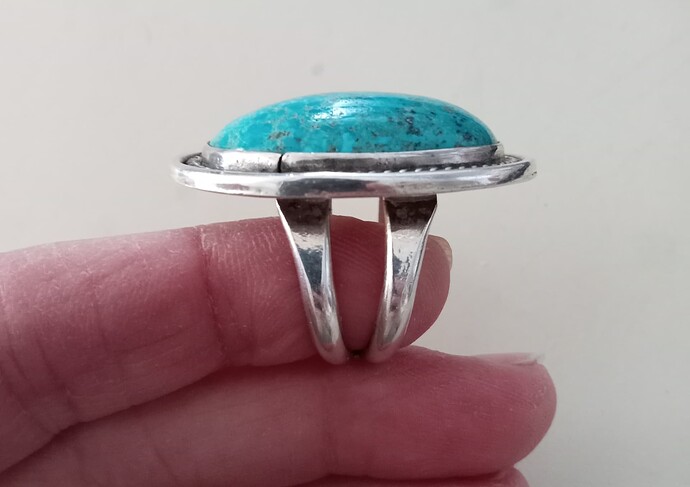 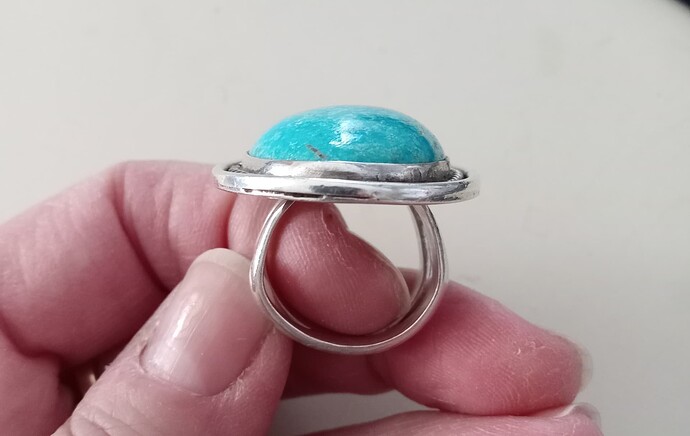 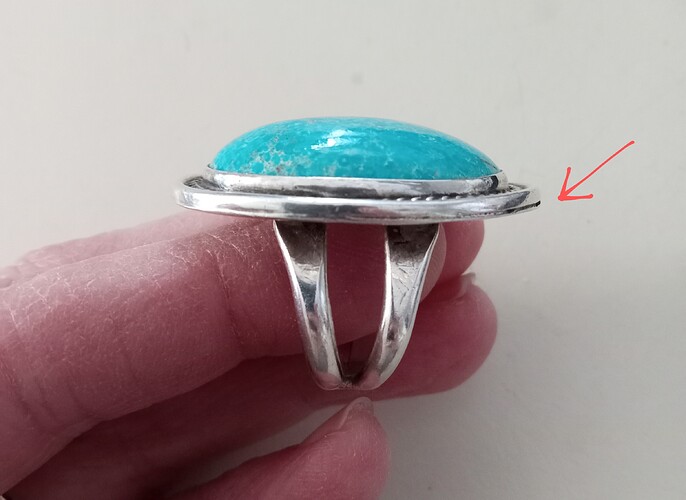 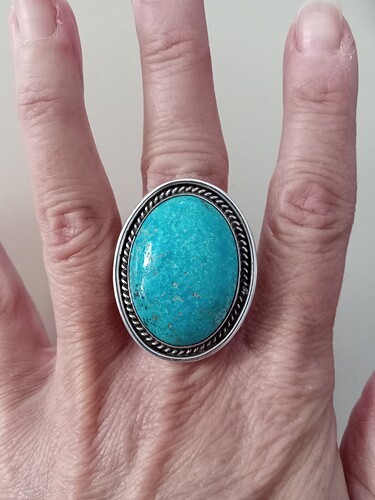 Droool! Definitely built on a platform, no joint visible in the edge bead is high-skill craftsmanship, no less than that fantastic stone deserves. Spot on Native construction! That’s it’s white water I don’t think is even up for debate that’s 100 and agree with you on Navajo. I would be so proud to have such a piece in my collection. I’m just gonna drool on these pix for like another hour! ;D

The thing I don’t understand is the shank. It’s not a typical Navajo split shank; it looks like two pieces fused at the back, a highly irregular concept, and to my eye the proportional relationship of stone, twisted wire, and bezel is not entirely in accord with what I’d expect from Navajo work. So to me it doesn’t speak Navajo, without better info on its origin.

Hmmm…always debate possible on the mine if you don’t have provenance. I don’t know much about white water, but it also looks quite a bit like the Kingman Jason posted.

@chicfarmer
I wondered about the shank, too. A wide shank is important on a big piece like this, and maybe the maker was just thinking outside the box.
If you don’t have large size half round wire, why not be creative with what you already have?
I make sterling jewelry myself, and I sometimes improvise with materials I already have rather than running to the supply store.
I’m also not ruling out Anglo made.