I have posted this before a year ago but haven’t had much luck identifying it. Has anyone ever seen this particular style? It was given to my mother as a gift back in the early 70’s. It’s one of my favorite pieces and would like to know more about it. It does have a Hallmark on the back but I have been told it is too hard to make out. 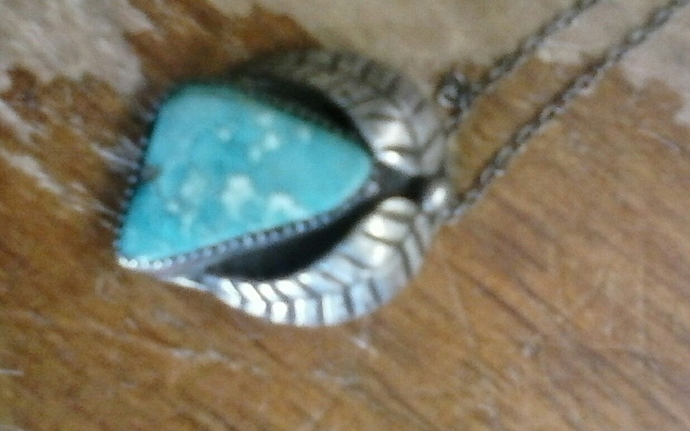 Can you try to take another picture of the hallmark on the back? Also, even if you have to pull the camera further away, a sharper picture would help.

Is this larger than a U.S. quarter or about the same size?

The style is a Navajo motif with a rain-bead at the top and two elements that I’ve seen described both as leaves and as feathers. To me, with the rain bead, these look more like leaves. When you are looking at the pictographs in person, what do they look like to you?
I say “they” because it looks like two elements here.

Give me something to go on.

The oddest pictograph signature on something I own is Sam Lovato, so I tried to make yours into a partially obscured Sam Lovato signature, but it won’t work.

You are right. At first I thought it was an E, and possibly an M beside it. When I turned it sideways it looks like an animal with a tail. I still can’t t make out the possible M, but sideways it could be a bird.

I’ve tried to focus in more, I know it’s still blurry but more of a close up.

I am not completely sure about this, but if I imagine this was pressed lightly and is a little worn, it works.

If there is a faint outline of a bird above these two marks – it may be mostly worn off – this is a hallmark for Gilbert Ortega Enterprises.

You can google Gilbert Ortega Enterprise & the dealer Gilbert Ortega. His obit says “His stores became one of the largest Indian art dealerships in the country, and his career spanned nearly 50 years.”

I don’t know what years the hallmark was in use, but I’m guessing some period during 1960s-1980s.

(Another example, though for a different establishment: I have a piece with TT hallmark for Tobe Turpen, which I think is the shop that Perry Null took over.)

Sorry it took so long to reply. I did some research on Ortega and his pictograph Hallmark you posted. I couldn’t make out anything similar on this piece, so I went and got a magnifying glass and took some pics through it. Hopefully these are better. Thank you so much for your help and patience as I try to learn more about it. 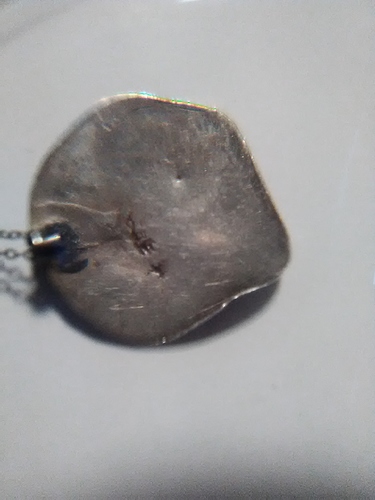 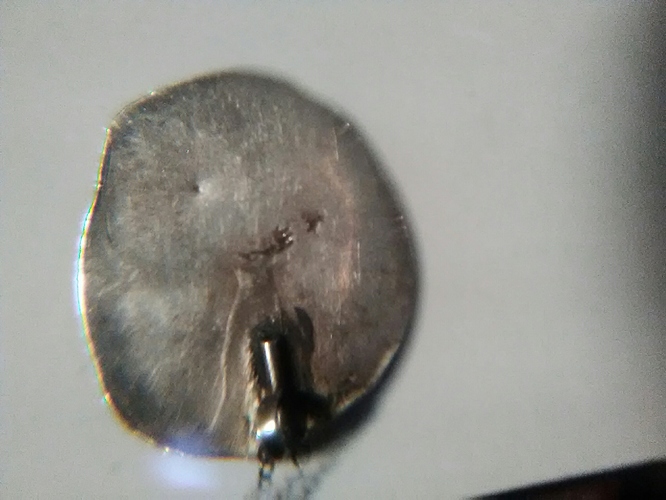 Sorry, that’s all I’ve been able to find for you.

My theory for this piece is still that it got the Ortega stamp, but mostly the lower part.

Jewelry is hand-stamped, so they are not always perfect. As Jason has said here in other entries, sometimes the artist forgets stamping entirely, then hand-scrawls a signature when asked. I’ve got pieces that an artist has stamped twice, one superimposed over the other, and pieces where part of the stamp is clearer than others. I’ve got a very nice piece that was so unevenly stamped the seller thought the initials were someone else’s. I’ve also seen upside-down stamps.

Hope someone else can find a match for you.

I’m so thankful for all your help. I tried to see any faint lines that could out line the wings. That’s why I bought the magnifier. I took some shots from different angles to see if it could be something I missed. I will go with you on it being Ortega’s and all the education you offered as well. I’m thrilled to find anything about it at all and I thank you very much.