Could you help me identify this bolo marked En or EV? Age and value if possible, also 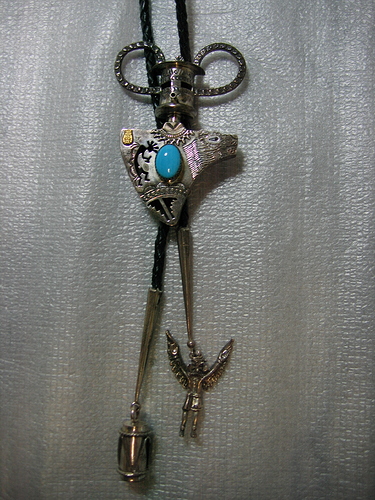 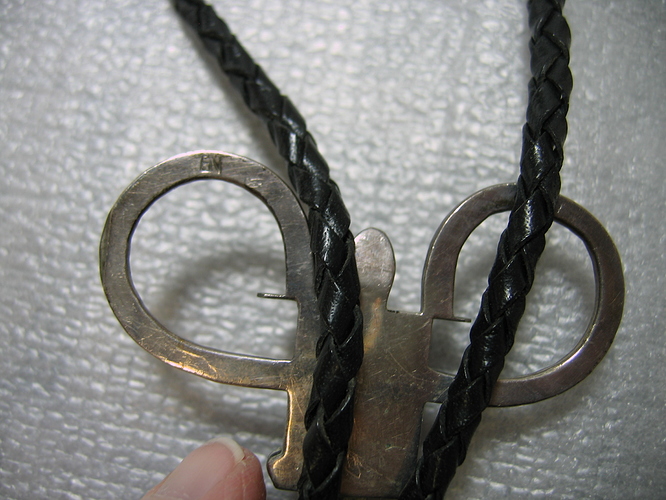 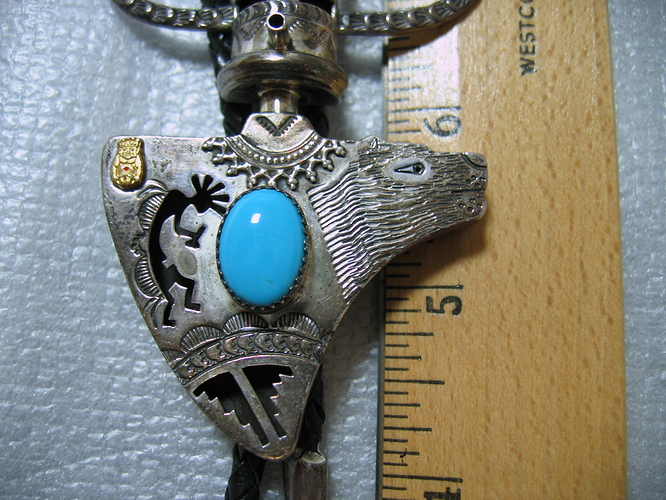 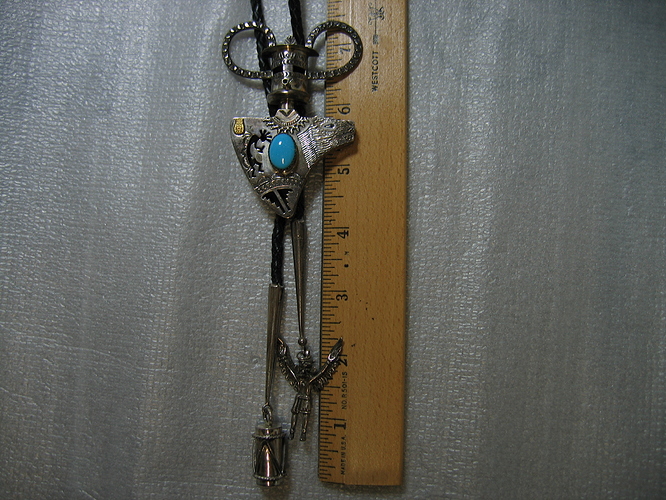 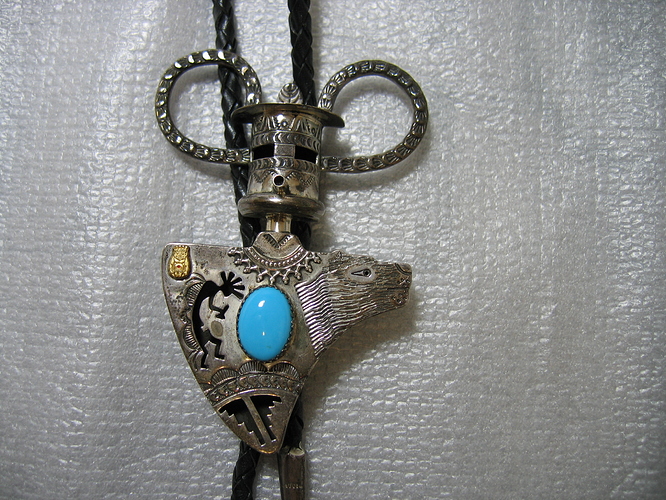 This is quite large, measuring almost 8" not including the leather. Tests silver. I didn’t test the little gold piece. I’m assuming it’s an artisan piece that’s fairly recent. Any help you can give will be very welcome.
Thanks so much!

It is marked sterling and I think the maker mark is EN. 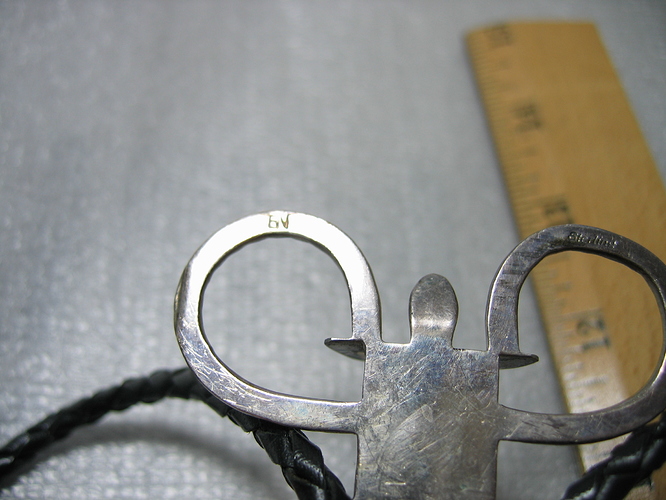 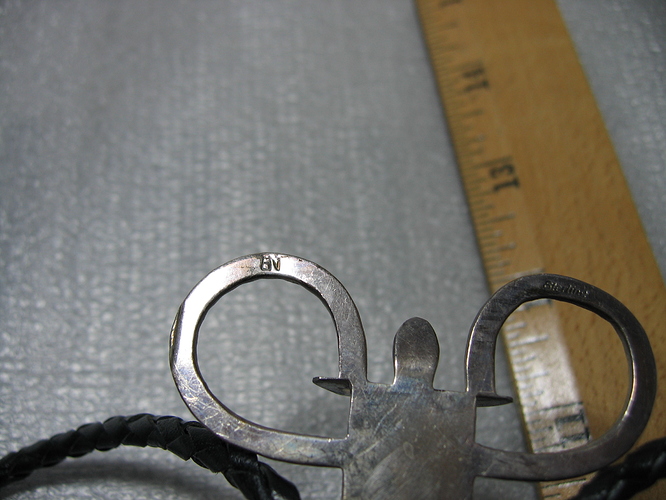 I looked through one of the hallmark books for EN. Came across a name Ervin Nakai and did a google search. https://www.ebay.com/itm/Navajo-Old-Pawn-Sterling-Silver-Kachina-Mask-Eagle-BOLO-TIE-Native-Made-in-USA-/292764505263?oid=382560716420 Not sure what I think. The listing doesn’t give a name but the styles are similar. It was a dead end here.

Thanks so much, Jason. Mine has a lot more detail, but they must be by the same silversmith. Do you know what character is represented by this mask? Thanks again.

I don’t know the figure, sorry. Navajos do not have kachinas like the Pueblo. If this is a Navajo artist I imagine it is just meant to be a representation of any kachina.

That little gold guy is a billiken!! I think they are nifty! Nice bolo for sure!! 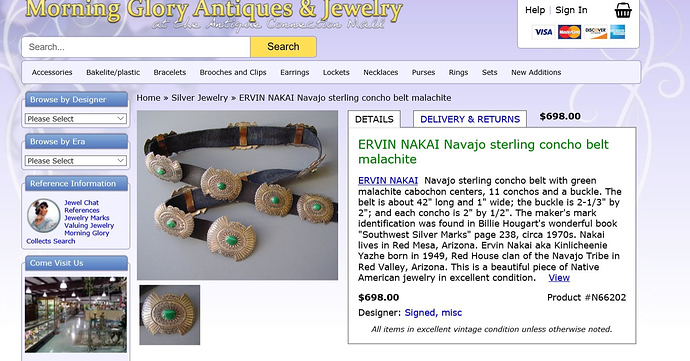 Hello my name is Adam Vance. This Kachina Bolo is great. I was told that a kachina will speak to you and this one definitely has my attention. Are you willing to sell this piece by chance?

I would love to sell it. I have no idea of the value.

I am not sure either. A unit I just joined raise money for native American teens on the reservation to go to high school at better schools. Pretty much sponsor scholarships. Also this piece has the billiken that associates with my unit. Just let me know what your price is. Thank you.

Okay, I need to know what a billiken is and why it would be on a Native American piece.

Billiken is a symbol of good luck. Some ties to Alaska, but it goes back to the early 1900’s. Not sure why it’s on this Native piece.

The Billiken is a charm doll created by an American art teacher and illustrator, Florence Pretz of Kansas City, Missouri, who is said to have seen the mysterious figure in a dream.[1] It is believed that Pretz found the name Billiken in Bliss Carman’s 1896 poem Mr. Moon: A Song Of The Little People . In 1908, she obtained a design patent on the ornamental design of the Billiken,[2] which she sold to the Billiken Company of Chicago. The Billiken was monkey-like with pointed ears, a mischievous smile and a tuft of hair on his pointed head. His arms were short and he was generally sitting with his legs stretched out in front of him. Billiken is known as “The God of Things As They Ought to Be.”

To buy a Billiken was said to give the purchaser luck, but to receive one as a gift would be better luck.[3] The image was copyrighted and a trademark was put on the name. After a few years of popularity, the Billiken faded into obscurity. Although they are similar, the Billiken and the baby-like kewpie figures that debuted in the December 1909 Ladies’ Home Journal are not the same.

In 1909, the Billiken began its appearance in souvenir shops of Alaska. In Nome, Alaska, an Eskimo carver by the name Angokwazhuk copied a Billiken figurine in ivory brought to him by a merchant. Since that first appearance in Alaska, some Eskimo carvers began to include the billiken in the collection of figurines they created.[1] By the 1960s the Billiken was ubiquitous in larger Alaskan cities like Anchorage, and heavily touristed areas. Billikens were often carved from Alaskan ivory and were used in jewelry and knick-knacks. Often these souvenirs were accompanied by printed, romanticized Billiken lore. In Anchorage, the name was also adopted by merchants, as in the Billiken Drive-In movie theater.

There is a very interesting research paper on the Billikin here. https://reflectionsnarrativesofprofessionalhelping.org/index.php/Reflections/article/download/499/348/

I don’t know if i can link to it from here, but let’s try - saw this and remembered this conversation. https://www.shopgoodwill.com/Item/81840293

I saw this and bought it!

I’m glad you got it. That one was really cool.