not sure why this thought happened but u folks know how inspiration floats around until it hits u when ur not looking.
Why don’t I see dogs in/on NA stuff?
Insects,birds,reptiles,amphibians…some bear or bison,a few horses but the only dog is the “snoopy” inlay? Or the howling wolf/coyote wearing a bandana.
Thoughts?

A lot of Fred Harvey jewelry, both bracelets and pins, has a figure that’s read as either a dog or a horse. Also dogs occasionally appear in storyteller bracelets, when the imagery includes sheep and/or pickup truck.

THIS IS ONE OF A PAIR OF CLASSIC, FRED HARVEY ERA HORSE OR DOG PINS THAT I AM LISTING SEPARATELY. IT CAME FROM AN ARIZONA ESTATE AND IT STILL HAS THE ORIGINAL PAWN NUMBERS ON THE BACKS. I HAVE SEEN SI

You will get a plethora of answers on this topic! The Dog/horse on Fred Harvey era jewelry was not a Native American symbol, but rather a symbol created by Europeans in the Native American fashion to sell jewelry. This is well known about the Harvey Era Jewelry.

I have a link for you to find out more. I have a great love of dogs myself, and despite that, I have eaten dog on three separate occasions. Once with my tribe, the Cherokee. Once at a pow pow in Anadarko, and once in Wyoming with the Cheyenne. While some Europeans may find this draconian, they are missing the point. I suspect that the lack of representation of domestic dogs in NA work may actually be more due to sacred respect than anything else. Eating a dog was not a thing done lightly. These animals were your loyal friend, protector, and fellow laborer. To give one up to the pot was a very big deal! It was used to seal a deal or agreement that needed special emphasis, to appease angry spirits, special ceremonies, and in times of famine.
I will not comment on anything else other than it was a very humbling experience! 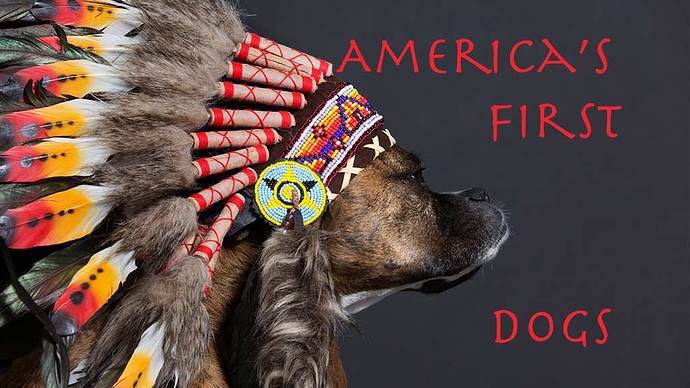 American Indians and Their Dogs: A complex life of love, work and togetherness...

Nomadic tribes from Asia brought dogs with them to the New World and for thousands of years, they were Native American’s only domesticated animal. Fiercely guarded by tribe women, they were used to drag sleds, help hunt buffalo, used as a food...

I think dogs are a mixed subject for many cultures. Dogs have been a friend of humanity since the beginning of time. I have no doubt that there is ambivalence, as @Christibo says, about dogs given the food vs. friend/companion status. Maybe this is why dogs aren’t a big motif for jewelry if it’s complicated like this.

The horse being synonymous with dog in some applications is indicative of the idea that Europeans introduced the horse to North America and that they called it a “big dog”. https://canafoundation.org/canafoundation/american-indian-horse/#:~:text=Native%20Americans%20often%20referred%20to,as%20members%20of%20the%20family.

Even though history shows that horses were always there: https://indiancountrytoday.com/news/yes-world-there-were-horses-in-native-culture-before-the-settlers-came ).

At any rate, dogs and horses are intertwined in history between NA tradition and European views. Perhaps this is why Harvey pieces had a dog/horse icon incorporated.

All IMO and theory. 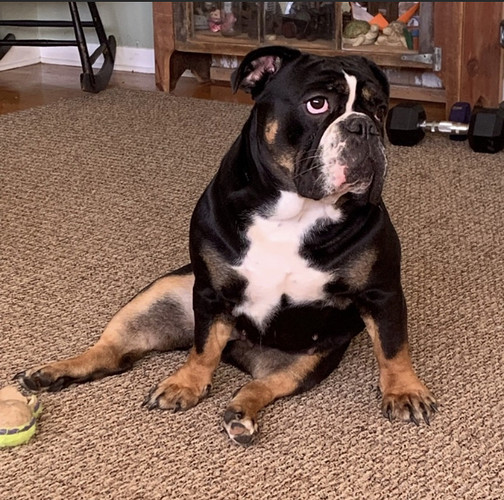 He’s so cute!! But he doesn’t appear to be thrilled with the previous discussion… 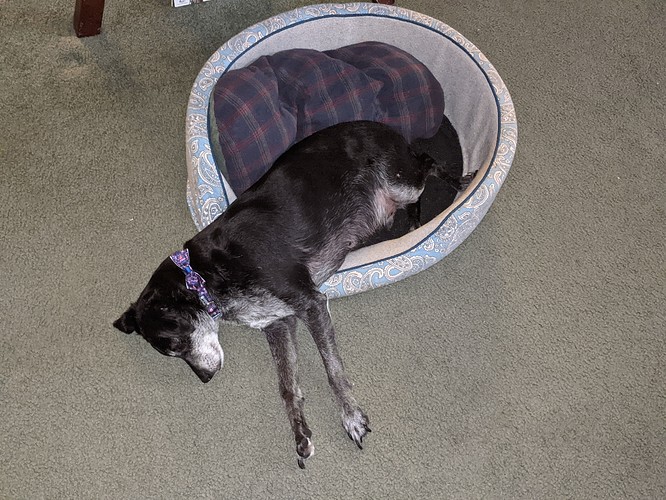 The old blind man at our house. He wears a bow tie.

He’s cute too! My cat Poppy (who passed this past May☹️) used to lie on the couch with her head hanging off. Like, why?!

Never understood that! Haha. How that can be comfortable, I’ll never get it. My old cat did the same. The animals are cooler than us! Wish I could sleep so peacefully in any crazy position. I wonder if they search for new, more comfortable positions as they grow older. The younger one, She actually fell asleep like this. 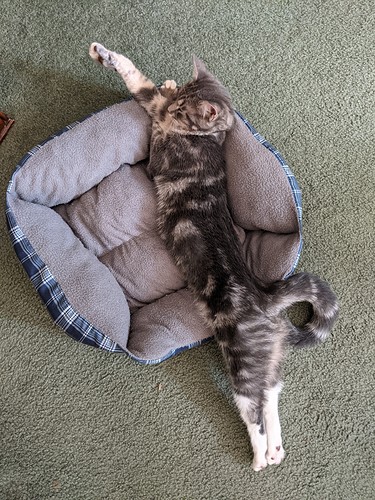 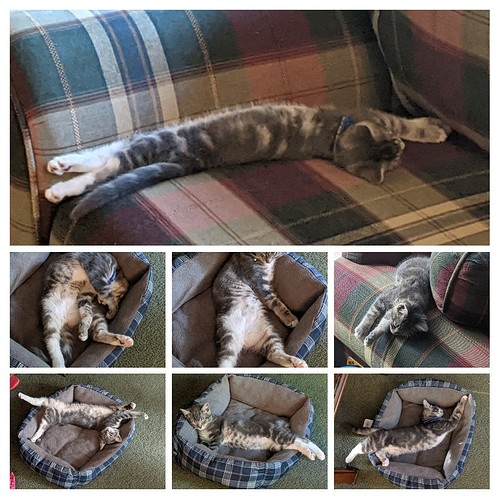 @Xtina Your collage of photos is too funny. If kitty has money, the bottom left photo is blackmail worthy. They all remind me of Elf. 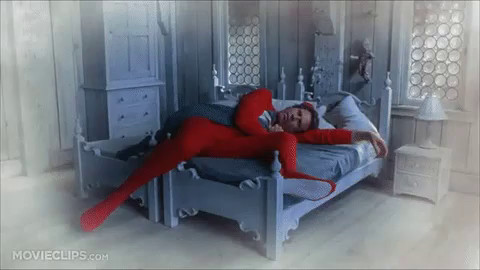 I love your kitty! We will get a new one soon. When we first got Poppy years ago, I couldn’t find her once. Till I looked here… 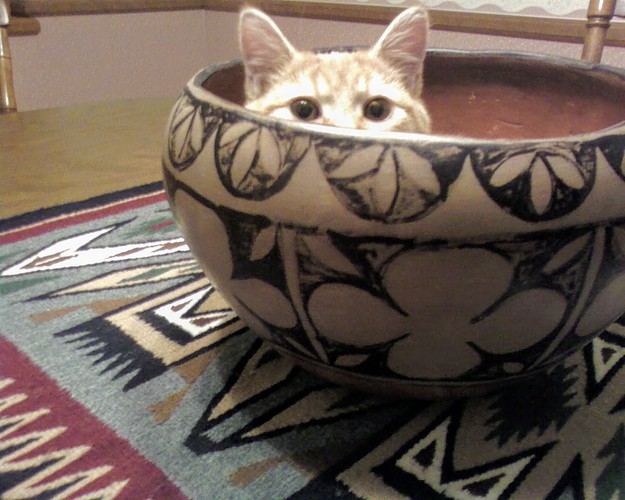 (I’m not sure this uploaded; it looks different as I type this)

Oh, I have such great kitty blackmail tools. LOL 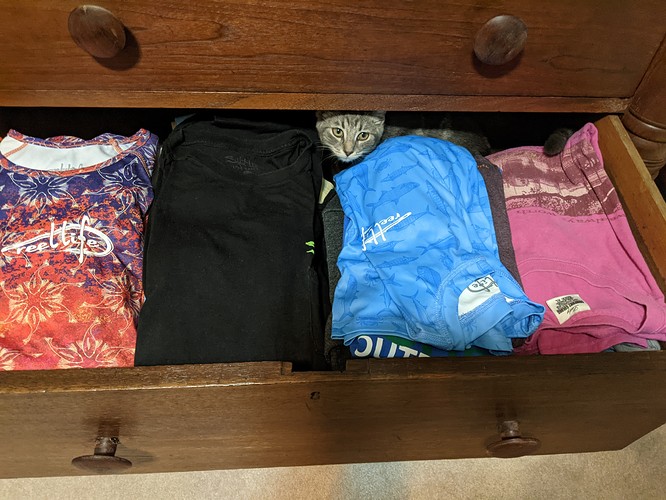 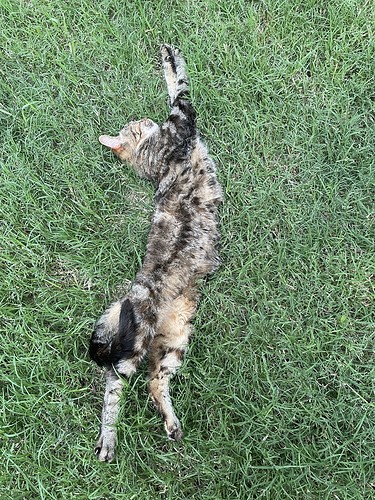 I hear you on that; used to do that with my Poppy as she got older.

What a pretty one you have too!

Wow, so stretching out will last throughout a cat’s life. I know what you mean about checking to make sure they’re breathing… A very tense moment indeed!

We finally got a new kitty…she stretches out too! Named her Mosi - Navajo for cat. 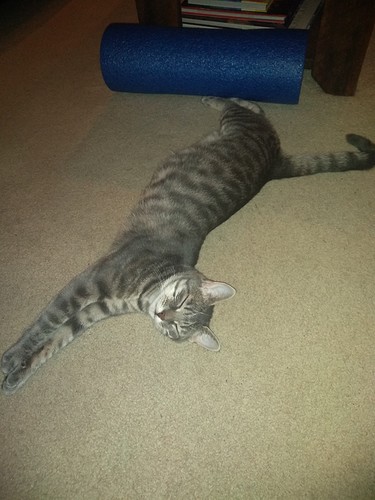 How do y’all like the way mine stretches out? LOL