I just received this ring I purchased that called to me. It has a dragonfly symbol in the center (or Cross of Lorraine). The seller said she purchased the ring from a pawn shop in New Mexico 20 something years that is no longer in business. I’ve really never seen a similar ring. Any comments or opinions are welcome. 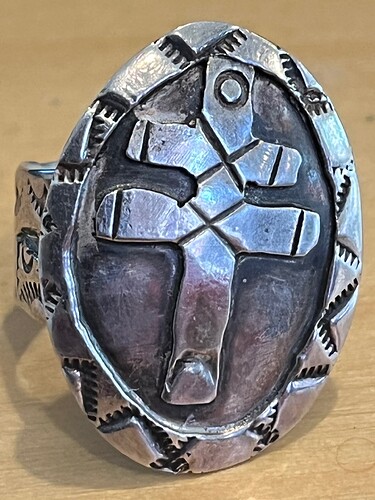 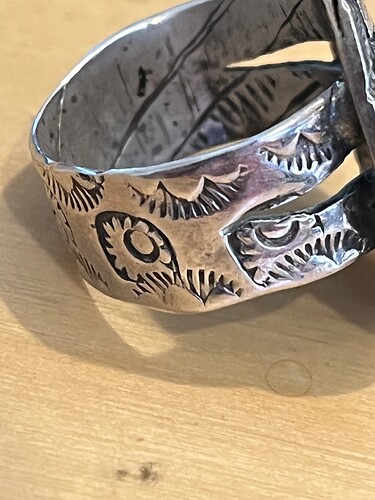 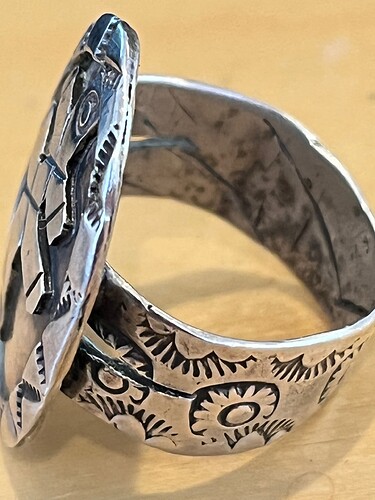 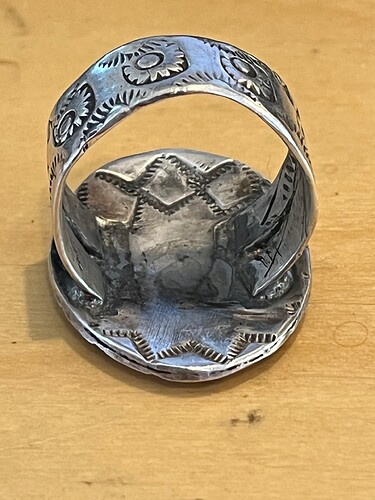 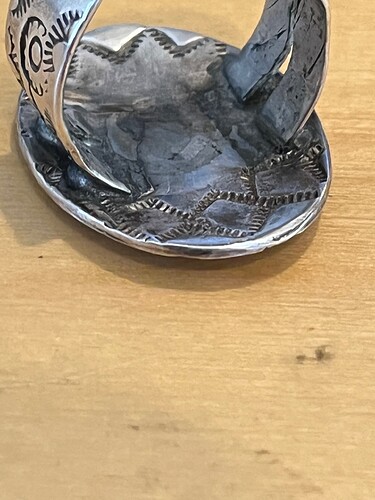 My comment is, it’s faaabbbulous. I always think of the dragonfly imagery in older pieces as being Pueblo work. Have never seen this in a ring. Looks like ingot: what’s it weigh? Congrats!

It’s not very heavy, 10g. She believed it was ingot also

Joe, you find the coolest stuff.

Thanks Tom, my wife and I have a thing for dragonflies so when I saw this I thought it was very special and unique. There is a Kevin Costner movie called “Dragonfly” that we both love. If you get a chance check it out.

It’s beautiful. The stamping on the band is lovely. I always thought it looked like a cross (double one anyway) but had only heard it symbolized a dragonfly. Interesting.

I think it’s generally considered to be a double barred cross, but also a dragonfly. I’ve read that when the Catholic missionaries came to the pueblos, the Pueblo people took readily to this symbol, hence the popularity of the Pueblo cross necklace. It made the missionaries happy, but what they didn’t realize was that it was very similar to existing symbols for dragonflies, popular in Pueblo culture because of their association with water. So not all who wore it were wearing it as a symbol of Christianity. There’s a book about these necklaces called “The Heart of the Dragonfly,” by Allison Bird. I recently picked it up after having wanted it for a while but haven’t had a chance to read it yet.

The ring it super cool; I haven’t seen anything like it before.

Thank you for the info! I was gonna Google it, but didn’t have time till now, but you were a step ahead of me. What you said rings a bell, so I must have read that somewhere and forgot.

Dragonflies are pretty amazing, and the cross has deep meaning for me, so maybe I’ll have to find one for myself eventually. But not that ring…it’s definitely one of a kind!!

I think missionaries had high hopes for the adoption of the Christian cross, but dragonfly symbolism is right. 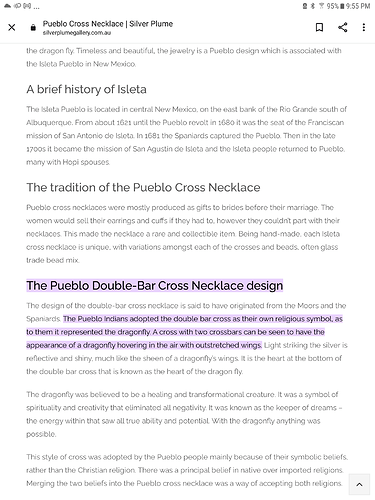 Great ring! Unique and got some age.

Got a pendant to match my dragonfly ring. Don’t know anything about it or age. It is marked sterling and stamped on both sides. 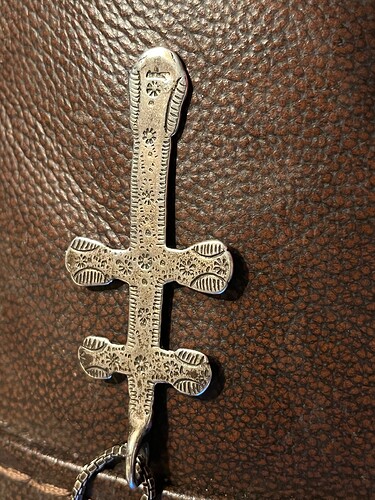 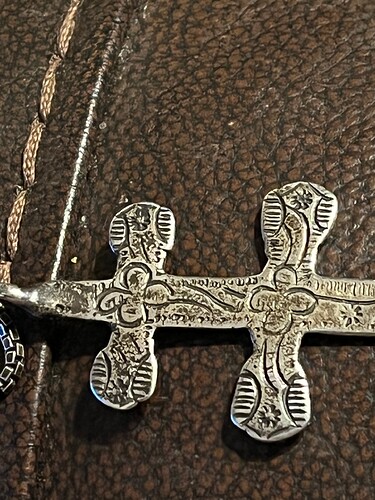 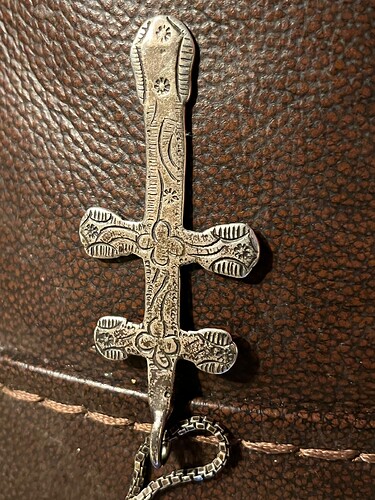 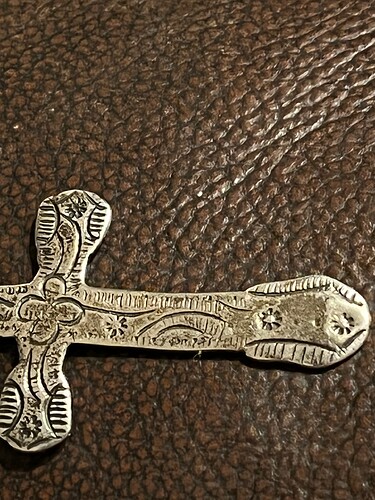 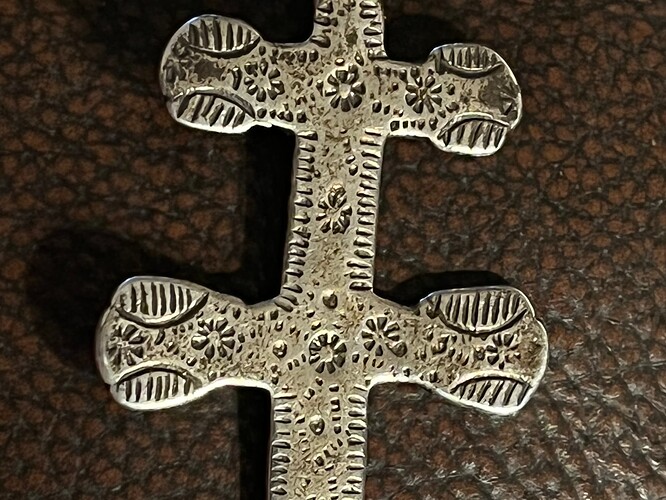 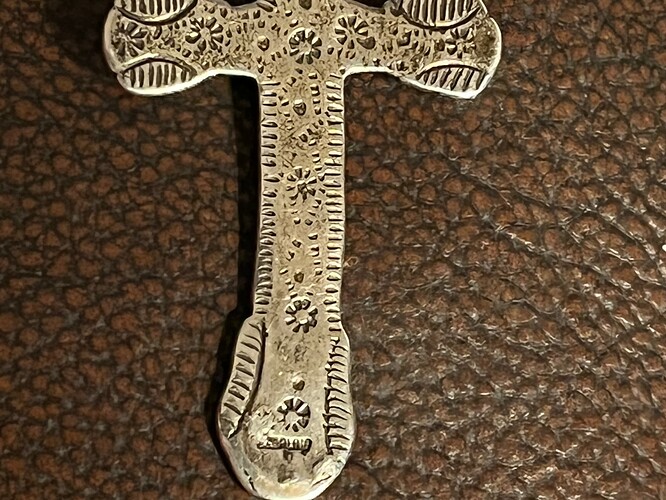 Very cool! I did a quick look around and think it might be a trading post piece, like the one linked. It doesn’t help date it, though, if Fred Harvey stamps are still in circulation and being used, as Silverplume states. This must indicate that there are both vintage and recent examples.

Thanks chicfarmer, that makes a lot of sense. I’ll probably never know for sure especially with no hallmark to help. It’s a nice partner to my ring though.

Fascinating read, thank you. How old do you think that ring is? What do those stamps mean that they always put on there jewelry?