I had this pair of clip earrings for some time and never wore them. I saw on a Facebook group that someone had an artist make theirs into a ring. So I sketched up my idea for a ring and contacted silversmith Bennie Ramone through that group, who did a wonderful interpretation for me. I’m delighted! 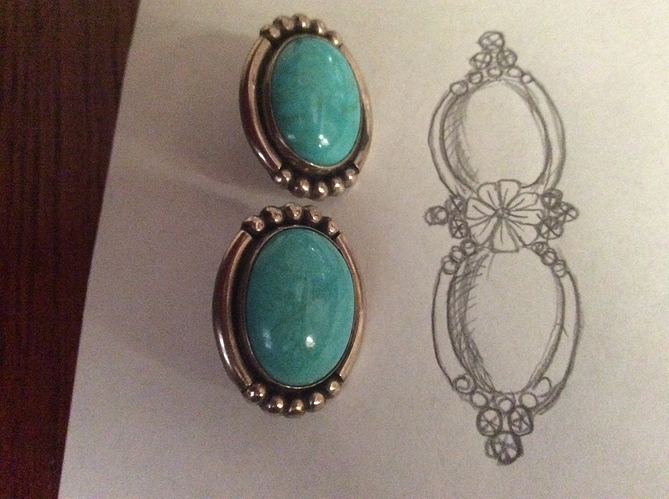 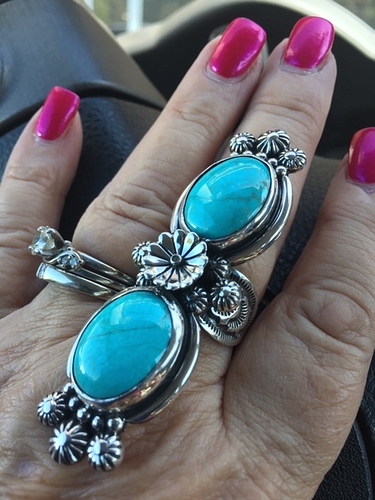 I love custom design jewelry…these made a lovely ring! I’m always looking for ideas, thanks for sharing. I wouldn’t have thought of earrings to a ring.

P.S. amazing the difference in color in turquoise in different lighting!

That is gorgeous! and brilliant!

What a great idea and it looks beautiful! I have an old watch cuff that I would like a stone put on where the watch would go I wonder if that’s possible!
And look at your beautiful nails- mine look like a wolverines been chewing on them

Love the new ring! I just started that FB site today after stumbling across it.

Hi Shelley, The first Facebook Group is called “Native American Jewelry Lovers” and the second is “Southwest and American Indian Jewelry For Sale”, I’m blanking on which one the artist is a member of. I joined both at the same time, and I get the impression people are members of both as they post in both and they bubble up at the same time on my feed so it’s hard to distinguish between the two! I’ll bet if you message JMM she’ll tell you who did the work.
edit: Oh duh, she says right there Bennie Ramone, I should double check before I post days later

Thank you! I’m pending on both

A small caveat - there can be drama I’ve noticed, but for the most part, not too bad.