This big chunk of turquoise took me some serious trading to acquire. It looked so much like Dry Creek to me that I checked and the Valley Blue mine was pretty close to DC mine and apparently only worked about 20 years around the 70’s. The back is hallmarked by Martinez and then inscribed in what appears to be his hand. It reads “ Valley Blue, 243.9 carat.”. I only have the seller’s pictures because I’ve been in the hospital. The stone is natural and the unusual band makes removing it tricky. Putting it on is fine and once on it’s comfortable for the size and stays in place.
I’d be very interested in hearing what anyone might know and an appropriate value. 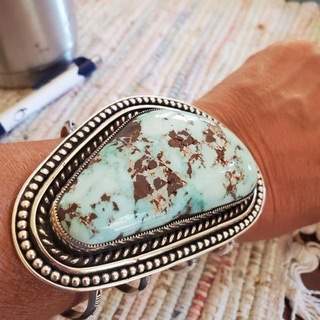 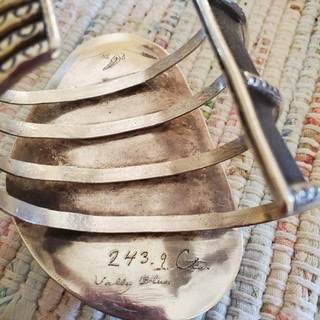 Still praying for a complete recovery for you.

Thank you! That band had me a little but I’ve had it on all day and it hasn’t shifted one bit. I got out one of my Dry Creek rings earlier and it looks great together. I took a picture and sent it to the woman I got it from, she was amazed. It is one thick chunk of stone. I’ll see if I can add the picture of them together. Not my best photography but it will have to do for now.
I’m coming along quite well. It’s just going to take time. Thanks for prayers. They have helped a lot❣️ 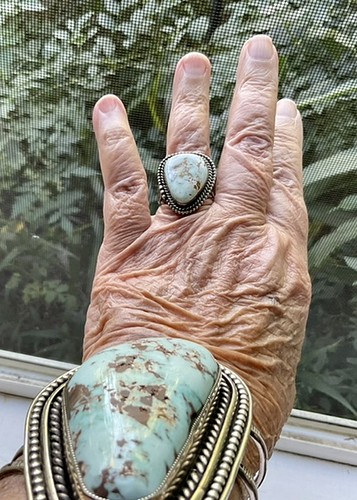 That is a big chunk of amazing turquoise! Looks great with the ring. I like the unusual shape.

I bought a pawn ring (it came with another Tobe Turpen pawn ticket!) years ago that was a big, very light colored Kingman turquoise stone. At one point someone told me they thought it was Dry Creek turquoise, which meant little to me since I had never heard of it back then. Well…after wearing it for years it became much, much bluer. I imagine that means it’s natural turquoise, but not Dry Creek. Funny thing was my hubby never really liked it originally, but likes it much better now that the color deepened!

@Jason do you happen to have any further info about the Valley Blue mine and maybe an appropriate value for this beast that makes me feel like superwoman? Thanks for your help!

LOVE these!! You find such great pieces.

Glad to hear you’re on the mend.

Beautiful piece!!! I love it!

is that who I was thinking of? crossed arms, outstretched,bracelets as shields? cuz shield sure came to mind when seeing that monster

I am not familiar with the turquoise, did do a search and found a pice selling for $8 carat. It was a small piece, not a massive chuck like this. That stone is thick and could easily be a couple hundred carats or more. The bracelet looks like really nice construction and has a good look, silver really compliments the stone. Sorry, has the carat weight on the piece. I think of this as a $750 - $900 cuff.

Thanks @Jason for your help. My search didn’t turn up very much either. Mined about 70 for 10-20 years. Very hard to find info on Eugene Martinez. Hougart’s said Paiute. Did find that Valley Blue was located close to Dry Creek mine. I know it’s definitely my Superwoman cuff. Thanks again

So glad to hear you are getting better! My wife and I just went through covid in September. The sickest I have been since having meningitis in my 20’s, and I am vaccinated.
Another great piece you have found, gorgeous! I am sill waiting for my adoption papers from you!
All kidding aside, check this out from the Durango Silver website, especially the section on Sacred Buffalo Turquoise. 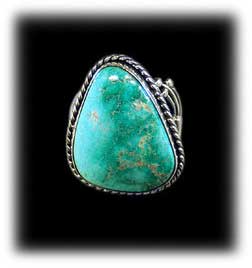 And this cab for sale: 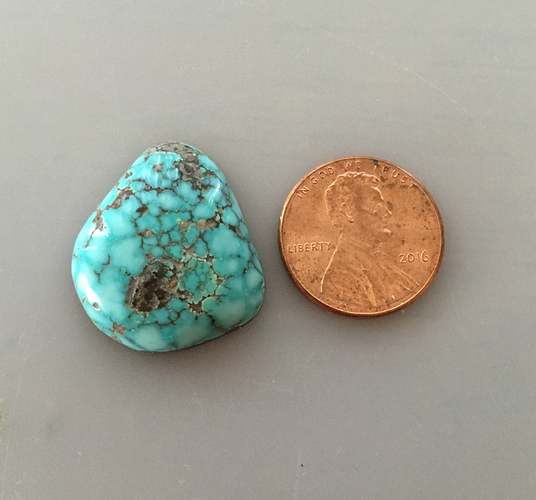 Does look similar to Larimar coloring.

So good to hear from you. Mine has the same brown matrix as Dry Creek so I’m really wondering if Martinez names it correctly. Going to read your link. Thanks

I’m going to have to do more research because I need to look at other specimens. So far have not found much but I’ve had brain fog from all the meds. It just looks so similar to Dry Creek and I think I read the mines were near each other. So more research to follow. I thought the band might turn out to be annoying but it goes on easily and doesn’t shift. It takes a little finesse to convince it to come off. Perfect for me because so often these big cuffs walk around. I just can’t let the Dry Creek go just yet. Sacred Buffalo next.

There are anumber of articles that reference that this turquoise came from the Dry Creek mine. Read as many as you can. From what I can understand, it comes from the Dry Creek area, and the mine was called Dry Creek at one time, but is not the same mine that is referred to as Dry Creek turquoise today. Some articles directly link it to the Dry Creek mine we know of today, but some others attribute it to another mine. Add to this "White buffalo turquoise " marketed by th Ottesson family (wihch is not real turquoise and the family does not claim it as such) and it gets really confusing.
Here is a part of an article describing what is called sacred buffalo turqoise.

Sacred Buffalo Turquoise
ranges from pure white to a pale blue, mostly a
pale robin’s egg blue. The matrix can run from a
very dark brown to a rusty color to a golden brown.
Some pieces have a lot of matrix and others have little
matrix. Oddly enough, though white turquoise is
super popular now, some years back they tried to find a
market for this white turquoise, which they referred to
as porcelain due to it’s white appearance, but at that
time few wanted. It couldn’t be dyed so they
didn’t do too much with it. Before his death
recently, the mine owner said the he didn’t find too
many of the coveted truly white pieces now a days, but
there was a time he just “threw it down.” Now
people are begging for this rare stone. It has
been through the efforts of our silversmiths offering
the “Sacred Buffalo white turquoise” to
the public that white turquoise has become so popular.
Apparently,
at one time this mine talked about in this article was
referred to as the “Dry Creek Mine,” but that
is not its name today. There is another mine in
Nevada that is today called the Dry Creek Mine also
known as the Godber or Burnham mine currently owned by the Woods family
located near Austin, Nevada. They are not one and
the same and are many times confused as such.

Sacred Buffalo White Turquoise, what is it?

This is a very debated question. Many claim to have the white turquoise, but, unfortunately, not all are being truthful. There are also many that misunderstand what this stone really is and looks l…

Another good, but lengthy article: 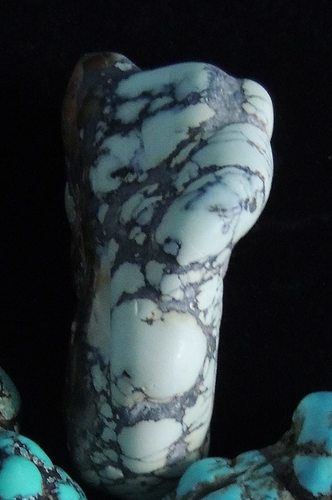 Turquoise Tuesday: On the Trail of the Sacred White Buffalo – NDN...

I highlighted a piece of an article I just read courtesy of you. 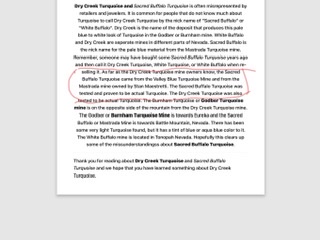 This is the mine referenced to be owned by Stan in 2 of the articles. The piece you highlited mentions this and the Valley Blue mine. 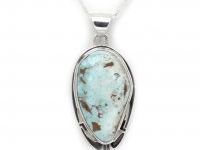 Jul 20, 2013 - When discovered in the Dry Creek Mine on the Shoshone Indian Reservation near Battle Mountain, Nevada in 1993, they were not sure what it was. Because of its hardness, they decided to send it to have it assayed and their suspicions...

Thanks for another lead. The beads appear to have a much redder matrix than the cuff. They do have a nice color though. Appreciate your help.