This is a bracelet I got from the pawn shop at a fairly low price. I’m sure it’s made of coin silver or ingot silver, but I’m not sure if it’s from the Fred Harvey era. It’s really hard to find references. Do you guys see this bracelet as genuine?

Interestingly, it seems that the swastika mark was engraved in the center, but the edges are erased for some reason. So it became a “cross”! 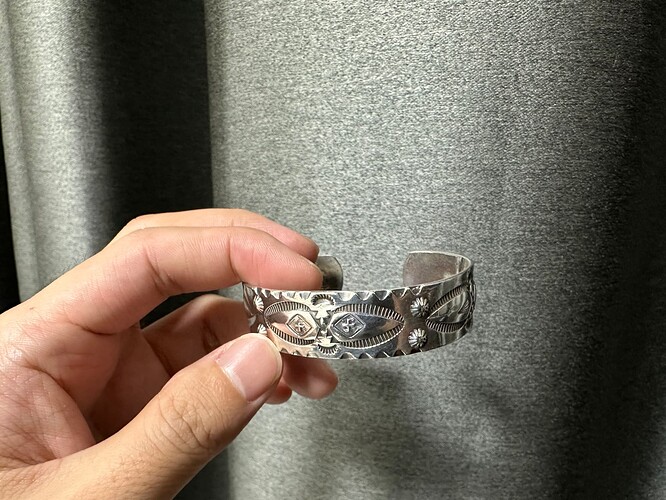 this is the closest match i can locate in the 5th edition.

It helped me a lot. thank you. I’ll have to look for some more references.

Interesting. It looks newish. Doesn’t look very worn for the Fred Harvey era; I’m not saying it’s not from then, just puzzled. What makes you sure it’s ingot or coin silver?

The reason it looks new is probably because I washed it once with a silver polishing cloth. Before that, I was sure it was coin silver because the degree of discoloration or patina was very similar to coin silver bracelets of a similar year.

Of course, I wrote in the thread because I’m not pretty sure that this bracelet is 100% original haha

some more info on the arrow novelty co. 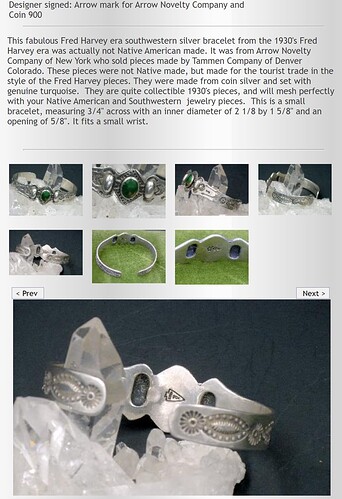 So in the copy it says the company used coin silver. The question I’m thinking then, with this piece, is… is it original or is it a reproduction? It’s shiny because @EatSleepTurquoise polished it, but it still looks newish to me, meaning I don’t see signs of wear on it. Maybe it just wasn’t worn much.

idk it’s giving repro vibes to me. if you look at the overall silhouette, it’s a completely straight strap form, even where it wants to show edge filing near the center. i thought that style edge filing was more of an older style, hand done technique than a harvey era shop done thing. it just looks a little “all the things” too me.

I’m not sure as to whether its a vintage railroad/tourist piece (don’t get me started on the term “Harvey Era”, lol, but I’ve ranted elsewhere here) or a reproduction, but I did want to comment on your statement that you’re sure it’s made of coin or ingot silver, focusing on ingot specifically. It is not made of ingot silver. Ingot means that it was cast as an ingot (block of silver), and then hand hammered into its current shape, a laborious process that requires a lot of skill. It refers to how the silver was worked, and is not related to the metal content of the silver itself. It can be difficult to recognize ingot silver by looking at it, but generally the tell tale sign is characteristic small cracks and stress marks on the underside of the piece. Tourist style jewelry (also called Fred Harvey style/Harvey Era) was marketed to tourists visiting the West by railroad. It was most often mass produced by companies such as Bell Trading, Maisel’s, or the Arrow Novelty Co. referenced above. By this I mean it was machine made, or it would be machine made and finished by hand, or they would have Natives working the press machines and call it “Indian made.” It was also thin and lightweight, as Anglo tourists preferred lighter weight jewelry and weren’t looking to spend a lot on what was to them just a souvenir trinket. In many ways it was the opposite of traditional Native jewelry, which was handmade (ingot or cast, or later hand made from sheet), and thick and heavy according to Native taste. But tourists didn’t care to learn what Native jewelry actually was, they just wanted to take something home that was superficially “Indian.” Occasionally Natives would make handmade jewelry for this tourist market, so you do see Native hand made tourist style jewelry, though the machine made stuff is much more common and the handmade stuff would still usually be from sheet, not ingot. So basically tourist style pieces are pretty much the opposite of ingot silver: either hand made from sheet or more often machine pressed.

First of all I admit that I chose the term incorrectly. In South Korea, where I live, it is very difficult to get information about Native Indian jewelry, so misinformation is easy to get around. I am also the case haha.

@Jemez2 has pointed out correctly, I remember when I bought this item, the seller said it was from the 1920s. I’ve lumped it together and just referred to it as the so-called “Fred Harvey era,” which was pretty vague expression. If this bracelet is truly vintage, it could be a bit older than what I said.

There are a lot of new things that I learned because of the perspectives that @OrbitOrange said. To sum up, the Railroad Tourist era items that we commonly know as ‘real vintage’ were actually thin and light items favored by tourists, not the traditional Native Indian method, such as hammered using ingot silver. .
And these days, I know that the modern artists I’m interested in make things like bracelets in the traditional way through ingot silver and hammering. For example Jock Favour and Jesse Robbins (these are some of my favorite artists). It’s kind of ironic…

Nevertheless, a silversmith such as the Navajo Arts and Crafts Guild which were representative of the Railroad Tourist era, are highly evaluated even today. What is the reason in particular? If you look at their bracelets or works, it seems that they have a little more craftsmanship or use elaborate stamps. Is that the reason? Or is it because it is only funny Hallmarked so that it can be identified as a reference?

I’m still not sure this piece is old. I’m still wondering if it’s a reproduction; it doesn’t have an old look to it - doesn’t look worn. What do the rest of you think? And I’m not talking about the shininess of it.

I’m not necessarily right. Let’s see what people think that have more knowledge than I do.

I believe the popularity of these pieces is because of the era they came from, kind of historical. We love stuff from our past.

@Ziacat One thing I want to be sure of is that the swastika pattern has been erased.
If this bracelet was made in 1920-30ish, there is a possibility that the swastika mark was erased by someone after the WWII.

Possible. Or maybe somebody bought the reproduction and didn’t want the swastika type mark on it and erased it.

But I don’t have the knowledge that some of the people on here do, so I’m really hoping someone jumps in on how old this could possibly be.

If it is a repro and has been bought by a certain customer in pretty recent time, would a buyer who had a negative reaction to a swastika really bought it?

Erasing the swastika means that someone hated the pattern, but if this bracelet is a reproduction and recently made, I don’t think someone who have problem with swastika wouldn’t buy it rather than erase the pattern. Just my opinion haha

I’m not sure exactly what you mean, but yes, I believe they do make reproductions with that symbol on them. And people still do buy them.

By the way, welcome to the site, it’s cool to have someone from South Korea on here!

Again, what’s giving me pause is the fact that the edges don’t look worn on any of it that I can see.

The Navajo Arts and Crafts Guild is totally different from the Fred Harvey/Fred Harvey style stuff.

The discussion is referring to Fred Harvey type jewelry not Arrow Novelty Company, but still similar topic. Shows how difficult it is to figure these things out.

This cuff that was sold on Esty through Indian Lodge Road at some point. OP mentioned her bracelet came from a pawn shop, so I don’t think it’s the exact same one. 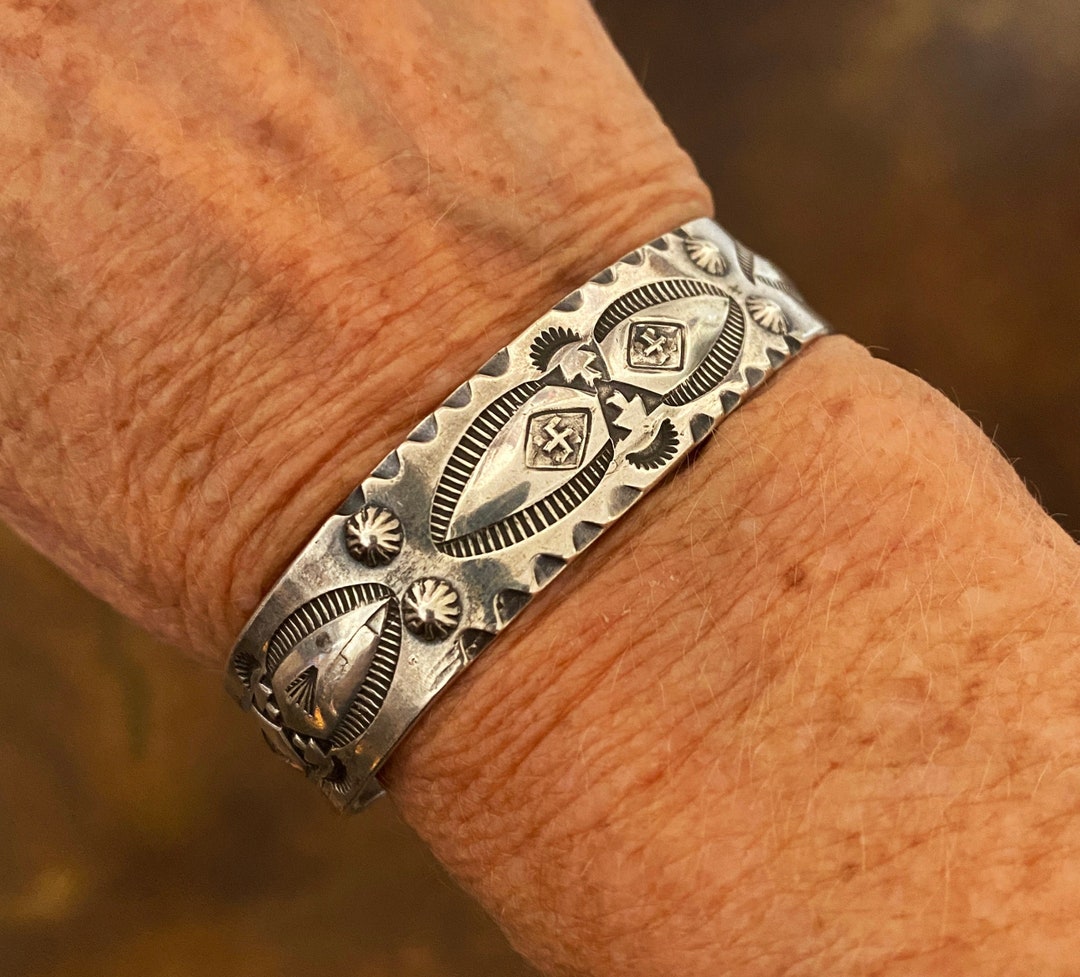 This Cuff Bracelets item by IndianLodgeRoad has 17 favorites from Etsy shoppers. Ships from Joshua Tree, CA. Listed on Dec 20, 2022

Indian Lodge Road has a similarly constructed/designed cuff on their website right now. 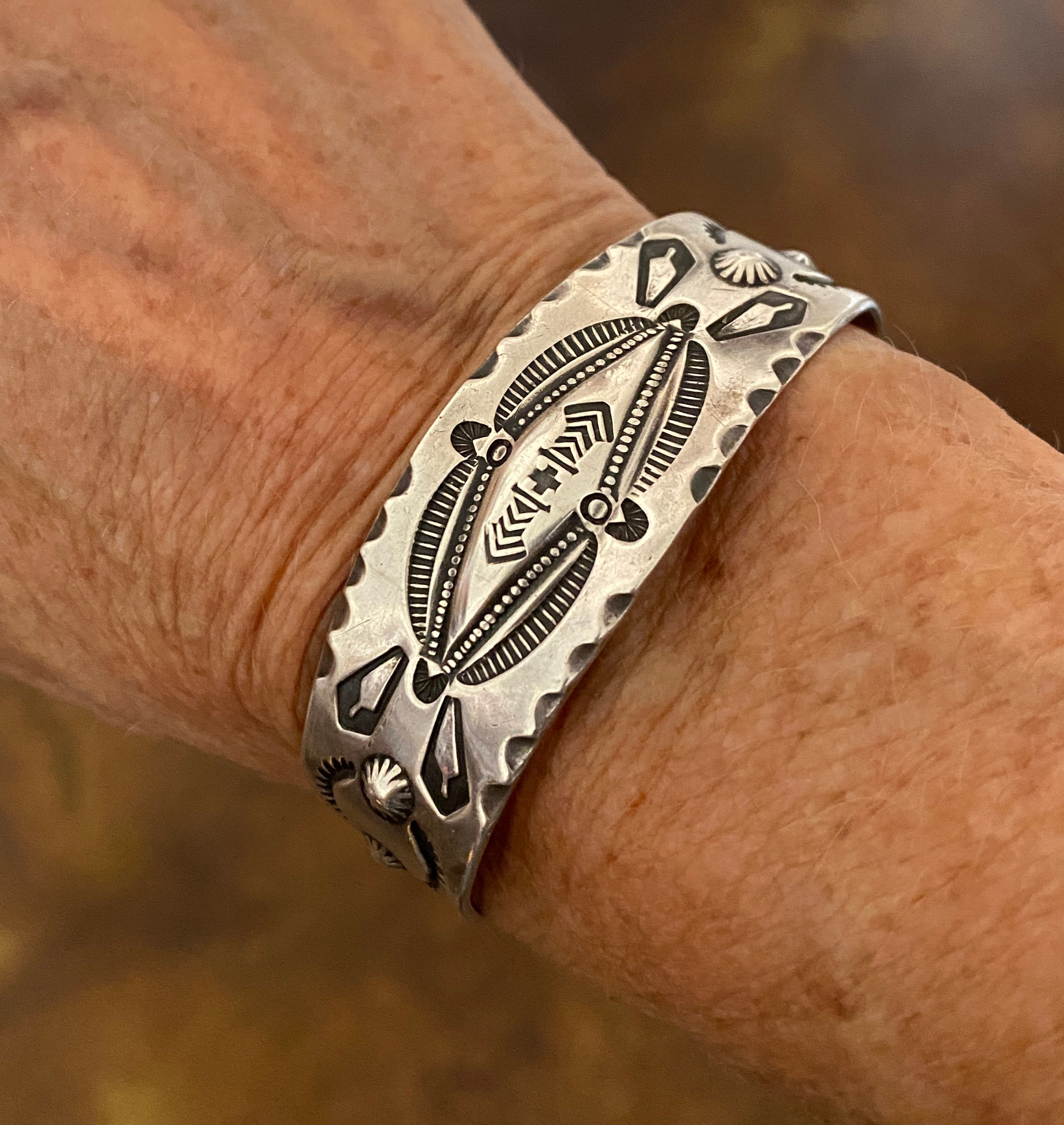