Here I have an overlay pendant roughly 2,2 inches diameter. I did some research on the hallmark and found one on the web which looks identical to me:

This belongs to “Hopi Enterprises” in Phoenix, a business which was started in 1961 by Wayne and Emory Sekaquaptewa who employed Hopi silversmiths to make overlay jewelry for sale. It closed down in 1983.

CAN ANYBODY CONFIRM MY FINDINGS OF THE HALLMARK and maybe identify the silversmith who made this piece? If the hallmark was not used after 1983 this would mean the pendant would at least be 34 years old?
Any information would be helpful. Thanks
Here are the pictures of the pendant I own: 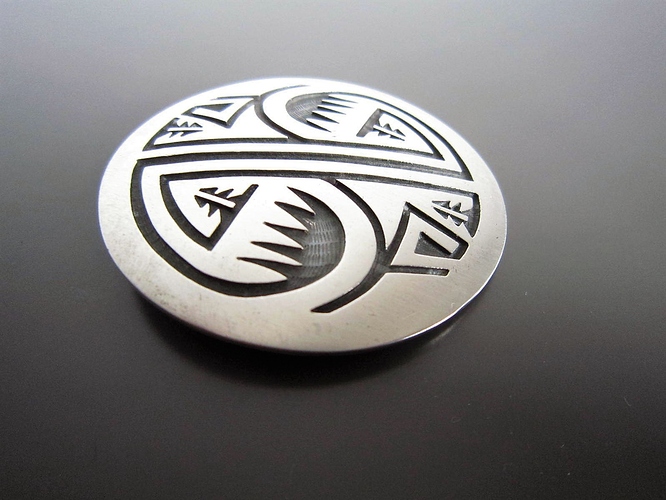 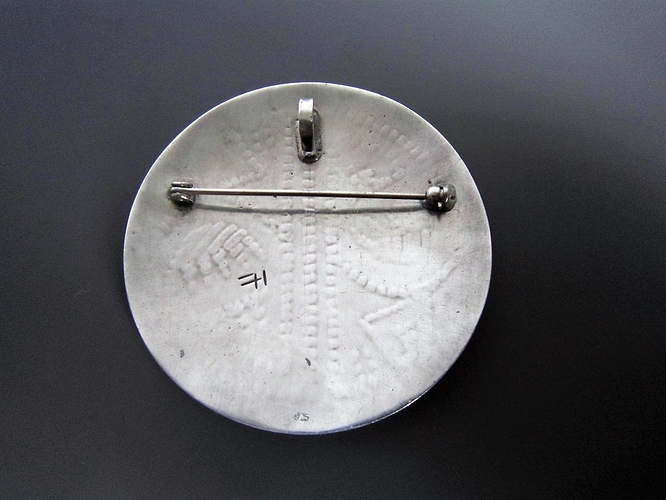 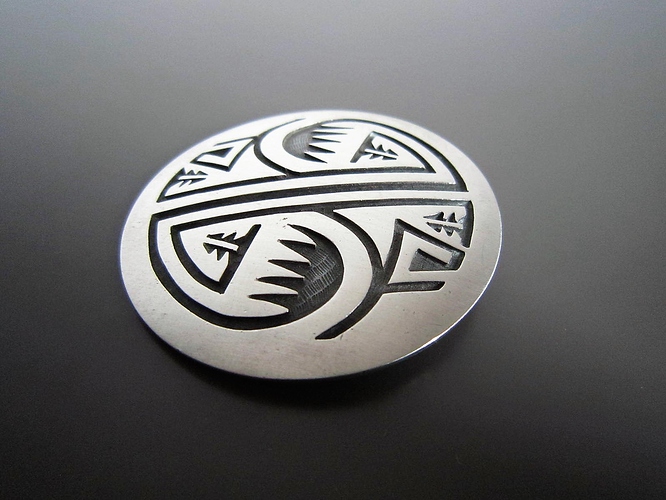 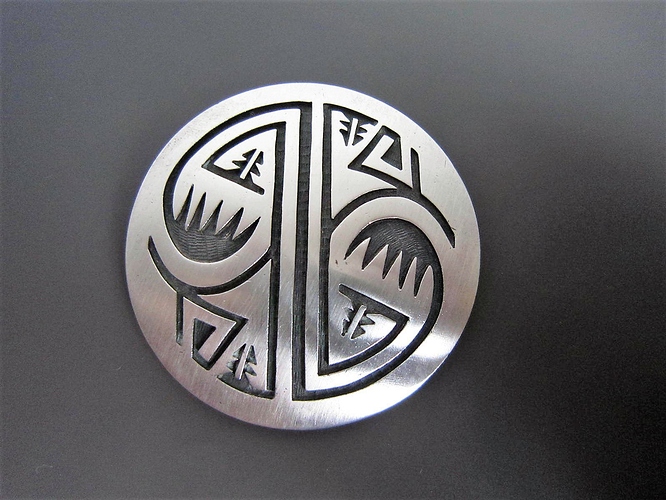 I think you are spot on with this one. I have an sterling overlay bun piece with the same mark. 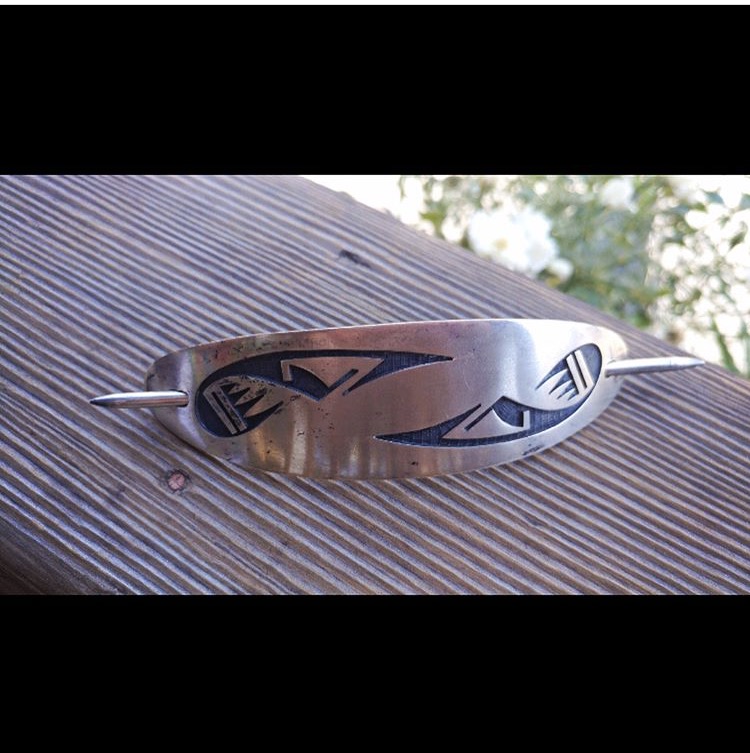 Interestingly enough, I have heard that pieces by Wayne Sekaquaptewa are more collectible/ more expensive than the items hallmarked with the HopiCrafts stamp.

I will look for an example hallmark, in the meantime, I’m not exactly sure of how large your pin is, but judging from the pictures I would be selling it for $85-$95. I feel that I have some quality Hopi pieces in my store, but they just do not generate as much interest as pieces with turquoise =\

My overlay pendant measures roughly 2,2 inches diameter. For me the elegance & timeless design of Hopi overlay really stands out. Hard to come by quality pieces nowadays. I will come to California / San Diego next summer. If you have a store I will stop by…

Please let me know! Can show you some excellent spots to look for native jewelry.

And personally, I really love quality silver overlay pieces. We occasionally see some sterling overlay that comes from Mexico, but it is not nearly as beautiful as Hopi work.

Totally agree!!! Most of them are rather crudely made and the symbols mostly refer to Kokopelli…

So here’s what I’ve found out about the hallmarks, which I think is very important:

From Wikipedia: "About 1961 Emory Sekaquaptewa (1928-2007) and his brother Wayne Sekaquaptewa (1923-1979) opened Hopi Enterprises in Phoenix, a business which employed Hopi silversmiths to make overlay jewelry for sale. Pieces made in the shop all bore a shop hallmark of a conjoined capitol “H” and lowercase “C”.

Emory Sekaquaptewa made silver jewelry that was hallmarked SEKAQUAPTEWA, his brother Wayne only occasionally made jewelry and shared the hallmark. . . Initially the Hopicrafts hallmark represented the hallmark for either brother. Once their trainees were sufficiently skilled, Wayne and Emory added their last name stamped to differentiate their efforts from other members of their team of jewelers" 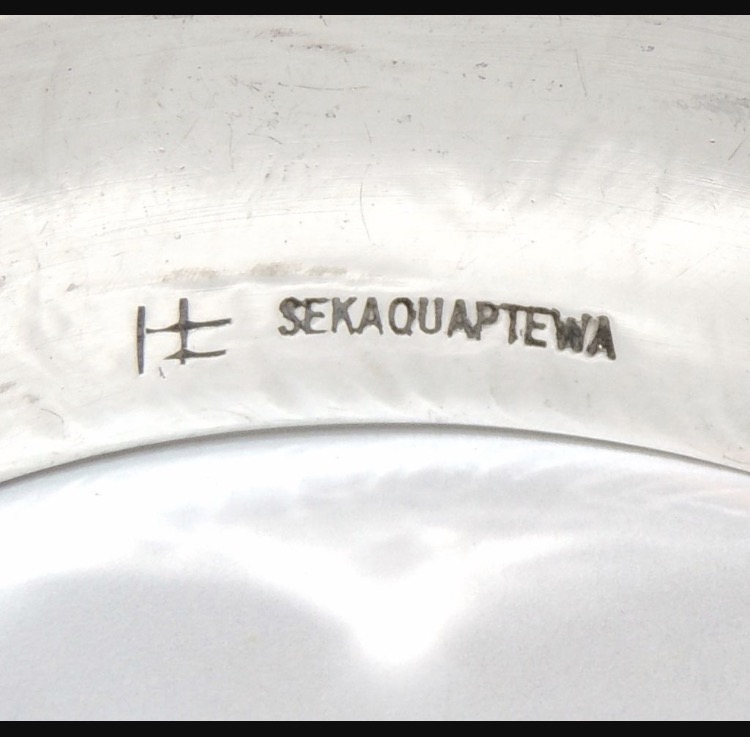 Now, I’ve noticed many people online who are attributing just the “Hc” hallmark to the brothers. I am not sure how they are telling the difference without the Sekaquaptewa stamp.

Additionally, Wayne had a son who’s hallmark looks like this: 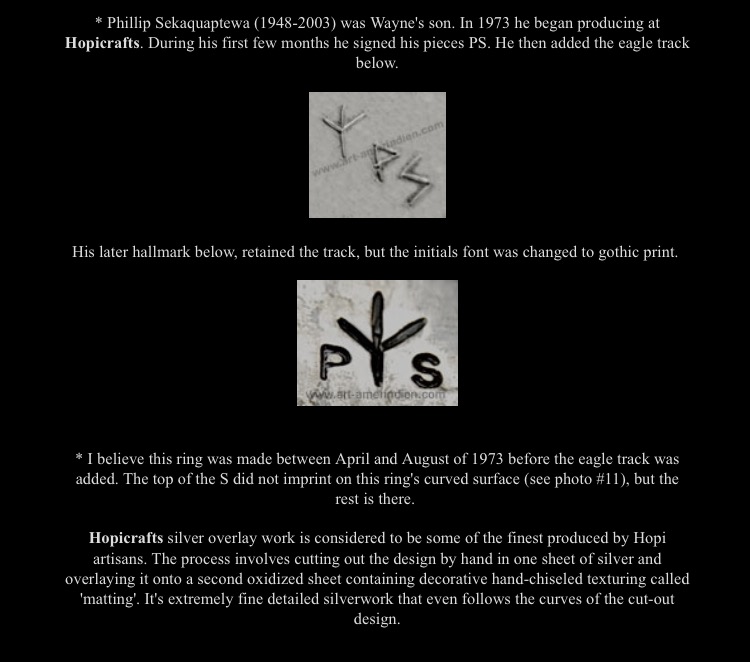 As always your response is on the spot!!! THANKS
Very interesting and I have the same question regarding the following: “Initially the Hopicrafts hallmark represented the hallmark for either brother. Once their trainees were sufficiently skilled, Wayne and Emory added their last name stamped to differentiate their efforts from other members of their team of jewelers”

The only way to get to know if this is a “Sekaquaptewa” piece it to get an answer to the follwin question:
When did the brothers start to use the surname “Sekaquaptewa” in addition to the “Hopicrafts” hallmark and did from this point onward all silversmiths working for “Hopicrafts” add their signature?

I think we will not be able to solve this…but I also say that a lot of pieces are sold as “Sekaquaptewa” also they are only stamped with the shops hallmark.

Hopi overlay is difficult. I can’t tell the difference between a piece made in the 50’s and a piece made in the 70’s, because the styles and techniques didn’t changed very much during that time. Maybe the sellers believe that the piece is older, and that’s why they attribute it directly to one of the brothers. My hair piece looks like it’s from the 80’s, so I wouldn’t even consider that one of the brothers made it.