Bought 2 pieces at a 3 Generations Estate sale a month ago.
The woman said he Grandfather was a hunter and often carved objects from antlers, etc…
The second piece is a mystery. The woman said they had taken it to UCONN for testing to see what it was made of. After a few months UCONN said they had no idea what it is and returned it.
To me it looks like a Buffalo Head was created. It appears that it may have been worn on a scarf or tie. It seems to small for a ring. Does anyone have any idea on what this is? Using a macro camera setting it appear the inside has burlap stitched and then the string is wrapped around the antlers. Perhaps the front has burlap as well, to connect the beads to, brown for the fur and 2 black beads for the eyes. 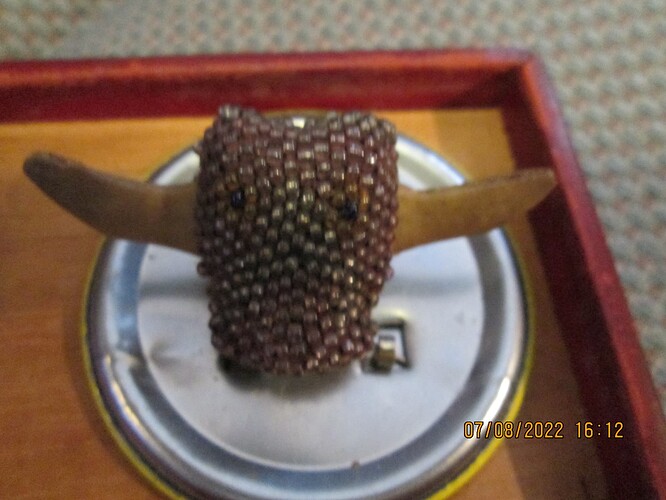 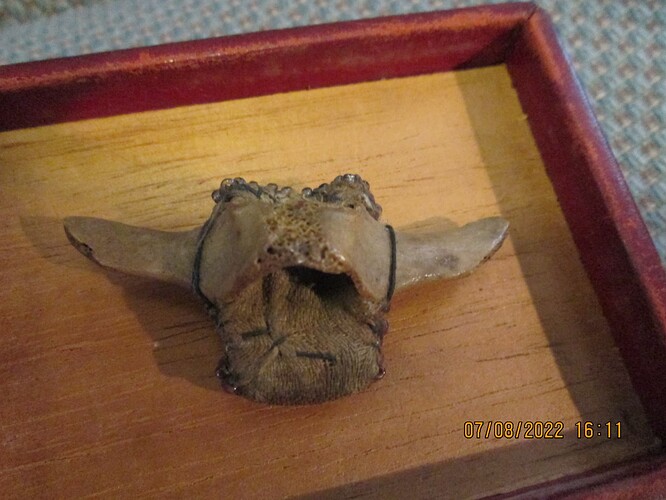 There are Huichol beaded tourist souvenirs with seed beads forming the face on a steer head with horns (the horns left undecorated). I’ve seen things like this advertised as “Navajo folk art,” too (?). The base can be made of resin, molded beeswax, or bone. I’m surprised that whoever analyzed it didn’t even reveal what it’s made of–can you tell?

How small is it? If very, maybe it was a keychain fob.

Size 1.25" top to bottom, 2.5" wide from tip to tip of 'horns"
No, I can’t tell. My husband things it looks like it is made from bone (vertebrae). I am surprised too that UCONN couldn’t identify it. At least that is what the sellers told me.
This was an education, First time I heard of Huichol beaded tourist souvenirs. Thanks.

Thanks I learned 2 new things today. I will remember going forward the distinction about horns and antlers. My husband said it was a vertebrae, so he will be happy to know you concur.

Definitely looks like a vertebrae. Wee bit creepy to me 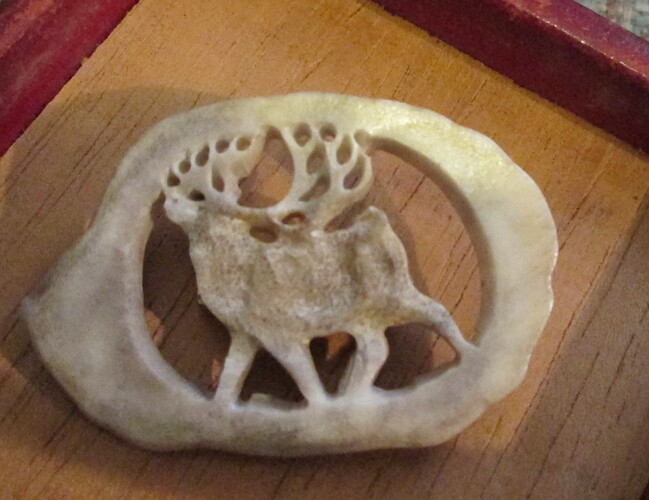 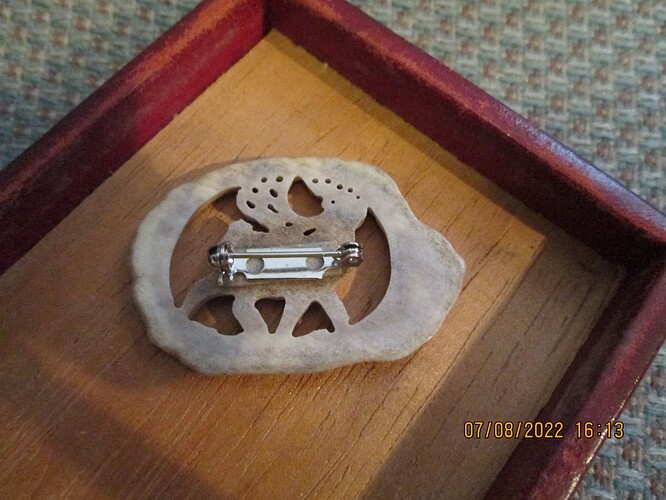 So an interesting side note re: horn vs antler is the pronghorn. They have neither a true horn nor a true antler. Antlers shed every year and are made of bone. Horns don’t shed and are made of compressed keratin. Bizarrely the pronghorn’s “horn” is keratin AND sheds every year. They are one of my favorite animals which are truly unique to the American west.

This was very interesting info. I am relating the piece to the animals in New England, where I live. The antlered animals here would be deer and moose. I had to look up Pronghorn to see what it looked like.
I have never seen one. Amazing creature.
I bought the pin locally at a yard sale, sometimes called Tag sale garage sale, estate sale, depending on where you live. I assumed the grandfather hunted locally, but people do move around in their lifetime.
Antler would be my best guess too. Thank you all for the input. I’m kind of glad this one was not a vertebra.

Another fun fact: Pronghorns are North American’s fastest land animal able to run at speeds up to 60 miles an hour.

Googled Pronghorn, never heard of them. I came across this picture of a baby Pronghorn, fell in love 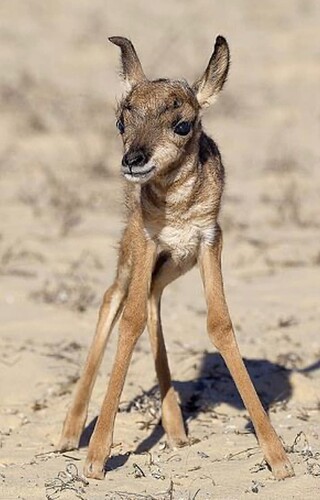 They’re really pretty animals. And yes fast. Next fastest after cheetahs, but they can also run long distances at a high speed which cheetahs cannot. I read they can run at speeds of 30 mph for 20 miles.

We saw oodles of them a couple years ago in WY, but have seen them in many western states.

I almost bought a pawn Hopi pendant with a pronghorn head on it, but picked another instead. I love the one I have, but wish I had forked out the $ for both. 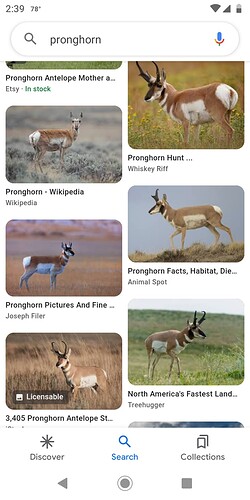 Another tidbit about them I learned not to long ago; early settlers mentioned that they were more numerous than the buffalo, millions of them. Oh, and even though we call them antelope…they aren’t!

Sorry @hisweetpotato, didn’t mean to take this off so far down a rabbit hole! Your antler pin is pretty cool!

No apology needed. Very informative feedback you’ve given me.
I blundered again. At another church tag sale Friday, in another town, I bought an owl pendant which I thought was whittled out of a single piece of wood. Maybe by a Boy Scout? The slit in the eyes, rather than round circles, seem modern to me. .
. It was in a sealed sandwich bag. I appreciate wood carvings of all skills, since I do not have this skill.
Handling the pendant I noted the hardness, the thickness of the shank, the small spots on the back that leads me to believe I once again found a bone carving. 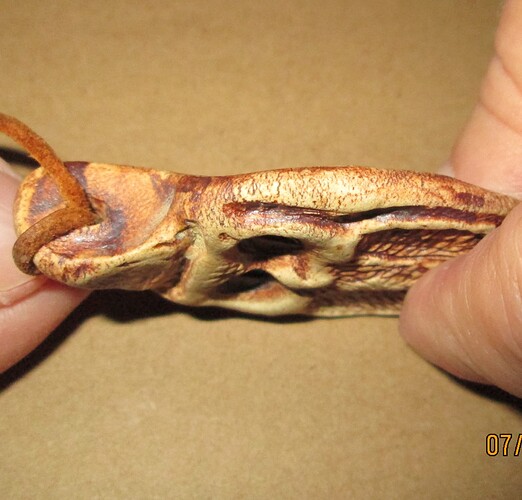 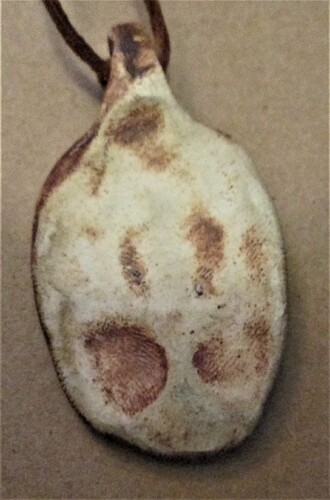 I believe that’s pottery. Thumbprints on the back.

I am happy with that!