I’m Kay in Michigan. I like NA jewelry as a kid. About 10 years ago,I was on a trip to Nevada and fell in love with an inlaid bear pendant the store told me was by Calvin Begay. I wore it a lot and it was pretty much my signature piece.

I was devastated when I lost it years later, so I joined here looking for a replacement. To make a long story short, I bought several other inlaid bears, learned more about NA jewelry and became more passionate about it. I visited friends in Santa Fe and learned even more in the shops and museums. I picked up more pieces along the way.

Now, I have decided that Hopi silver overlay is my thing and I think I’ll try selling some of my other pieces.

Here are my Hopi pieces: 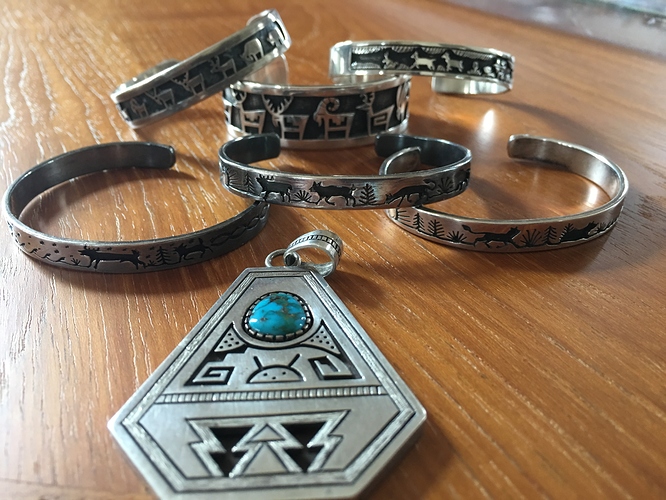 The front pendant is by Roy Talaheftewa, the next row are three Vidal aragon bracelets (I’d sell two) and the back row are two Bueford Dawahoya bracelets and a Robert Becenti storyteller. I wouldn’t part with the one inch Dawahoya.

Here are my bears. The original one (middle, top row) turned up years after I lost it. It wasn’t a Calvin Begay after all, but a BG Mudd. 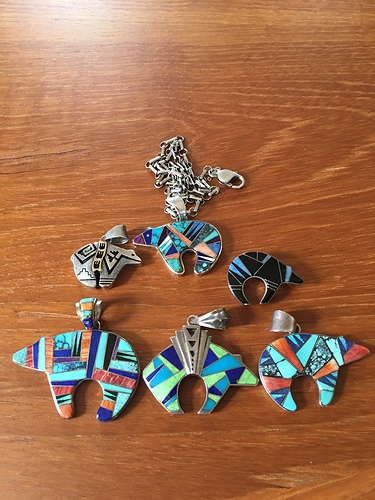 Here are the things I’d be interested in selling. The clip earrings are Bell Trading, the bracelet is Sarah Chee (I think), the silver beads are hallmarked RT, the fetish necklace is from the 1960s.

I Forgot to upload the picture if things to sell:

Nice collection! Selling these would all depend on what platform you use, price you want and how diligent you will be about holding out for the price. eBay is generally full of buyers looking for the lowest price. I would suggest that you have a look at Etsy. I have found that they are the most reasonable with their costs to sell. It is a very simple and intuitive platform to use. The biggest thing they have going for them is that their community is 33 million or so. That is a great audience!! While you will get low ball offers, I have found that most folks using it are buying for themselves or as gifts. Good luck selling!

Thank you for responding Christibo! Good advice about Etsy, I’ll look into it. I always enjoy your comments on this website.

I have two other questions for anyone:

Thanks for any help!

I think you should wear your Zuni Bears with pride wherever you are! When I go to New Mexico I sport all my best stuff! A little info below:
The main source for academic information on Zuni fetishes is the Second Annual Report of the Bureau of Ethnology submitted in 1881 by Frank Hamilton Cushing and posthumously published as Zuni Fetishes in 1966, with several later reprints. Cushing reports that the Zuni divided the world into six regions or directions: north, west, south, east, above, and below. At the center of each region is a great mountain peak that is a very sacred place. Yellow mountain to the north, blue mountain to the west, red mountain to the south, white mountain to the east, the multi-colored mountain above, and the black mountain below.[1]

Each direction is represented by a Prey God, or guardian animal, and are listed by Cushing as follows:

north — the yellow mountain lion,
west — the black bear (represented by the color blue),
south — the red badger,
east — the white wolf,
above or the sky — the multi-colored eagle,
below or underground — the black mole.
Each prey god is the “guardian and master” of their region, with the yellow mountain lion being the elder brother of all animals and the master and guardian of all regions. Each one of these regions contains an order of all the guardian animals, but the “guardian and master” of a particular region is the elder brother to all animals of that region. These guardians are considered as having protective and healing powers. They are held by the priests of the medicine orders as if “in captivity” and act as mediators between the priests and the animals they represent.[2]

A second group of fetishes, the Prey Gods of the Hunt, belonging to the Hunter Order, or Society, are given in the “prayer songs of the Sa-ni-a-kia-kwe”. These guardian animals are the same as the original regions with the exception of the coyote, which replaces the bear; and the wildcat (or bobcat), which replaces the red badger (Cushing, 1994:20). Sa-ni-a-kia is the awakening of the fetish and subsequently the power of the hunter (Cushing, 1994:15).

The necklace is lovely, Can you provide individual photos of it? Front, Back, close shots of any hallmarks. Close shots of the Turquoise, chain and clasp? Also a weight would be helpful. I can’t promise anything but with those kinds of details you have a better chance of grabbing the attention of one of the Pros!

Christibo - thanks! As always, your post was interesting and insightful.

The turquoise necklace weighs 98 grams. Here are the other photos of it. Sorry! Some are not the greatest photos. 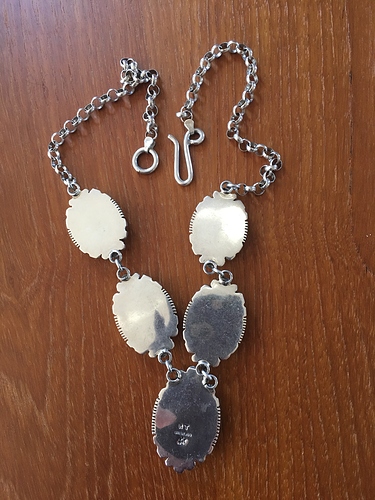 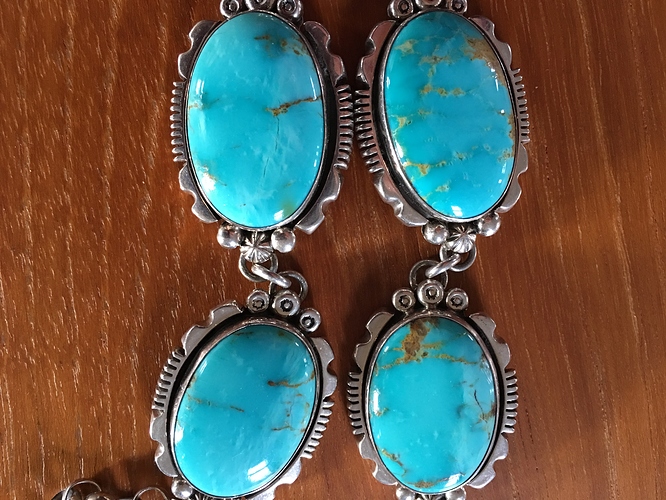 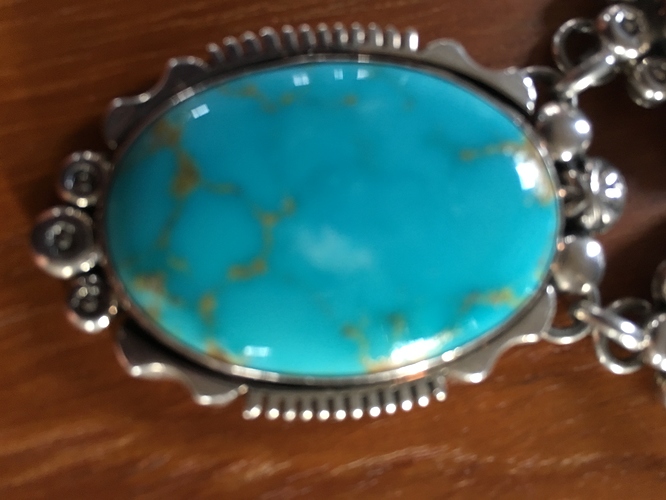