This piece is only stamped 925. 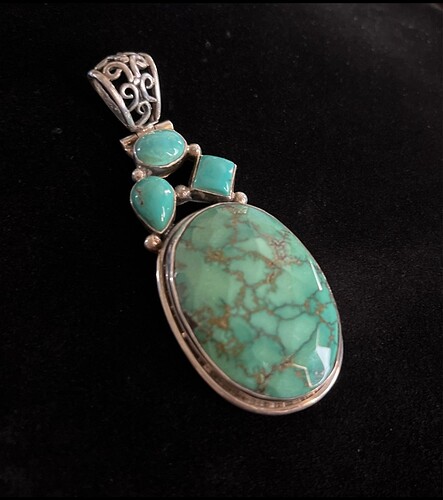 This piece is reminds me of jewelry made in Thailand. It doesn’t have that one of a kind feel to it (that is just my humble opinion). The fact that it is only marked 925, and has no makers mark would make me skeptical. It is very pretty. I am certainly not an expert so I won’t even guess at the turquoise.

Stone is very nice, high quality Turquoise and looks natural, but appears to be fractured along a lower matrix line. It’s large enough to be recut, and worth recutting. The stone is where the value is in this piece. It definitely looks like Asian manufacture. Cast bail, and partially fabricated setting. .925 is an international standard for Sterling, and is less frequently used in Native American Jewelry, but a .925 stamp does NOT necessarily mean foreign manufacture ( I keep seeing this repeated on the forum, ad nauseum, as generally accepted conventional wisdom, and it’s simply not true). .925 stamps have been sold at various US “Indian” jewelry supply houses since at least the 70s. And prior to the late 90s or so when Asian look alike jewelry overtook domestic Native jewelry as the dominant market force, a great deal of genuine native made jewelry was made for and sold to the European market for which a .925 stamp was required.

Aside from my company which for many years supplied Zuni and Navajo jewelry to Germany, there were many other companies both domestic and European which exported enormous amounts of Native American made jewelry to Western Europe.

The market was enormous, really enormous, and business was good!!!

Turquoise does not look typically Chinese, or Tibetan. To me at least it looks more Persian. High quality SW Asian.

Interesting about the .925. I wasn’t really aware of how important export was during the boom (and was this the main purpose of the stamp being available in US supply stores?). In years of collecting I don’t have a single Navajo, Zuni, or Hopi piece with .925, and don’t think I ever have. This may be true for other collectors, I don’t know, but it statistically must be far less common, underpinning the long-stated thought of it being not a NA jewelry thing.

I wonder what level of the trade bore .925–as in, did costly pieces also wind up marked that way?

Not familiar with your personal collection or buying choices, so I guess it depends on what one has personally chosen to buy, or not to buy. If I personally avoided or never bought anything with a particular mark or stamp in it, that’s certainly not anything I’d expect to find in my own collection for sure.

I tend to agree that statistically a .925 stamp is less common, but in terms of authenticity it’s also not immediately disqualifying.

I’ve never bought in a way to avoid or to acquire a particular hallmark and silver stamping, just selectively to get the best artist, style, and quality in NA work available at the time it meets me. And that has never had .925, is all. So I wonder what the scope is of pieces that might be marked that way. Maybe it’s hard to say.

One of the really valuable aspects of this forum is the opportunity to pick up some points of discernment here and there.

I’ve just offered some insight based on a half century of personal knowledge and experience, and honestly that’s all I can offer.

I was there, the whole time. For every moment. Still am.

“So I wonder what the scope is of pieces that might be marked that way. Maybe it’s hard to say.”

Domestically, it would have been (and still is) a very small percentage since Americans prefer the “Sterling” stamp over all. Overseas, I think it depends on who was ordering, in what country it was being sold, and how the customer wanted it marked. Much of the jewelry we exported to Germany, was imported there under a “Costume Jewelry” customs code to avoid the exorbitant duties, and marking requirements for fine jewelry. In France, you couldn’t get away with that. Although a lot of the Authentic NA jewelry sold in France at the time was actually smuggled in, if it went through official channels and was sold as Sterling Silver it had to be marked .925 , and also received a special stamp from French Customs. As I recall Switzerland had similar requirements.

Jewelry we specifically produced for corporate jewelry clients in Germany in the 80s was marked .925, and some of that Jewelry also found its way to domestic clients. I suspect this was true for other US producers as well. From 1990 on, Jewelry from the M. M. Rogers studio (100% US made) was almost always marked .925 for both domestic and foreign clients.

Interestingly a “Sterling” stamp doesn’t necessarily mean that the item was made domestically either. I can think of one shop in the Philippines that not only copied high end Zuni jewelry, but actually sourced their silver and stamps from Indian Jewelers Supply, marked it “Sterling” to look like it was US made, and for a while was actually marking the jewelry “Zuni”. We raised hell about that with US Customs, but with very limited success.

Thank you so much for your valuable insight and your years of collective knowledge and expertise. She offered me the piece for $50 and im going to buy it. I will post some better pics as soon as i get it. Its a stunning piece to me with such unusual and beautiful color. Yup im excited!

Yes very pretty, and she offered it to me for $50 so im going to take it.Thanks as always

I think you got a deal! Pretty mix of colors and turquoise types. I think this looks Aisan made due to the bail and the open back (I saw your other post) but that sure doesn’t mean it is any less valuable or pretty.

To the discussion of .925 vs sterling stamps, I have seen far more sterling stamps on NA jewelry but I know .925 is out there, too. More of my own collection is old and secondhand and the older pieces do seem to be more often sterling stamps (of those that are even marked). However, Aisan imports and fakes also employ sterling stamps and hallmarks we associate with NA artists quite frequently so you can’t read too much into one or the other in any case.

Yeah i was kinda leaning toward Hubei Province for the Turquoise. I happen to love Chinese Turquoise. I have been researching but haven’t quite found anything like this yet, so the search continues. Lol. Thanks

It is a pretty stone. @mmrogers thought it looks Persian, and he is very knowledgeable. But remember, no one is saying 100%, just offering opinions.

Persian! Wow, that Turquoise was on my list of must haves. I didnt see where @mmrogers made that observation so maybe he said it privately. One person said Carico Lake, to be honest either one of these mines would be a great privilege to own.
Thank you. Also I am posting a liquid Silver Necklace and some beads

It’s in his first post in this thread. Last paragraph. He was answering your questions.

Ok thank you so much. That guy is a Braniac for sure!