Is this cuff by Roger Skeet, Jr

This looks like Navajo work to me. I’ve been reviewing work by artists who signed “RS” according to Hougart’s. One good candidate is Roger Skeet, Jr. Is anyone familiar with his work? I keep running across beautiful concho belts with traditional stampwork, rather than work that looks like this.

There is no Sterling stamp but this tests as Sterling. As you can see, “RS” appears on a plate.

No idea what this turquoise might be and am open to educated guesses.

I see that in late 2015, someone asked about a ring with an “RS” signature. What interests me about that older post is that the ring has similar rainbeads/rosettes.
http://forum.turquoisepeople.com/t/is-this-a-roger-skeet-ring/615

Any ideas on this one?

Stone at 10 o’ clock has a hairline. Central stone moves a little in its setting. Other than that, this is in great shape. It’s substantial at 62.1 grams and the flanks are nicely curved. I’m thinking it may be Revivalist work rather than vintage. 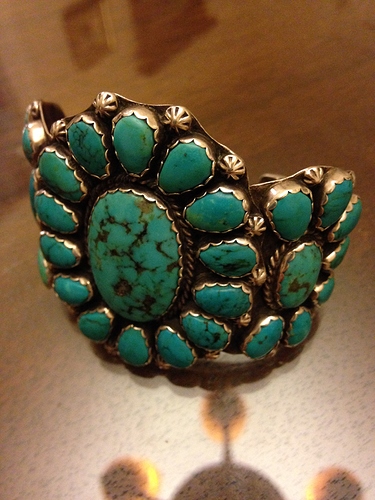 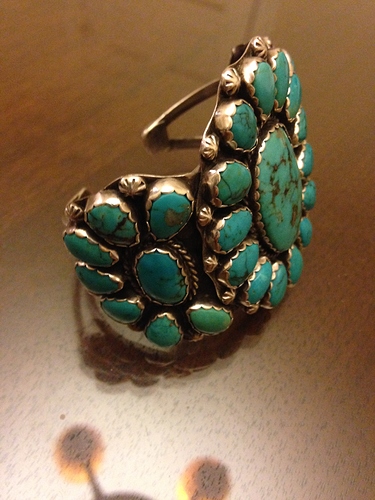 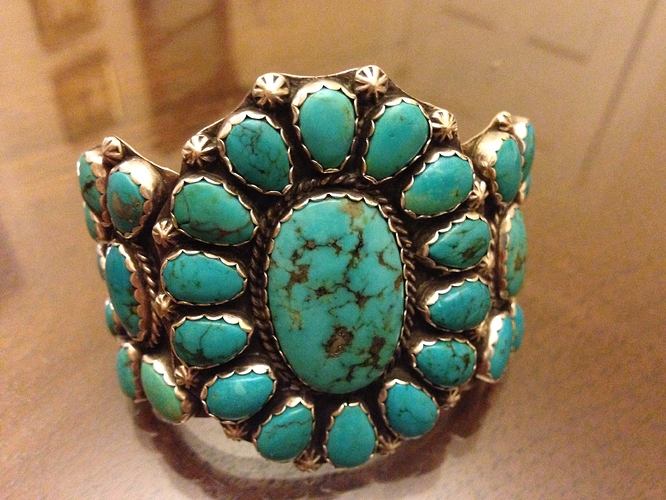 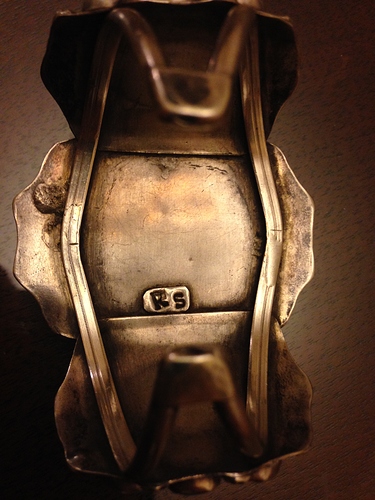 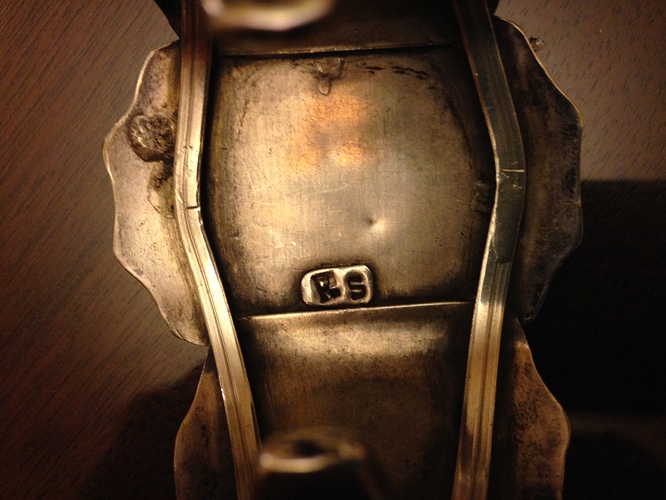 I think the key here is that the RS is on a plaque. Nothing that I have found claiming to be Roger Skeet looks like that and all are stamped directly onto the work.
It is a nice cuff. Whoever made it did a nice job. Wish I knew more about turquoise identification.
I’ll try and check some books tomorrow and see if I have anything that lists an “RS” on a plaque. Checked Barton Wright Hallmarks this evening and found 8 “RS”s. His hallmark for Skeet was RS inside an arrowhead. Two that caught my eye were Raymond Secatero and Raymond Yazzie. None were shown on a plaque but Yazzie’s were slightly offset.
I was reading about the fake NA jewelry this week and it making me think about a pendant that a friend brought back from a jewelry trade show several years ago. It was a big, heavy “turquoise” pendant hallmarked Secatero. After several years all the color has started fading away from the sides. What is showing underneath is very dull looking rock. I will dig it out and make another post. I mentioned it here because one of the names I gave you was Secatero 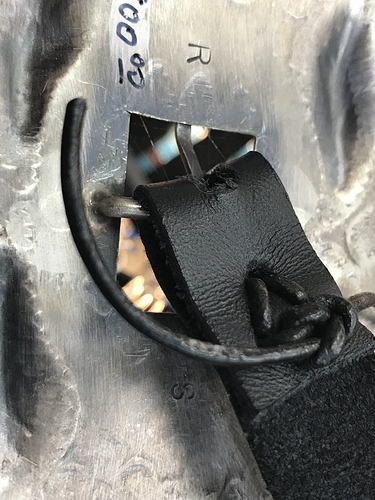 I put up an image of Roger Skeet Jr’s hallmark, it is different. However, if an artist forgets to hallmark the bottom plate adding this stamped cutout is an easy way to fix that. I have seen this done many times. Roger makes so many belts that you don’t really get a feel of what his bracelet style would look like. Your cuff is very nice and it does seem to have some age. Also, the turquoise has a nice cut and color. I would say it is Kingman Turquoise, Navajo handmade and from the 1980s.

Thanks, Jason & Islandmomma. Based on everyone’s research & comments, I think Roger Skeets is just a remote possibility now, because this is atypical of his work, which concentrates on silver and stamping, rather than setting big stones. There must be someone else out there who made this. The person probably wasn’t a beginner so there must be other comparable work somewhere, I just haven’t seen it yet. “Secatero” is a good place to start and the 1980s as a possible date helps. I’ll keep searching.