Is this Edith Tsabetsaye's Work?

If Edith Tsabetsaye did not make this brooch, I will still love it. Even though I don’t wear brooches very often, I will find a way. The needlepoint is the size of individual grains of white rice. I can’t believe the infinitesimally tiny teeth that hold each stone in place. Also, the design itself is extraordinary. It’s reminiscent of the whirling log design, but it’s more intricate, like some living creature — like pine boughs tied together, or some kind of extraordinary starfish.

That said, if she made this, I’ll be happy. The thing is, it isn’t signed. Was there a time when she did not sign her work? Did others in her family do work like this, or did others try to reproduce her work after marveling over it?

This made me curious about the artists doing work this fine. Do they wear a jeweler’s glass in their eye or do they set up a magnifying glass on a stand over their work space? I would not have the eyesight, the manual dexterity or the patience.

It looks similar to her work, but she uses a high dome cut to her stones. These are a much lower cut stone. It is still beautiful and I would not be disappointed if it were not her work. Very nice.

By “dome” cut, I think – but I’m not sure – you mean that the “needles” are high at the summit and taper down at the ends. Sort of like a “D” turned on its side. I believe I have seen that cut before in stuff that I own by Norbert & Florinda Haskie, without knowing what it was.

You’re right, the stones in this brooch curve a little but they aren’t raised to that degree.

Someone must have liked her design but did not have her technique of cutting stones.

Thanks so much for taking the time to look and reply.

This is an Edith Tsabetsaye piece to compare the image with. 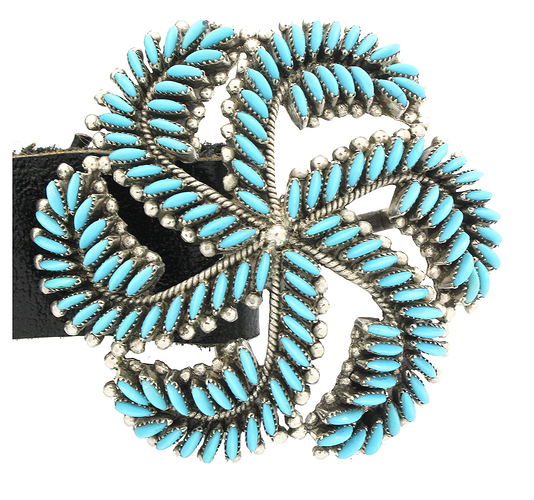 Jason, thanks so much.

I feel like I can’t conclude it’s by her.

The scale is different. My brooch is smaller – that I can tell even without measurements, by counting the stones on each “arm.” Also, the central bead in your example is larger than the central bead in mine. By itself, the difference in size doesn’t mean anything. (Sometime I’m going to photograph a lineup of my G.B. Natachu rainbow man pieces and show the range of sizes they seem to have been made in over many years.) But maybe it does here.

Also the stones in this brooch are not domed. I know what that looks and feels like from running my finger over some pieces that I own by Norbert & Florinda Haskie and looking at them closely.

I don’t know if the absence of a signature means anything.

I will just have to enjoy it exactly for what it is.

Even though, like most people who post here, I like knowing who did the work. There’s a personal connection that way. Even after I learn the names of some of the artists who signed the jewelry that I own, I wonder about the people behind them. That is part of the mystique of buying something hand-made instead of factory-made. It’s so much more personal.

But I do know this was hand-made, it’s obvious, and that means something, even if I don’t know the maker’s name.

Saef, I don’t wear pins often either. One day by accident I found a NA pin that had a neat little contraption on it. It’s a barrel that you slide onto the pin, then latch the pin. The other end has a pendant hook and voila you now have a pendant. Love it. I really should try to track down another so I don’t have to move it around so often.
You found a pretty pin. I hope you enjoy it.