Is this old or just poorly made?

I recently got this silver and turquoise Thunderbird pendant. I was wondering whether it was old. Thanks. 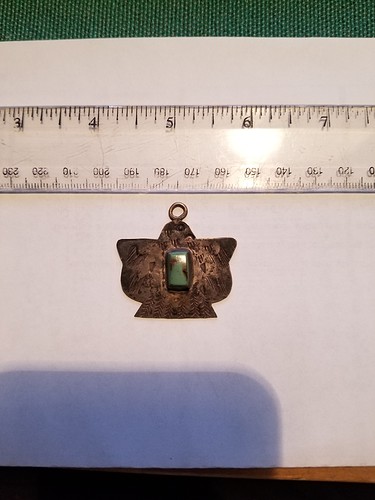 Hello, Could you add pics taken closer up (zooming in), front and back, and do it without flash? Between the light bounce and the distance, these are very hard to interpret.

[A side comment about Native American jewelry: “Old” is not synonymous with poorly made. Often, the best things were made long, long ago.]

I apologize. I did not mean to imply that old is poorly made. What I meant was that older pieces can be more worn , the details are not as crisp, etc. . This can also be true of a piece that is poorly made. 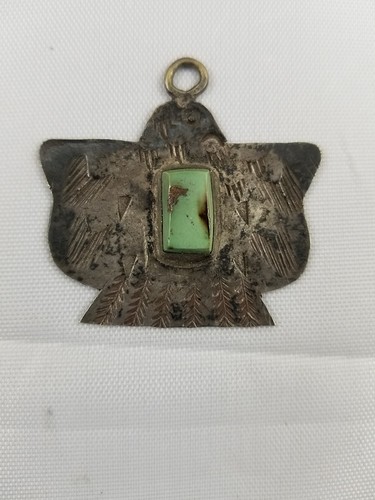 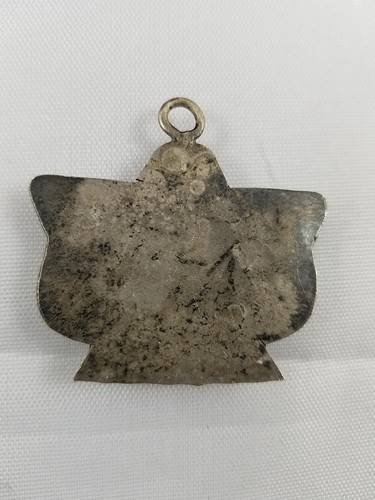 Looks old to me. How are the edges? Are they smooth or are they sharp? Sharp edges would tell me that it may be a reproduction made to look old. Looks like it could be a Harvey Era peice or made to look like one from that era. Nice!

Unfortunately I would have to say that the edges are sharp.

Christibo, what do you think of the square shape of the cab face? Not sure I’ve seen that done in the older stuff.

Its newer. It’s made to look old. I have a similar one. People have been producing southwestern jewelry in place of native American since the 70s when the popularity sky rocketed. A $10 ring shot up to $30 seemingly overnight. People would camp out by the trading post/ pawn shop waiting for the owners to kill pawn. This was the hey day of pawn turquoise. Guys like Don Lucas began producing items very similar but slightly different. For the most part nobody knew the difference. not every piece of signed "Native American " jewelry was native American. it was a few sly cats finding loop holes calling it "pawn " or “southwestern” . And alot of it was very high quality jewelry. Not all was a get rich quick trick. only difference was it was being made by some slick anglos. it has gotten so mixed up its virtually impossible to tell one from the other. and really unless you are collecting for cultural historical reasons, in which case you need a museum and not a jewelry box. then who cares. Long as the quality is there. I mean you can pick up a $50 Navajo ring on ebay. Or a $500+ ring from John Hartman. Don’t sweat it too much and just enjoy it. It’s a nice piece 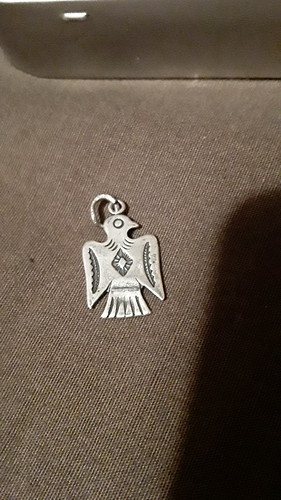 and really unless you are collecting for cultural historical reasons, in which case you need a museum and not a jewelry box. then who cares.

I don’t collect for cultural historical reasons, but I do collect for authenticity, so I guess I would care. But then again, I’m overly picky about my pancakes being too dark.

The age is hard to determine but it’s hand stamped without a doubt. When metal is “stamped”, there is an equal and opposite reaction. If you look at the bottom feathers, the metal is slightly distorted. That also appears to be true from the other stamping on the front. Also if I was going to cast that pieced, I would cast the “O” jump ring in place while here the “O” ring is obviously soldered… Nice piece!

It is actually more common to see that in older pieces or in the first few pieces of an inexperienced silversmith. Hand shaped and polished stones are something that I always look for as one of the indicators of age in a piece, tempered of course with the possibility that it may be someone that has just started or only made a few pieces before giving it up.

Yes I can understand that. I do the same. But if that’s not what you are specifically after and don’t pay the price for authentic. Then just wear it and have fun. I guess that’s the point I was trying to make. I have a couple inexpensive pieces I just enjoy wearing