I am hoping to learn more about my jar from anyone who may have some insight to share. Having made the recent purchase decision based on form and the unusual decorative band consisting of incised triangles and rectangles painted in yellow, orange black and pale pink colors. The signs of wear, having some age to it and classic jar form lead me to believe it was made for use, rather a decorative piece for the shelf.
Your comments are welcome
Thank you
Kind regards
Kevin 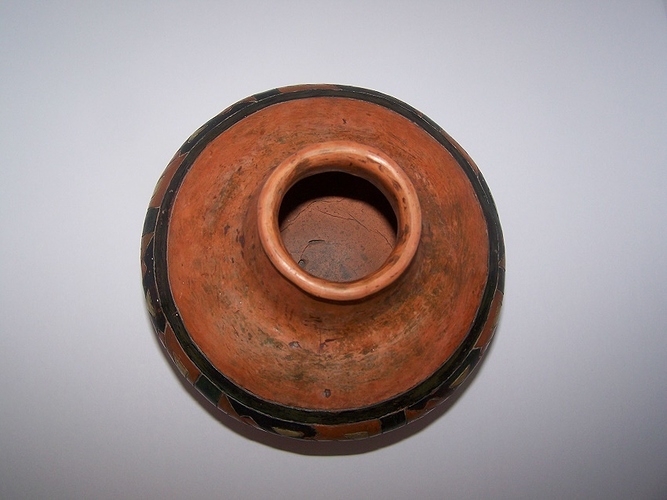 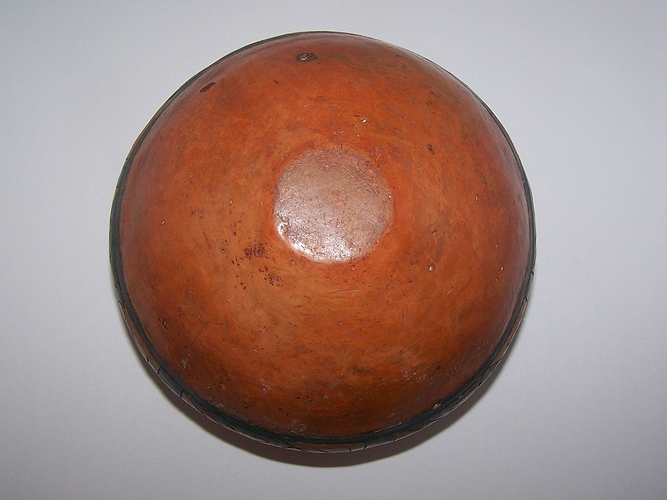 Wonderful top and bottom! Can you please show pics of the band too? Close-up and detailed so we can see the colors and handiwork please
~Thanks

Hi,
Thank you for your comments, i hope these photos help show the colors and texture of the paint . there are traces of a deep red color found all around and inside the jar

The band consists of 4 triangles spaced apart by dark colored vertical stripes, with smaller orange ground colored stripes separating the triangles within each small grouping. The number 4 gives completeness representing the four directions. There are 6 groupings of triangles in all around the circumference- and i have to wonder by the nature of the geometric pattern, w/.the central shape of the triangle, if the 6 groupings might represent the 6 distinct warrior societies of the Cheyenne Nation
I found an interesting paper online which may have some relevance here. Given in the link below, the paper is titled “Geometry of Native American Art” by Robert Parr, dated April 25, 2002., of the Texas A & M Mathematics Dept

Although rendered in a distinctly different manner, and from different eras below is a link to a modern Cheyenne art piece with a triangular band around the circumference of the pot.

(Please copy and paste each link into your browser to go to the page, thank you)

the full view photo did not upload on the 1st attempt, so i will try again, thank you 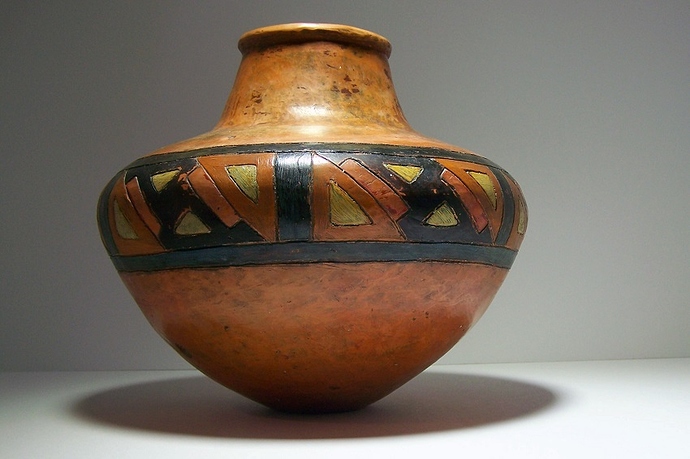 Many of us are already aware of the problem of a lack of documentation of Cheyenne pottery. And, as a nomadic tribe, pottery was not very useful due to the fragile nature of it . When the tribe moved to a new location, the pottery could simply break so it is rarely found today. And only as a matter of conjecture, most of any of the pottery would have been made for a special use

The pottery of the Great Plains tribes was typically made from a lump of clay, rather than the coil method as had been used by other tribes. One can see that the interior was “scooped” out from the “lump” in the Great Plains manner, with a possibly of some influence in the shape as learned from Mexican neighbors of the Cheyenne to the south

The complex geometric motif implementing the number 4 in the pattern with fine blackish lines is commonly found in the decorative arts of the Great Plains tribes, mostly Cheyenne

The value of the jar comes by a literal interpretation on all of the symbolism employed in the design arrangement- The military theme would be of a military nation origin, one that was concerned with maintaining balance with power in unity of its segments of people used to protect a life of harmony within its borders, a great Native American spiritual goal of the military unit

Symbolism:
The choice of geometric shapes, triangles and stripes and colors, in the repeating pattern, six sets in all shows a great deal of symbolism for interpretation in the context of a warring theme of a great Native American nation organized as a military unit with the central theme of maintaining balance and harmony for its people

The ceremonial jar was painted in both war paint colors, and in a color that was used to convey a message of harmony

The war paints yellow, orange and deep red with only traces of red remaining on the smaller stripes show ones willingness to fight fiercely till death in battle. Black is symbolic of strength and power but it can also mean victory as face paint rather than war paint
A Native American belief held that the wearer of triangles and stripes when drawn in war paints would have supernatural powers bestowed upon them in battle.

The greenish tone color of the neatly laid out borders to the north, south and between each set conveys a message of harmony with the power to maintain it as signified by the black tones

The 4 larger and smaller triangles, point in all directions. The number 4 also denotes completeness in all of the directions

The repeating pattern of sets forms a well drawn circle, each set represents 1 of the warrior societies of the Cheyenne Nation, such as the Dog Soldiers, and all segments were made exactly the same to show none were above or to be treated differently from the others. The six societies together complete the circle signifying unity among them in the struggle to maintain balance and harmony