I bought this pretty piece because of the Turquoise, as it looked just like Sleeping Beauty on the top strand. When i got it i cleaned up the Silver then got out my Sleeping Beauty beads and sure enough they were an exact match. If anyone knows what the 2nd strand is i would love to know. They are a little more green then the pic. Does anyone know the value? Has to be substantially more then the $20 i paid. Lol 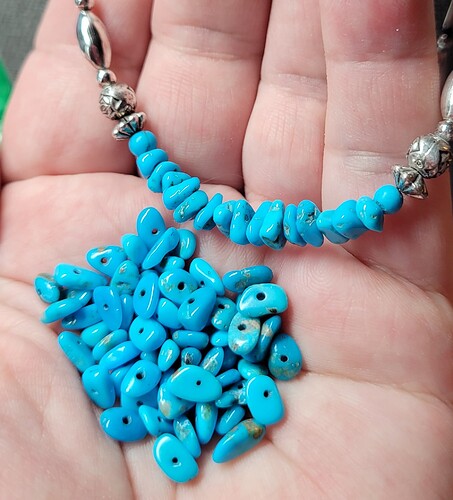 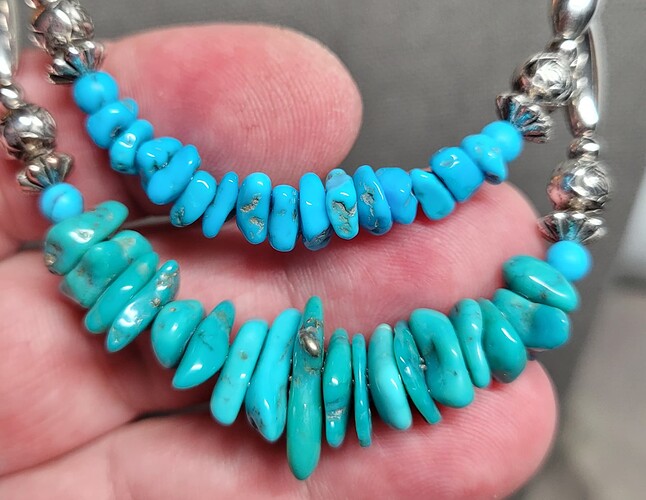 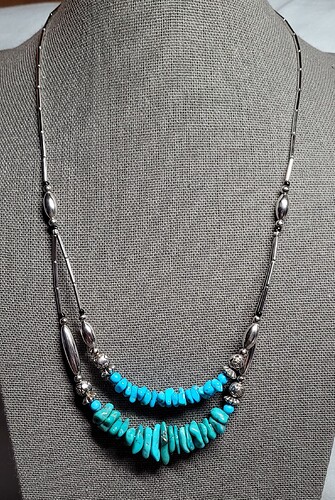 Maybe Kingman. They appear to have some pyrite inclusions.

You are refering to the blue i assume. Thats interesting, even if they are not Sleeping Beauty they could be a rare Kingman. The beads in my hand were sold to me as Sleeping Beauty but you could be right that they are Kingman. I was so surprised that they matched exactly. Like how often does that happen. Now the green had some spots of pyrite forsure. I will have to look for the pyrite in the blue. Do you have any ideas of what the green could be. Its such a beautiful color.

To me both of the strands look like Kingman; Kingman can be blue and green, and sometimes has pyrite and sometimes doesn’t. Kingman isn’t particularly rare (except natural turquoise would be more “rare” - but I’m not convinced that yours is natural) as far as American turquoise goes; maybe more rare than say, Chinese turquoise, I don’t know. And just because someone says something is a particular type of turquoise, doesn’t mean they are right (I’m referring to whoever told you it’s Sleeping Beauty). A lot of sellers online are not accurate. There is a whole lot of assuming going on in the turquoise selling world. On this site, when people are talking about what mine someone’s stone may have come from, it’s pretty much understood that much of this is educated opinions, not facts. Surely you have seen that experienced people on this site have very different thoughts on which mines the same piece of turquoise might have originated. So maybe your stones are Sleeping Beauty, maybe they are Kingman.

Jason is the moderator for this site and has worked in the business for many years, so I would value his opinion.

And yes, stones from different mines can look VERY much alike.

But hey, whichever it is, it appears you have some American turquoise which IMO is pretty cool!

The color comes from the amount of iron vs copper. Higher copper content is more blue, higher iron is more green. That’s not a very technical explanation, but gives you an idea. You can find out more detail if you goggle it. 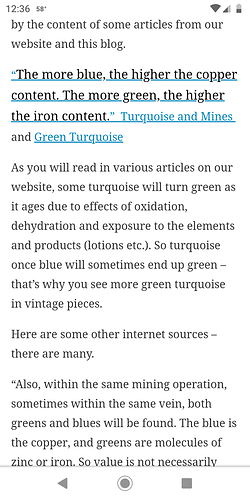 Here are two examples of Turquoise.
The drilled, slightly polished nuggets were purchased from Thunderbird Supply in 1986 or 1987. I consider them a reputable seller.

The first were sold as Kingman. There are a lot of color variations. Some have pyrite inclusions. 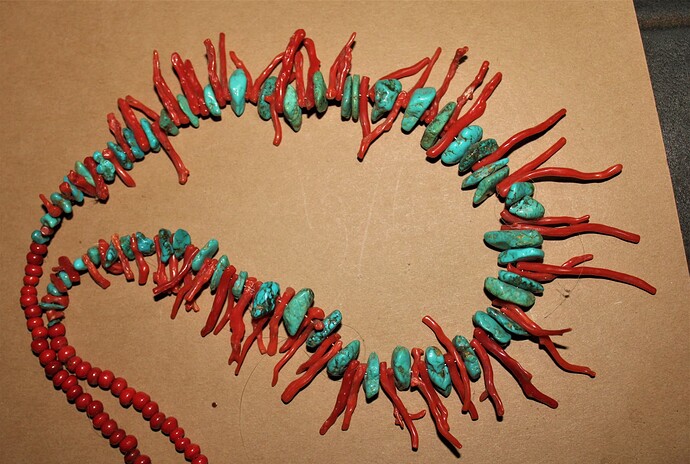 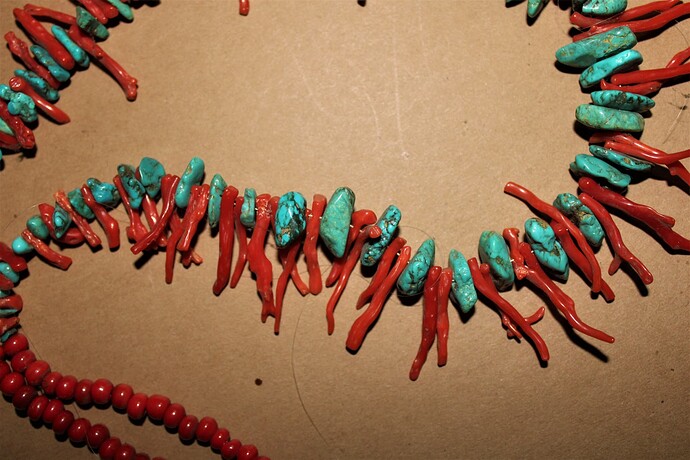 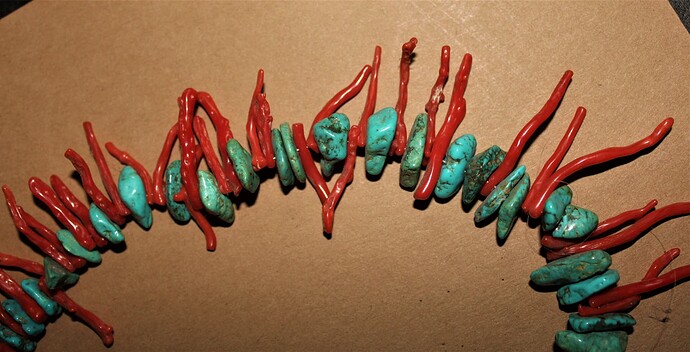 The next were sold as Sleeping Beauty. 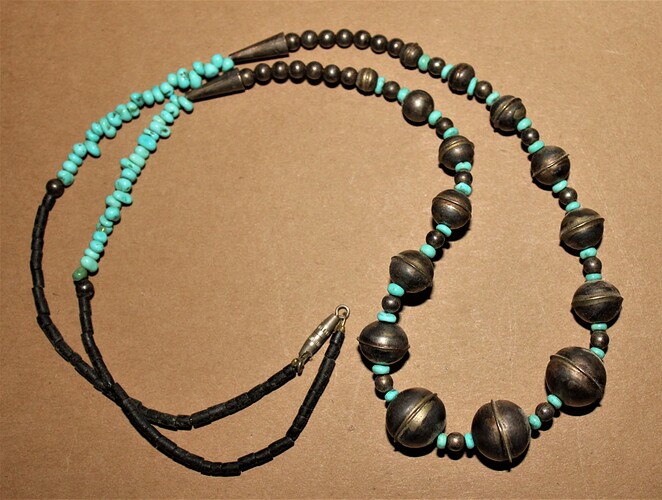 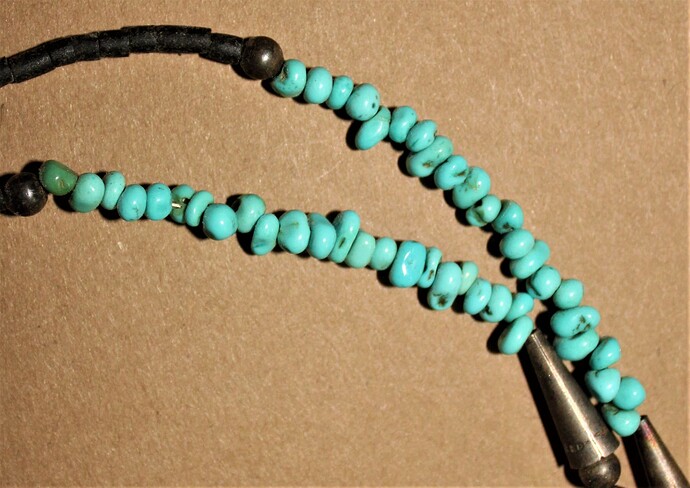 Some of the Kingman are the same color as the Sleeping Beauty.
I can’t remember if they were sold as natural or stabalized.

Hopes this helps some.

Your a trip, and yes it is pretty cool i finally got some American Turquoise. Lol.

So Kingman can be this really deep sky blue?

Thank you. I love the branch coral necklace. That is something that has gotten very exspensive.

I’m not trying to be a “trip.” I’m trying to help you understand turquoise. If you trust the person you bought the loose beads in your hand from maybe they are SB. But the necklace looks like Kingman. The necklace for that price I would assume has stabilized turquoise which would be a brighter blue. My understanding is that a lot of Kingman is stabilized.

Have you taken the time to look at the link Steve sent you? Check out the Kingman on there.

Yes i did look and no they are not the same color, not even close. Dont you find it ironic that my beads and the blue beads on the necklace are an exact match? What are the odds that you find matching Turquoise? Also i see no pyrite in the blue, in case that that helps with the difference between SB and Kingmen. Dont you think the aqua green looks similar to Carico lake? These beads do have pyrite, and its really beautiful to, almost like smooth pieces of unpolished silver. If you can speculate on the the Aqua green i am listening…just with a smile.

“Dont you find it ironic that my beads and the blue beads on the necklace are an exact match? What are the odds that you find matching Turquoise?” The odds are high. This level of material is sold in vast quantities/strings of beads.

Don’t like speculation on type of stone? Buy from dealers in specific types of turquoise. Outside that it’s educated guessing, and you’ve had input here by several members with one suggestion of mine.

Kingman. I think both strands look like stabilized Kingman. Definitely not Carico Lake.

No I don’t find it ironic they look so much alike. And I don’t think they look exactly alike. Matrix varies. They’re prob a similar color due to the stabilization influence. Stabilization takes low grade turquoise and makes it a brighter blue. I think that’s what happened.

Just from looking at pics I saw quite a bit of the turquoise in the link similar color to your blue and green strands.

Kingman can vary a lot in color. Here is some green Kingman turquoise I bought at their store. 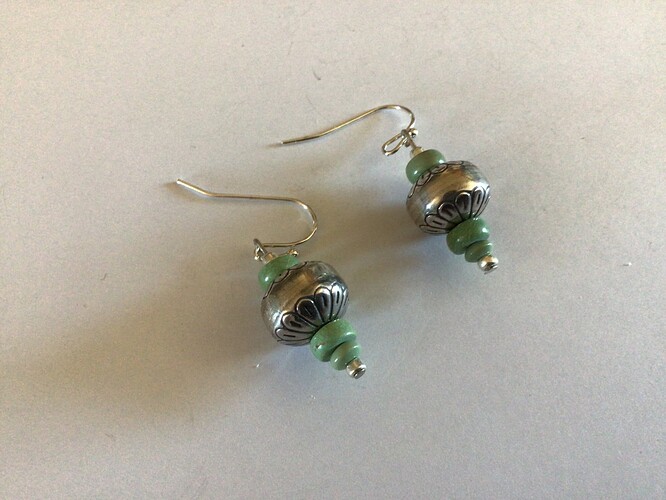