Mistakes, I've Made a Few: A Hard-Won Education

This will be a Gallery of Mistakes that I made during my quest for a cluster bracelet. This is meant to be a cautionary tale. Don’t do what I did.

Once I wanted a cluster bracelet more than anything else in the world, except maybe a squash blossom. I was around for the 1970s Native American jewelry boom, but I was a child. My mother worked in a saddlery shop that also sold very good jewelry on the side. The owners made trips out to Arizona and New Mexico every year and brought back inventory. I was often present in the shop when my mother had to take the rings, bracelets, pins and necklaces out of the glass cases and lock them away for the night. Sometimes I got to handle them. But unsurprisingly, my mother never bought a cluster bracelet for a 12-year-old child.

Flash forward years later, and I’m an adult with a mortgage half paid off, and my mother, now in her 70s, starts giving me her old jewelry, saying she’s not wearing it and wants me to enjoy it. Nope, no cluster bracelet. But I did get some nice things, which sent me to the Internet to get info, and then eBay listings, and I started pricing these bracelets.

Here’s where I went wrong.

I should have then gone to a reputable dealer, made my choice, paid my fair price, and I would have immediately gone home with something beautiful & worth my investment.

But no, I decided to do it myself, and to keep looking on eBay and find a bargain.

So let me show you how that went.

Here’s the first cluster bracelet that I bought.
The uniform color, which you see in older pieces, appealed to me, as did the design and stone arrangement. It does have some age on it. It’s a great look – it looks very nice on my wrist. I get compliments on it all the time, even in Arizona.
But it’s nickel silver, which means it has no silver content. Also, that’s block turquoise, which is artificial turquoise, which may or may not have some ground-up turquoise components.
I discovered what I had immediately after opening the package and comparing it with the real stuff that I got from my mother.

Here’s the second cluster bracelet that I bought.
I wasn’t going to fall for perfectly uniform, robin’s-egg-blue stones this time. I was going to find something in which each stone was individually worked and showed evidence of handwork. Again, this one has some age on it. And it looks pretty good on my wrist. Again, this one gets compliments.
But it’s nickel silver again. And it’s block turquoise, but of another kind – rather grainy, greenish with age (which the lighting doesn’t show). I suspect this is reconstituted turquoise which someone hand-cut to use.
I figured this one out pretty quickly, too, because the texture of the stone reminded me of block turquoise stones I’d seen in some Harvey era snake eye bracelets.

Here’s the third cluster bracelet that I bought.
Tired of nickel silver, I looked for the Sterling stamp. This one also has initials stamped on the underside.
Also, you can see some variations in the stones. Looks like matrix, which the other two bracelets lacked. Nope, it’s block turquoise again, but a little bit of golden coloring swirled through it to look like matrix in a real stone.
I think I knew when I opened the package, but I was in denial for a few days afterward.
Again, people like this when I wear it. I’m the only one who knows.

Each bracelet was sparsely described by the sellers, whom I do not think were trying to deceive me. I don’t think they knew what they were selling, either.
Each was inexpensive, which should have tipped me off. But I was bargain hunting, and gambling, which I shouldn’t have done, because I wanted a particular quality, the kind shared by the jewelry that my mother worked with and purchased back in the 1970s.
If I add up what I spent collectively on my three purchases, I’m starting to get close to what a decent cluster bracelet would cost.

All shared here to reinforce other informative posts on real or fake turquoise.

(BTW, yes, I did finally get my cluster bracelet, and it’s really a decent little guy, but I’ll save that for another post.)

My parents wouldn’t buy me a Squash Blossom when I was 12 either, it was only $75.00, so when I was 16 I spent my first paycheck on one for $125.00! It has Kingman turquoise stones and was appraised a couple years ago for $1500! I love it, good things come to those who grow up and buy it themselves

I have many stories about, The ones that got away as well. From Antique Stamps and Comics, to Jewelry. Imagine many of us do.

We should dedicate this thread to mistakes we have all purchased! Lol

Here was my very first mistake I purchased. About two years ago, I purchased this cuff for $40 and didn’t think twice. “What a deal!” I thought to myself: 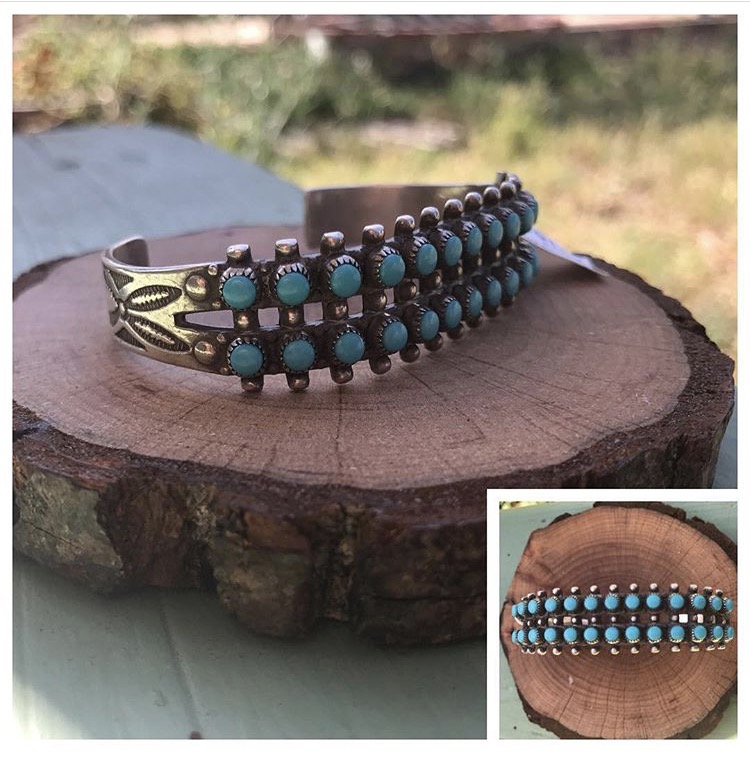 It wasn’t until after I discovered Turquoise People, I dug it out of my jewelry box and realized that it was block turquoise

So, into the shop it goes. I had no idea that block turquoise was used in vintage pieces. Live and learn!

I would love learn from mistakes, if others are game to 'fess up and show examples.

There is an interesting & thoughtful YouTube video made by a curator at the Museum of Indian Arts & Culture at Santa Fe.

She’s talking about the meaning of the color, turquoise, and the power of this color and its value in native culture. That value is something separate from its monetary value.

After hearing her, I’m looking at my pieces differently. Two of the three are older pieces and may very well be native-made. I’m also thinking how jewelry, like cars, is made at many “price points” for people of all different incomes to have the joy of owning it.

Bought these at the flea from a booth that was poorly lit. Got back in the car to look at my treasures and… it’s fake turquoise. Fred Harvey cuffs w/ block turquoise 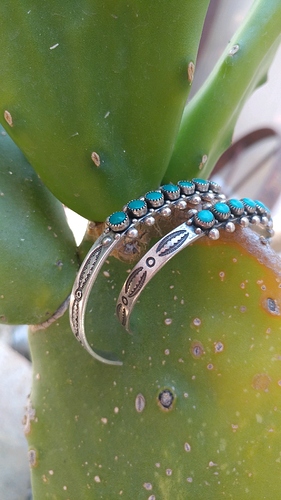 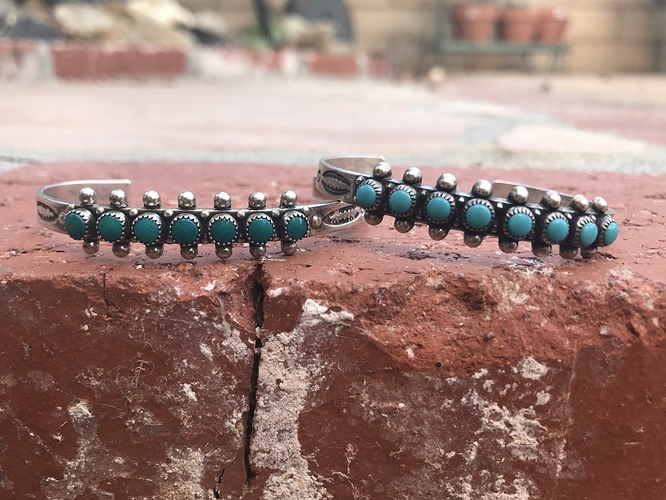 I paid very little for the two, so I can still recoup the costs. But I just don’t like having faux turquoise in the showcases at the store

I can match that.

Here’s a Harvey Era snake-eye. Now I know that if every single stone is the same blue-green, and if, up close, the stones look somewhat grainy, it is probably reconstituted & compressed turquoise. Sorry this isn’t as sharp as it ought to be.

I’m not a Harvey Era collector, but I went for this bracelet because the price was low and I liked the multiple rows, and I wanted to have one representative piece. Looks like we’ve got to be careful with those Harvey Era snake-eye bracelets.

Although I wonder if Harvey Era collectors are concerned as much about “authenticity” as “Harvey-Era-ness.” To me, the collectors who like early, simple and almost primitive-looking pieces care the most about untreated stones and they put up with imperfection, too.

This is still an amazing bracelet though! This is probably one of the nicer Harvey Era bracelets I’ve seen! But I guess times don’t change. Even when Fred Harvey era jewelry was booming and there was such a high demand for it, that composite stones became a regular alternative. Kind of like now when we see dyed howlite and other faux stones in silver jewelry

Reviving an old thread. How often do the Harvey era bracelets have fake stones? Was it past a certain year or era that they no longer used real turquoise or have they always used both fake and real stones?

You have a gift of words. These “educational bracelets” have given you a rich story that you have so generously shared with the rest of us Turquoise People devotees. Your experiences sound like the beginning of a best seller book.

I love hearing how as a 12 yr old you appreciated the quality of the jewelry in the shop your Mom worked at. Impressive for such a young person. And what memories you and your Mom have to share.

I am happy for you that you finally have a cluster bracelet that makes you happy. Good things are worth waiting for.

I would have sent them back!! I am on the lookout for a nice cluster bracelet as well. Your post was very helpful. I am finding that the quality bracelets start at $500 and go way above that. Is that your experience as well?

I have a great looking needlepoint bracelet…that is block and probably pot metal. The only saving grace is that it came in a jewelry lot.