By looking at the stamp work, is this Native American? How about what type of turquoise also?
Thanks in advance for looking. 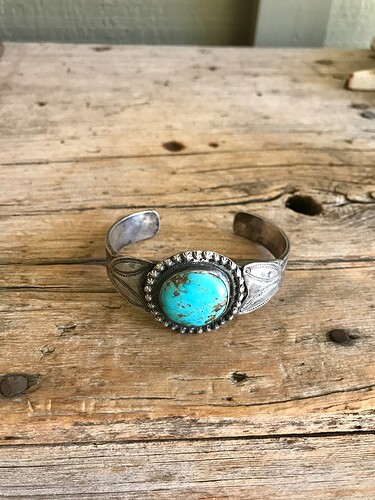 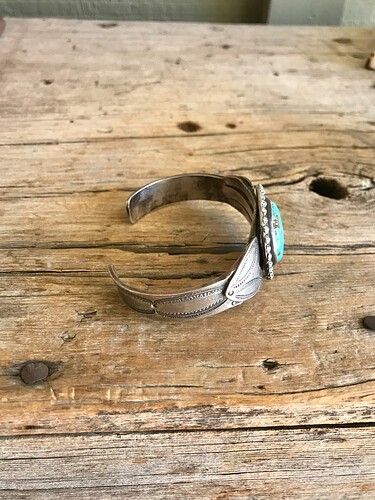 Unless you purchased the stone and the seller told you or the artist told you, it’s hard to know. Many of the different kinds resemble each other. Some mines like Kingman produce a variety of different shades and features. I would say it’s the pretty kind of turquoise.

Stampwork, construction, even gauges all look like Navajo work. Particularly interesting features are the shot work, individual shot hammered into a beading block and arranged around a twisted square wire wrap around the stone. The stone is medium quality natural turquoise, and interesting because of the way it is cut. Back in the early to mid 70s the Levian family from Iran used to sell Persian turquoise from the Damgan region of Iran that looked like this. https://www.mindat.org/locentry-662054.html

The bracelet shank looks like a traditional split shank style, from14 gauge sheet, with 18 or 20 gauge stamped fans. One would usually expect to see a shank from 6" sections of sheet cut to size with a shear, however it’s clear from the saw marks on the sides of the metal that the silversmith cut this shank from 14 gauge sheet with a fairly coarse jewelers saw.

Thank you kindly for your informative response!

You describe work so perfectly, may I ask you how you would conjure up the description of the detail around the orbs of this ring please? I would be ever so grateful. 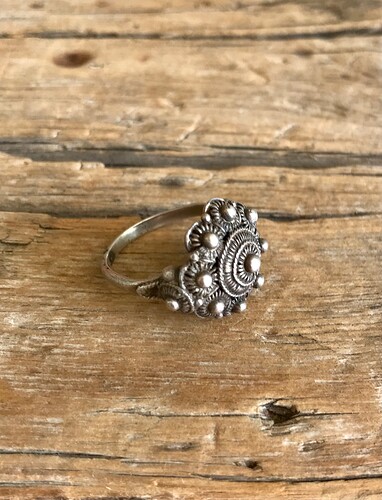 The ring you posted looks completely hand fabricated, employing either shot, or round stations (orbs) of repousse, surrounded by coiled and slightly flattened silver wire with twist wire borders. Not Native American, but certainly the product of highly skilled hands.

Bali comes to mind, but definitely an eastern aesthetic.

Thank you kindly, once again.

You’re quite welcome. Are you in the UK?

no, I am in California.

Dutch Button Ring, Handcrafted Sterling Silver called Zeeuwse Knoop! I had one of these🙂
Vintage.

I use it in a wry satirical way all the time. I live in New York State

The ring or the expression?

Found a bit of background on the origin of the button design on Dutch Wikipedia. It’s apparently originally Sephardic Jewish, and came to Holland when Spain ruled the Netherlands.

Translated from Dutch:
"According to tradition, the knot is modeled after the flower of the Astrantia or Starwort, which is also popularly called Zeeland knot or button. However, the floral pattern has its origin outside Zeeland. Incidentally, the Astrantia is not a native species in the Netherlands and the plant was not given the nickname Zeeland button until around 1915.

“The Zeeland knot was probably once taken from Spain and Portugal by Sephardic Jews who were fleeing because they did not want to convert to Christianity. They settled in the Netherlands from 1492-1497. The Sephardim were often active here in trade, including the trade in gold and silver. Sometime between 1500 and 1700 they took the buttons with the well-known floral pattern. Jewelery was made after this example by Dutch goldsmiths, because the Jews themselves were not admitted to the guilds.”

“The filigree technique comes from Syria. It was brought to Europe from the Middle East by the Etruscans, who lived in present-day Tuscany. They embellished their jewelry with spiders at that time. The pinnacle of this Etruscan art was in the 6th-5th centuries BC.”