I’m posting a vintage ring by Cippy Crazyhorse. The ring was purchased by an elderly friend 30+ years ago when she visited Cippy and Susan at their home in Cochiti. Anyway when she was selling a few things years ago, I purchased this ring. As with all his work it is very heavy and has not only Cippy’s typical hallmark, (backward and forward Cs), but also an arrow. I’ve not been able to find anything about his use of an arrow. Please excuse the moleskin in the photo…I wear this occasionally and did not want to have it sized (probably 50% of my rings have moleskin😆). 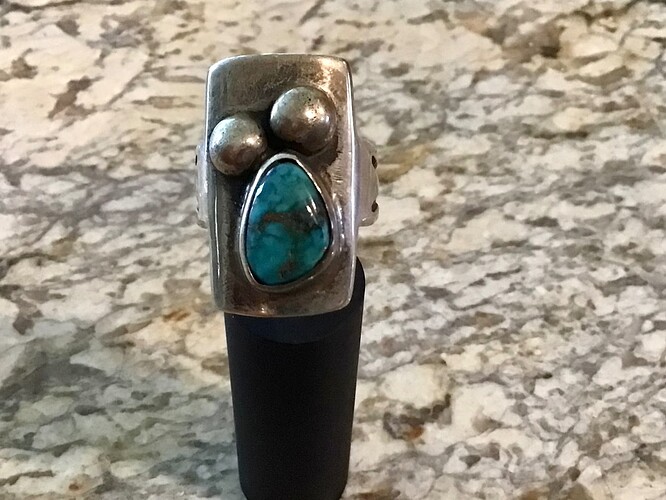 Hougarts says the arrow is since 2016, which complicates your friend’s timeline. There are several hallmarks for him given in Hougarts. You could write Sue and see if she agrees on the vintage of the arrow hallmark.

I have three Cippy pieces, I think early 2000s and maybe up to 2010 for one–all with CCs and Sterling only.

That was quick, Thanks @chicfarmer!
I’m sure I initially tried to find it in Hougart. I’m delinquent and haven’t ordered the latest edition…is that what you used. I saw Cippy, Sue and Waddie at the Heard show, but forgot to bring the ring and didn’t even remember to ask. My other Cippy pieces are newer with his double C hallmark. I read Cippy, Waddie and a lot of others will be at the Wheelright the Friday and Saturday of Indian Market in August. I’ll try again then…

I love seeing your pieces and learning. I’m being more careful with spending now due to inflation, but will save money to spend at the Eiteljorg Art Market in June. Can’t wait! Who knows, maybe I’ll have to post from there if I can’t make up my mind what to buy…

@Ziacat good to hear from you! Yes, this whole economic situation is concerning; trying to be positive is not easy!
I’ve always wanted to go to the Eiteljorg show! I do have a friend and collector who lives in Indianapolis and supports the Eiteljorg…hope to get there before I die (ha!)
Have fun, and post if you need help making a decision😆