Can you tell me if this is real turquoise 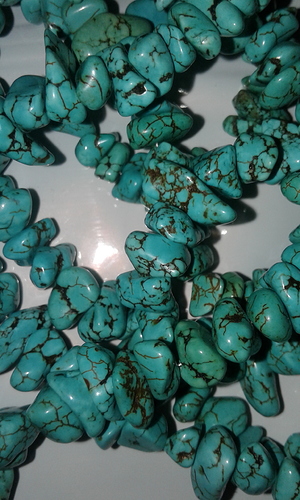 Hello, it is always hard to tell from a picture. We get strands like this that have those matrix patterns that are dyed rocks. My guess is this is the same thing, but I definitely could be wrong. If you are not attached you could always take a hammer to one of the smaller stones and see whats inside.

That looks like dyed howlite. Like Jason said smash one small stone. It should not break that easily if real and should be the same color and consistency throughout. If fairly soft and white or solid color inside it is not real. See the post on East Coast Find. That is what fake looks like.

I often see this in " Tibetan " or to use a term modern term, Boho, Southwestern, also sells crystals, etc., stores all up Californias Coast.
Jason nailed it, because Jason is The Man. I was going to give his advice, hot on with a hammer. However, there are other ways. I put some in a plant pot…over time they became white. Often a white hard chalk substance like fake bone makes up the middle of the bead or stone, then real turquoise shavings and dust, or fake are added to the outside to make it look like Turquoise. Often done with beads, I think the hole makes it easier. As well, look for Matrox lines. Lines that look painted, like a small river with many tributaries, this means often, dyed fake stones. People are happy to buy this, a decent salesman often just prices these low, and only tals if asked, often one says " reconstituted " Turquoise, or is just honest. I bought my Mum a fake Turquoise item, she loves it. I could afford it, we were on vacation. Just don’t call it Turquoise.