So, I have this old squash blossom necklace.... a novel by me

I was married wearing this necklace in 1994. My husband and i bought the squash from Manny Goodman, at the Covered Wagon in Old Town Albuquerque, as dead pawn, in early 1994. I still have the bill of sale listing it as such in Manny’s handwriting (or it might have been his wife Anne’s handwriting, as she helped us pick it out), but the pawn tag itself is long gone. At the time, Manny was unsure of the mine, but thought it might be Blue Gem. If any of you knew him, he was quite a character. I’m not so sure he was a mine expert, however. We have a close family connection, so we trusted him when he said it was a nice piece, within what our budget would allow at the time (not much).

My primary questions are about age foremost, but also about whether the naja belongs with the squash or was a later marriage, opinion on the beads, and your opinions on the stones, whether they are two different mines (naja vs blossoms), what possible mines those might be, and lastly a possible value.

The camera on my crap phone actually surprised me today, even though it’s hard to capture the matrix in the stones, which truly looks like silver metal, and is not grainy, black or quartzy. This is what has puzzled me over the years. I was shocked to discover a few damaged beads when you zoom in, looks like the seams may have been over-ground, or incompletely soldered? IDK The first full picture stretched out on the porch rail is a good representation of color, and of the appearance of the matrix. Some of the stone closeups are a little deceiving. One I’m holding by my thumb s pretty accurate. 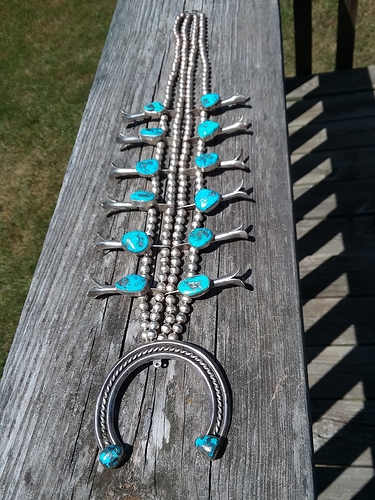 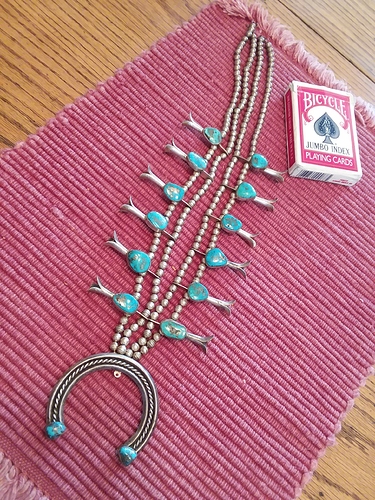 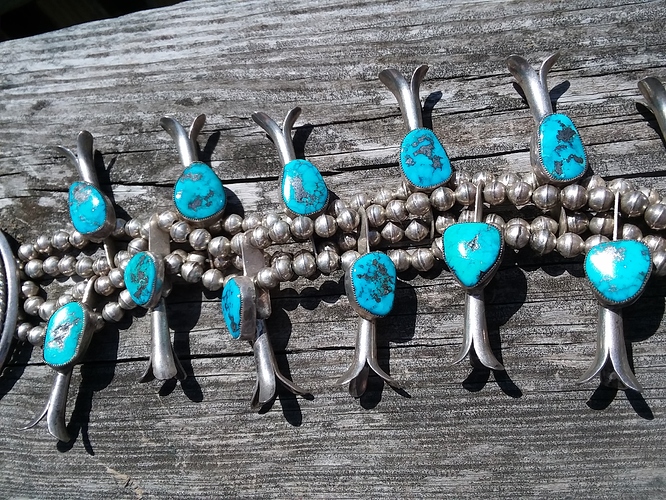 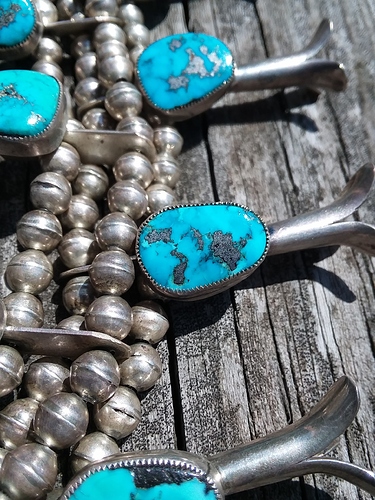 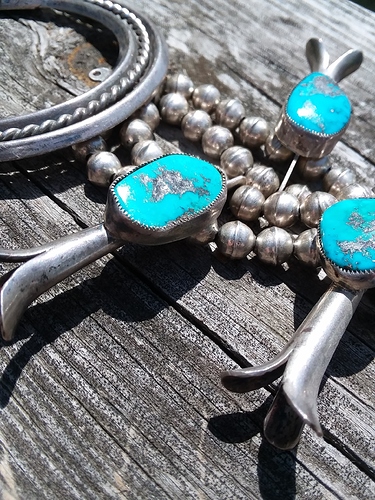 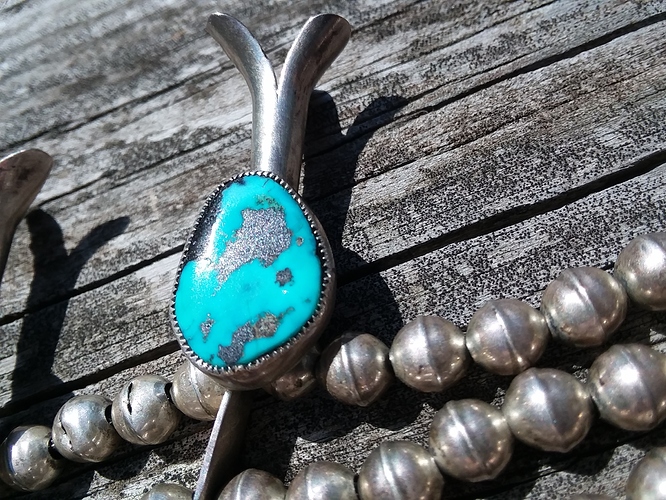 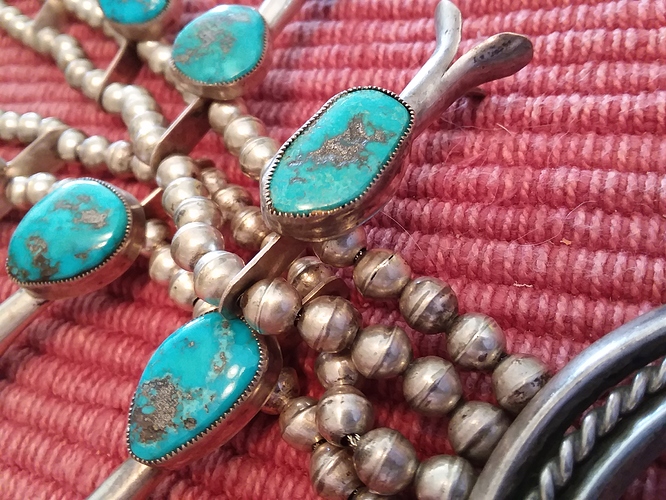 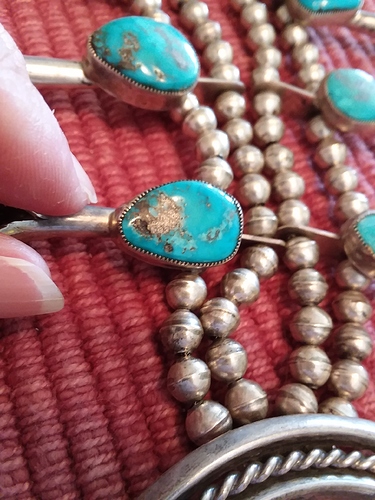 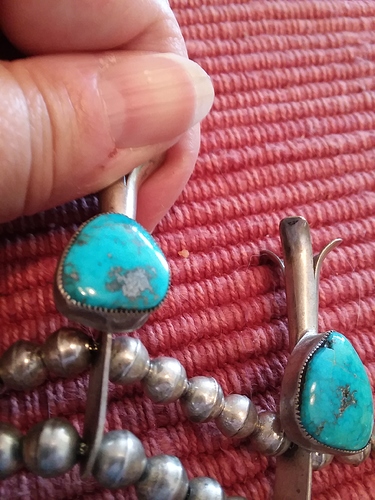 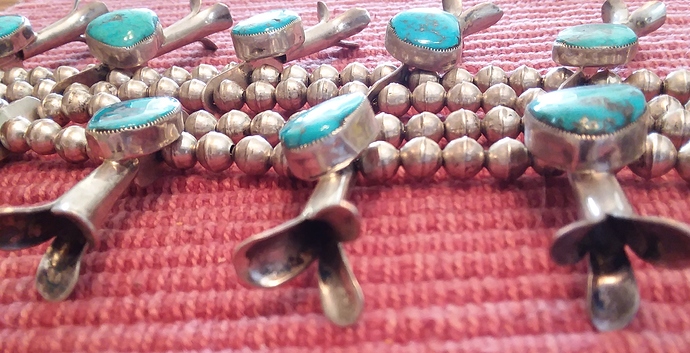 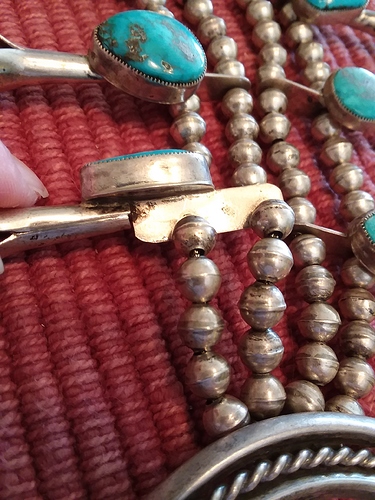 the stones in the naja however, have that textbook brassy blocky pyrite matrix that lead me to think morenci. Something about the naja - the twist wire? - makes me wonder if this isn’t original. I imagine it will cost me a few pennies to acquire a similar stone to replace the center drop. I’ve contemplated for years whether i should find a smith who could replace it, it was long gone before i acquired it, or if i should leave it as is. 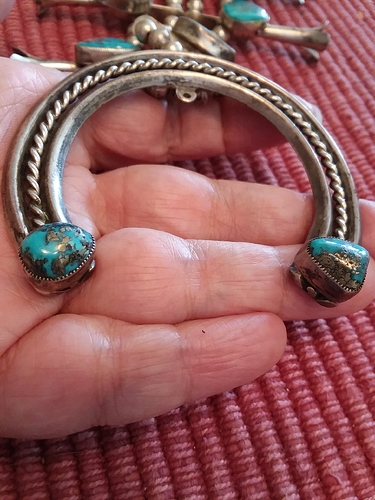 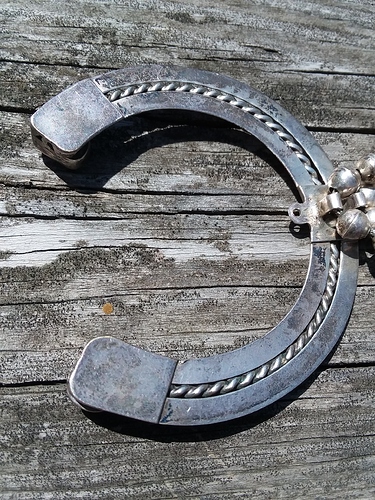 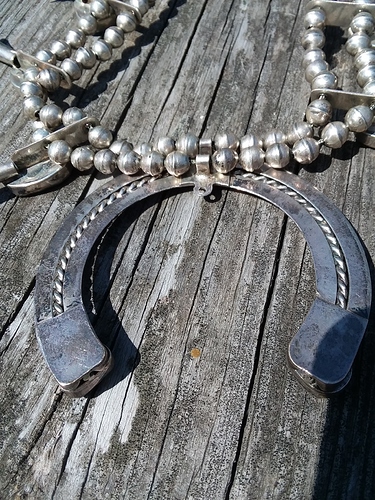 I’ve always loved most that this piece is all about the stones themselves, and the absence of ornate silver work really allows them to shine. For what appears to be a well aged piece, it has a very modern, minimalist look.

(egads - zooming in, please forgive the crumbs and cat hair on that placemat!! running off to wash it now)

The naja seems a little wide but seeing that the stones do appear to be the same type makes me think it was probably part of the same necklace originally, and the silver on that and the ends of the squashes look alike. Beautiful piece, I bet it really made a statement with your wedding dress!

I wonder how hard it would be to replace the missing stone. If it was me, I’d look into it but I’d hold out for just the right stone…it looks fine as it is so you wouldn’t be losing out not to replace that.

Thanks, Xtina! I appreciate your thoughts.

There are several makers on FB that do repairs, I’ve thought about sending it to them to see if they could do a stone match for that drop. I also thought about sending it to the jeweler that made our wedding rings, 25 years ago he had an amazing stash of stones. I just hate to pack it off in the mail, you know? I need to get my wedding ring sized too.

It has a channel set turquoise that i don’t trust anyone else to touch.

I look back very fondly on our wedding day and how we did it, It was a blend of things that were (and still are) very meaningful to us and our lives. Knowing more now about cultural appropriation, i might do things a little differently.

Might as well look…you might stumble on just the right thing and maker! I know what you mean about not wanting to mail your precious

, I worry about damage on my own stuff too much. I have a couple of items at Perry Null right now, so I have faith that @Jason runs a tight shop!

If you trust that ring maker, give him a call! Get him on the lookout for some great stones.

Sounds like a memorable wedding. And you clearly cherish the memories. As for the subject of cultural appropriation, we live and learn from the past. As long as we’re open to learning, that’s the best we can do.