Does anyone know what these are called?
I can’t find much information when I Google “stone necklace“

I don’t know what this is -if it’s authentic or an import? It’s heavy, 3 strands. The only marking on the cone ends are some lines. Thanks turquoise people!! 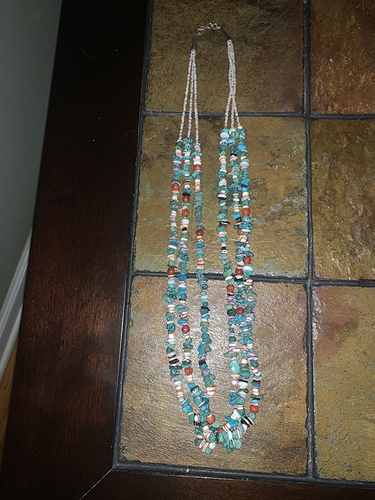 Hmm, I’ve never seen anything quite like this and I’m not exactly sure how I would describe it. Maybe something like “eclectic three-strand nugget, shell, and bead necklace on heishe.” I don’t believe it’s Native American made–to me it looks a little too mish-mashy to be Native American and I’m seeing some materials that I’ve never seen in Native American jewelry: quartz-like stones and whatever those red balls are. The findings I believe are commercial and the stamped lines on them are probably a design or brand mark that came on them, not an artist’s hallmark.

I would also say that things like this aren’t necessarily either/or as in either authentic (I’m guessing you mean authentic Native American) or an import. It could have been made in the US by someone who wasn’t trying to pass it off as Native American, in which case it would fall between those two extremes (although I do suspect some of the materials are imported). Those are my thoughts, but I’m interested to here other people’s opinions.

I agree - this looks like a reproduction of a really old trade bead necklace i saw recently that was NA. It looks like it’s strung and finished like a NA piece would be, including what looks like some legit turquoise, but it incorporates some “craft” beads, heishe and stone chips that are commercially available. Without a maker’s mark or hang tag, it might be impossible to attribute to any one person or culture.

It’s got a great, fun crafty look to it. As a layering piece with other NA or other ethnic pieces, i think it works. I would call this “southwest inspired.”

I agree with the other two. The mystery red beads are an imported red compressed sponge coral. As an american handmade piece it is still of value and has nice form and seems well made as an interpretation of traditional hand strung beaded artwork. Cool find for both a decorative bead and materials find.
~Koliopee

A real work of art! Whatever the origin, someone who absolutely knew what they were doing with materials, color, and composition strung and crafted that sumptuous necklace with love and lots of skill. Wear it proudly. Fantastic piece! Absolutely gorgeous!!!

The closest term for it in NA work is “treasure necklace,” which I think is really just a term for Santo Domingo or SD-inspired multistone bead necklaces made for the marketplace, as opposed to being for Native use.
There really is a tradition of Native worn and Native made heishi necklaces that “grow” over time with the addition by the maker of various colored beads, usually to mark ceremonial or personal occasions. However, this very colorful, deliberately random-bead mishmash style, with a crowded appearance on the string, is a Santo Domingo specialty developed for the marketplace. Not that I’m assuring this is Native work, just explaining the type.

Native American Indian treasure necklace is named for the multi-color and multi-material stones used to string this necklace. Made by Santo Domingo Pueblo artist, Priscilla Nieto. This beaded necklace is 3 strands of multiple kind turquoise,...

i am in agreement with the many above comments