This has me stumped

During this pandemic , I’ve used the extra time to educate myself on NA rings.

I stumped upon this while doing a google search and can’t make sense of it.

It is labeled “vintage” however we know how loosely that term is used. It appears cast (correct me if I’m wrong).

The history of casting metals in NA jewelry?

What tribe made this? (I’m leaning towards Fred Harvey era but also … Zuni??)

And what in type of turquoise is this ?

Any and all help would be greatly appreciated 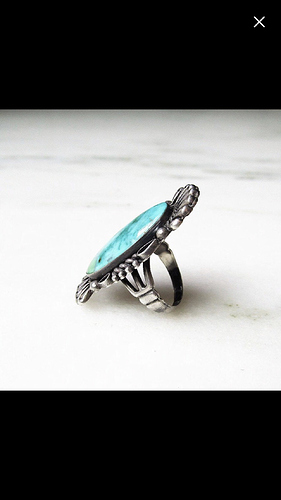 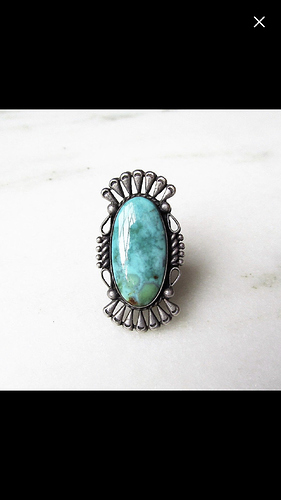 Any sort of marking on back or inside the shank? Beautiful ring btw reminds me of a peacock.

No- this was from a google search, while trying to teach myself about different styles. I don’t have the original link or any other photos.

However I do recall it stating it had no markings.

Doesn’t look Native American made. It actually combines a bit of Navajo, Spanish, and Zuni techniques to achieve a ‘sort of’ Native American look, Siver beads on the sides and silver fingers on the ends are aranged like Zuni petit point. 1/2 round loops on the side areas around and in between the beads are sawn out in the style of Spanish filigree, stamp work on the ends of the decorative fingers is reminiscent of Navajo. Blue stone looks like dyed agate rather than turquoise. Considering the amount of work that went into creating the design, the top of the ring is likely a casting made en masse from an original handmade master, as is the shank. The stone is likely cut to a template in lots, en masse, to fit the precast bezel.

This is likely a one of the many counterfeit ‘Indian Jewelry’ pieces imported with tear off tags to avoid permanent marking requirements for imports, and probably came from a factory the Philippines, Malaysia, or Thailand.

Thanks!! I posted on another forum and no one mentioned any of this.

Here is a photo of one of those tags. It was on a necklace I bought where the seller was silent on provenance. I should’ve asked, but didn’t. Turns out though, it is extremely rare to actually see a piece still with the tag on it. 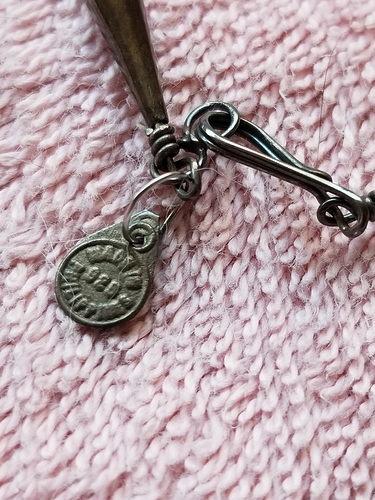 Good find! Most of the ‘tear of’ labels are actually little paper stickers. The one you posted is actually quite nice in comparison.

Hi MakiKonu22. To learn more about the torrent of fakes still being sold here as genuine, it’s well worth the time to read the following article from National Geographic. I promise you, it’s a real 'eye opener! History’s Biggest Fake American Indian Art Conspiracy Revealed

Sadly, the criminals discussed in the article linked above are still at it, and if anything have become even more active.

Well, I learned something new. I did not know about the paper stickers! Thanks mmrogers

So I did a reverse search and found the original source.

It would be interesting to know the truth. I know that’s damn near impossible with NA jewelry unless you are buying from the artist yourself.

Are there any other articles that can help identify fakes vs real?

When I zoom in on the photos from that listing, especially the underside, this doesn’t have any tool marks, irregular edges, visible solder, or anything that shows hand work of any kind. this would lead me to believe it was mass produced or assembled from mass produced parts. this doesn’t exclude that a NA person was employed to do that work, but it probably eliminates “hand made” from an accurate description in the strictest sense.

from the front, the metal portions also look too symmetrical and even to impress me as hand made or constructed. the texture of the “stamped” areas look cast (or probably more accurately ‘pressed’ from a flat blank) to me, which in itself isn’t a bad thing, but in this context isn’t quite right for this type of piece. casting on this scale i think takes a disproportionate amount of work and materials for such a small piece, when doing it by hand, and would probably take a master craftsman to create something so delicate looking via casting method. This does not have the ‘presence’ of something produced by a master craftsman, so i lean once more toward mass produced.

i don’t have van opinion on the stone, but i wouldn’t rule out some type of turquoise.

I would consider this a costume or southwest-inspired style piece. it is pretty, has a nice look but i wouldn’t consider it NA.

If you read the description carefully, they never actually say hand made or Navajo made. The implication in the “D1” statement is their escape clause - they could always say it was once owned by a Navajo woman and thus it becomes a Navajo woman’s ring.

All, or course, are my inexpert opinions.

Thank you for posting a link to a close up of this piece. No way this is a Navajo ring. Telltale porosity throughout all of elements including the twist wire pieces, and 1/2 round loops on either side of the bezel give this away as a machine cast setting. The porosity is the result of gasses within the molten silver escaping as the casting cools. Typically a result of casting too hot.

As you rightly point out, the stylistic inconsistencies, and technical details are not something a non-silversmith, non-jewelry expert could ever be expected to recognize. Counterfeiters are able to get away with passing off fakes as authentic precisely for this reason.

Hopefully you’ve read the above referenced article carefully. It’s extremely important to pay particular attention to who owns the store, and it’s perfectly fine to ask questions about how and from whom the jewelry was sourced. For me at least, if someone said they had purchased their allegedly authentic Native American good from “Gypsies” (as the Etsy seller states), I think I’d steer clear

The best advice I can offer is to know and vet your sources. If purchasing from store, physical or virtual, know with whom you are dealing.

Upon examination of the closeup shot, although it does have circular features throughout the stone reminiscent of, and typically seen in agates, I agree this could be some type of (treated) turquoise.

I agree with both of your statements. However I find it odd that if it was mass produced you might find more on eBay, Pinterest or Etsy. It’s been annoying me so I’ve spent the past two days just searching by the image and style to try and find anything similar to it. Which I can’t :-/

For whatever it is worth it’s been a great learning experience! Hahaa

“It’s been annoying me so I’ve spent the past two days just searching by the image and style to try and find anything similar to it. Which I can’t :-/”

Very little phony NA Jewelry is marketed just in the US. There were once huge markets for NA Jewelry in Germany and France, and throughout Western Europe and Japan.

In the early 80’s, over breakfast in the Hotel du Cygne near Les Halles in Paris I remember running into a fraudster with cases full of Phillipine made fake Zuni jewelry. I was there with authentic Zuni Jewelry to meet a client from southern France who wanted to purchase. During the chance meeting, the fraudster showed me his goods, which were exact copies of the same Zuni I personally purchased from Zuni Craftspeople in Zuni Peublo. He actually tried to sell me that crap based on the fact that the price was a fraction of what I was paying for authentic goods directly from the Zuni artist.

The whole point here is that not being able to find another example of a fraudulent piece here in the US doesn’t mean that there aren’t plenty floating around somewhere else in the world. Sadly, I can assure you, without question, there are plenty!

The criminals who engage in this activity are international, highly organized, and very good at what they do.

This was an interesting thread. I read the National Geographic article; shameful that people who claim to promote NA goods and help the artists do this (among others). They seem to have such a monopoly on that market that it’s really going to hurt to disentangle the fraudsters from that local economy.

Agree the ring in question looks a bit manufactured to me. Certainty not vintage, although some people have a different definition of vintage than what it really is! It’s pretty but doesn’t look handmade or NA. The fakes seem to get better all the time.

I agree. I had to submit my first ever document to the Indian Arts and Crafts Board in DC as I found a company selling many items that appear to be fakes or misrepresenting them as Navajo and Zuni. I was however kind enough to tell the company, however after a few days of them still uploading MANYYY items, I went ahead and pressed submit.

@Makikonu22 Glad you didn’t let it slide without sending…they are too bold if you warned them and they continued selling the fakes!

Thank you for saying that. It is never fun reporting someone. I def had some guilt and anger in this.

What really pissed me off was that they said, “We have been studying and trading in this material for almost 50 years and like to brag that we know our stuff but you aren’t allowing us to prove our case?”

After having informing them they had sold me 4 rings & they stating “send it back to us”. I told them I would not as in the selling of fakes is illegal. That if I sent it back I would be part of the larger problem of allowing it to still be in the market. So even though I am a couple hundred of dollars, it was better to get it off the marketplace.

…I was even polite enough in suggesting to them to go through their inventory of past and present to learn. Which I was told “ The way you are communicating this issue to us and being very one ended seems very scammy and nefarious. We would no longer like to do business with you”. It’s not my fault that if they want to deemed as Zuni or Navajo, or can’t simply look up the rules!!!

@Makikonu22 well…just goes to show it’s that boldness I mentioned. Turning it around on you like you’re in the wrong and that they have no fear of the law takes some balls. And they clearly don’t think what they’re doing is wrong. Hope they will be prosecuted.