Turquoise from the Black Widow Mine

Black widow turquoise is a very obscure mine. I decided to write up this post because I had so much difficulty finding information about the mine, and hope that if anyone else searching for information on this mine, might stumble upon this post.

I inherited this little cab from my grandmother’s estate, with a handwritten note on the back of the business card of the gentleman she purchased it from. My grandmother was was interested in jewelry making, so she enrolled in a jewelry making class at her local college sometime in the 1960’s or 70’s. A man would stop by the class to sell cabochons and rough minerals to the students to use in their projects. She purchased this cabochon, along with some malachite and tiger’s eye, both very popular stones in the 70’s. 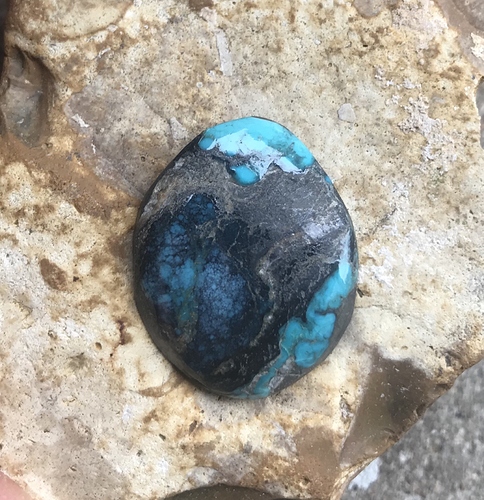 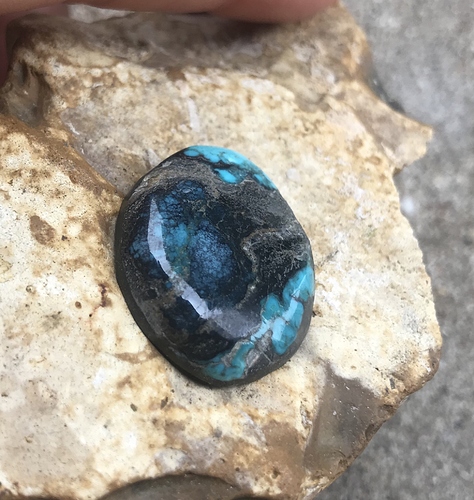 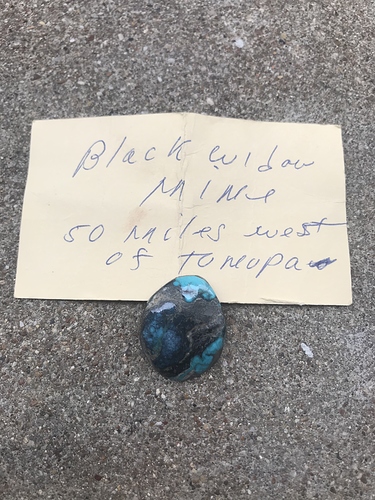 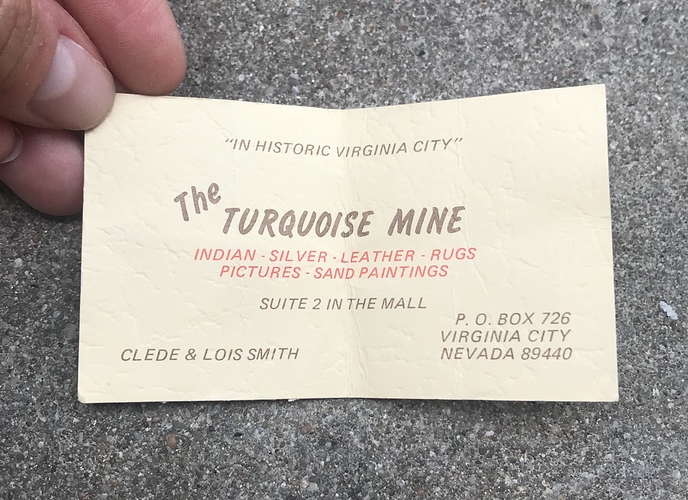 The cabochon has lots of matrix. Actually, the cab itself is mostly matrix. My dad recalled my grandmother being very excited about purchasing the cab, because during the time she had purchased the cab, the mine ceased production. She thought she had a treasure. The business card reads:

Notice how the business card has no phone number, which helps us date the cabochon roughly to a time where not everyone had a landline

I posted pictures of the cab on a Facebook page dedicated to turquoise discussions, asking if anyone had information about the cab or the mine. A man by the name of Philip Chambless came forth, who stated he was one of the current owners of the Black Widow Mine. The Black Widow Mine is located in the Caldelaria Hills of Esmeralda County, Nevada. I asked Mr. Chambless some questions about the mine that I thought other readers might find useful if they were also interested in the mine. Mr. Chambless explained that the Black Widow Mine was discovered in the early 1900’s by a man named Lige Harris. Although the mine was discovered over 100 years ago, production has been on and off again since then. When my grandmother acquired the cab, production must have ceased during this time period.

The Black Widow Mine changed ownership multiple times since the early 1900’s. When the mine changed ownership, the name of the mine often changed with it. The “Black Spider Mine” was another name it once held. This made me realize why I might of had such difficulty finding information about the mine. One section of the mine was mined specifically for iron ore, but as far as Mr. Chambless could tell from his research, specific parts of the Black Widow were always mined for turquoise.

There was evidence of lots of processing in the mine, but it’s unclear how much turquoise the mine has actually produced. The mine was rich with turquoise and produced lots of different varieties of turquoise through the years (a single mine will produce different types of turquoise as years ago by, and as different areas and depths of a mine are excavated).

Mr. Chambless described the turquoise that the mine produced as a hard turquoise, ranging from “almost white, what they like to call “white cloud,” to dark blue with black spiderweb.” Mr. Chambless and Mr. Richard Shull (Richard and Helen Shull are the other co-owners of Black Widow) were kind enough to provide some pictures of turquoise turquoise examples that the mine had produced. 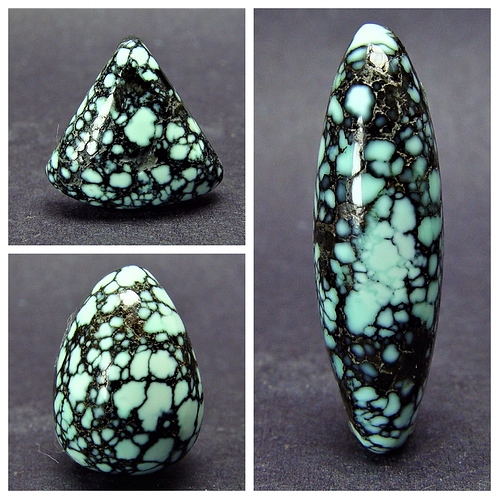 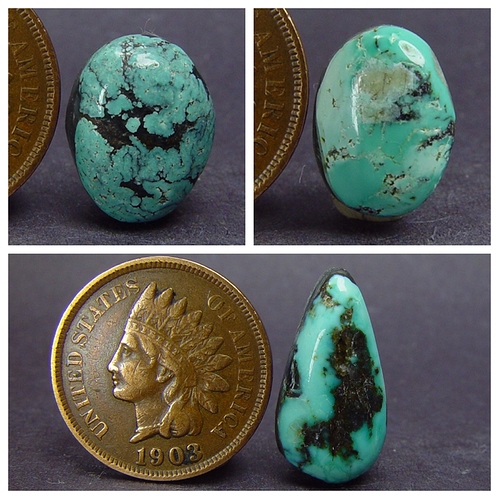 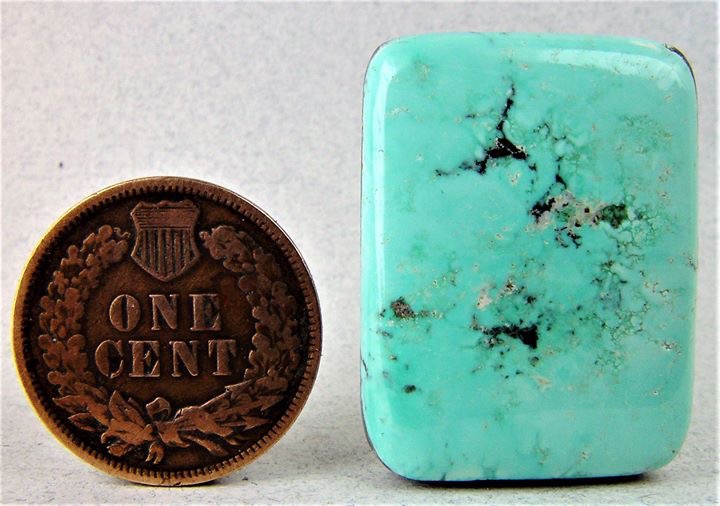 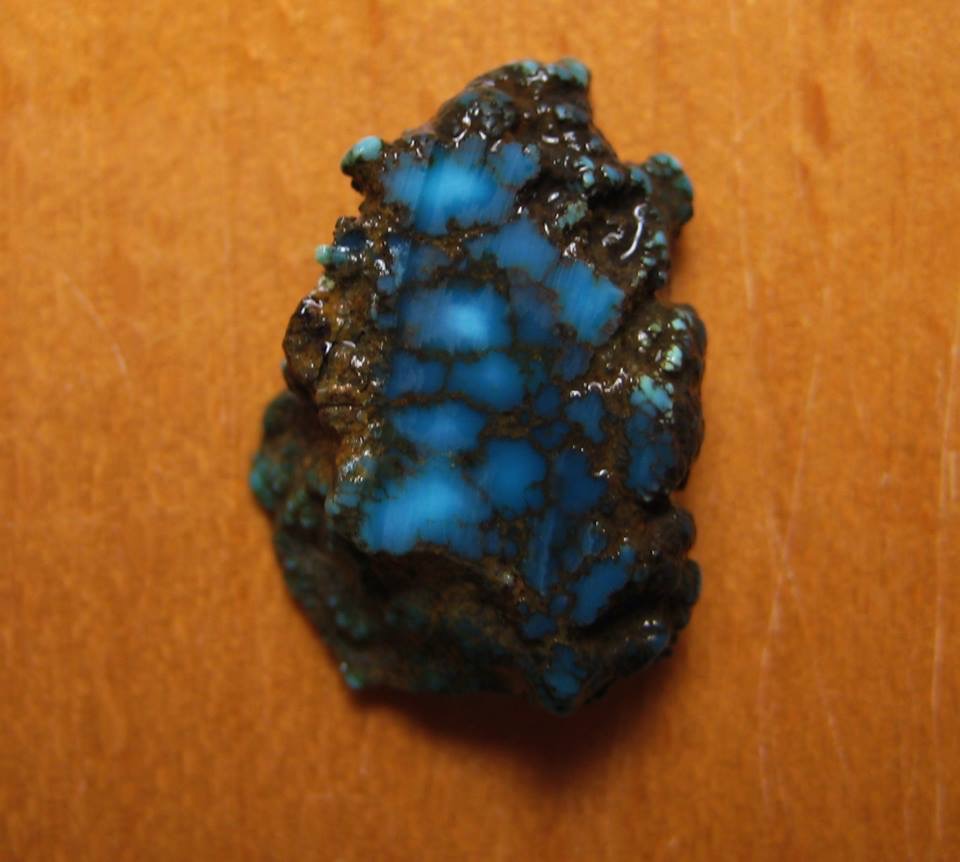 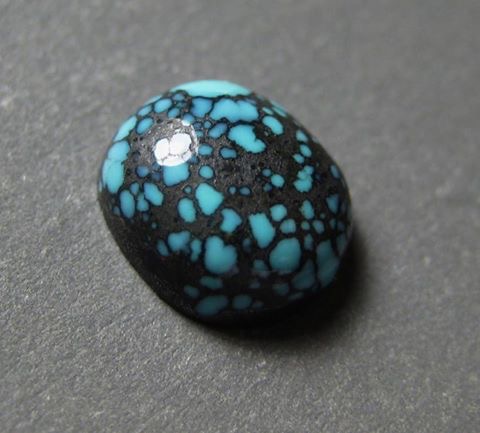 Author Joe Dan Lowry briefly discusses the Black Widow Mine in his text “Turquoise: The World Story of a Fascinating Gemstone,” where he cites Philip Chambless as the current owner. Mr. Chambless was kind enough to provide a photo of the text since I do not own it: 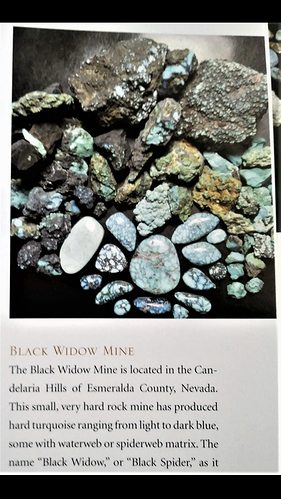 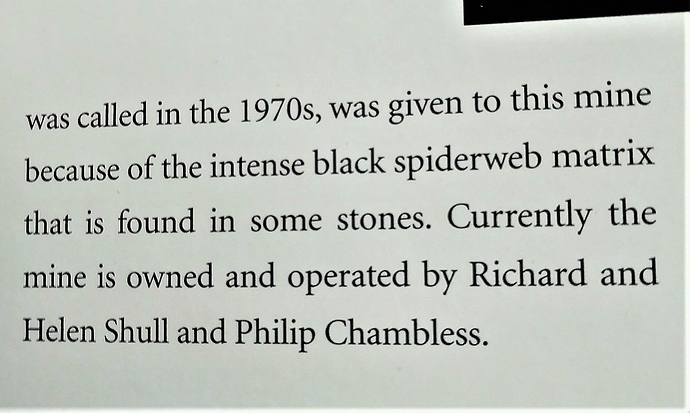 I made a comment to Mr. Chambless, remarking “…it looks like the Black Widow produced some very hard, high grade material. Mine is mostly matrix and I’ll forever wonder why she chose this particular cabochon…” Mr. Chambless had an excellent response, stating “Ya know Bree, that might have been the pick of the litter of what The Turquoise Mine had at that time. The Black Widow produces a wide range of material and the thing I like about Joe Dan’s book is he wants to show a full spectrum of what a mine produces. All too often a turquoise picture book will show only the highest 5% gem grade material and everyone thinks that represents total production of a mine.”

Thank you so much for this excellent post, Bree. Very educational for me since I had never heard of this mine. It sure does look like it has produced some high grade material. I love those top three stones of the pics that Mr. Chambless provided with the black spiderweb matrix. If I had guessed on those I would have said Chinese. And the last one looks like Lander Blue.

@OrbitOrange I had never heard of the mine either until I inherited the turquoise cab. I agree that some of the Black Widow turquoise looks really similar to Chinese turquoise. I also think it looks really similar to some variscite as well (like seven dwarves variscite). I just love the minty blue colors of some of the photos that Mr. Chambless sent me, they’re just so pretty!

Thank you for that informative and personal history of your stone. The background only adds to the interest of the piece.

Thanks from me too. Even though your grandmother’s stone has a lot of matrix, it shows a cool image of the growth pattern in Black Widow. Nice write up.

I will admit that I didn’t care for the stone too much when I received it. But learning about it and getting to interact with the owners really made me appreciate and treasure the piece a lot more.

Thank you for the kind words

It was fun investigating. It makes me want to purchase some extra nice Black Widow turquoise!

Thank you @Bigbree43 for writing this excellent, informative post! Great information, history and photos. Glad to learn about this mine and also about the book by Joe Dan Lowry.

Michael Rogers emailed me to confirm he made the ring I bought. He said it was Variscite from The Lucky Lady Mine owned by Jim Grimm. He noted he has been making jewelry for 55 years. It seems Nevada mines call it turquoise, but Mr. Rogers seemed sure it was Variscite.

My stone looks exactly like your first 3 examples of Minty Green Turquoise from the Black Widow Mine.

I think it is Chalcosiderite.

I am going to use Minty Green to describe the color. Apparently that is usually Chinese? There must be a lot mines around Tonopah, home of the Otteson Family. 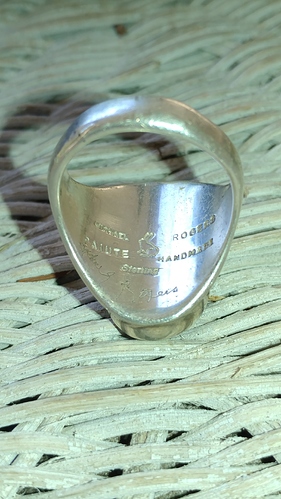 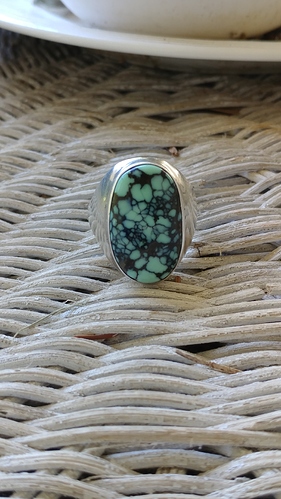 Thank you for this post. I recently visited Tonopah and bought this ring. Jim Grimm, the 79 year old man who sold it to me said he was part owner of the Lucky Lady Mine and he had comissioned 80 year old Paiute Silversmith Michael Rogers to make several rings with Lucky Lady turquoise. The turquoise looks a lot like the three minty green turquoise pictures you posted. 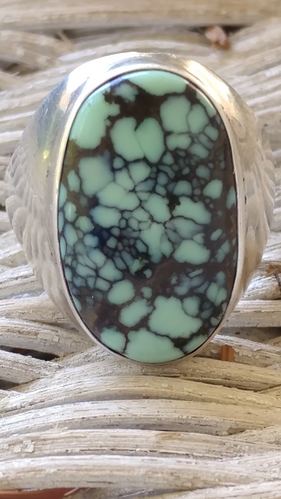 That is very interesting… I have never heard of LuckyLady mine anywhere near Tonopah or Candelaria …
Doyouhappen to haveMr Grimm’s address… i would like to get some Lucky Lady.