What can you tell me about this Zuni bird necklace?

This is a very old piece and I am wondering if the brown inlay material is tortoise shell? Does anyone recognize the maker? Are the birds any particular type and does the fan shape represent anything or is it just for pretty?
There is no hallmark on the necklace but there was on the earrings I once had but sold long ago. I didn’t write it down but I wanna say there was a “Z” or “L” or both involved… 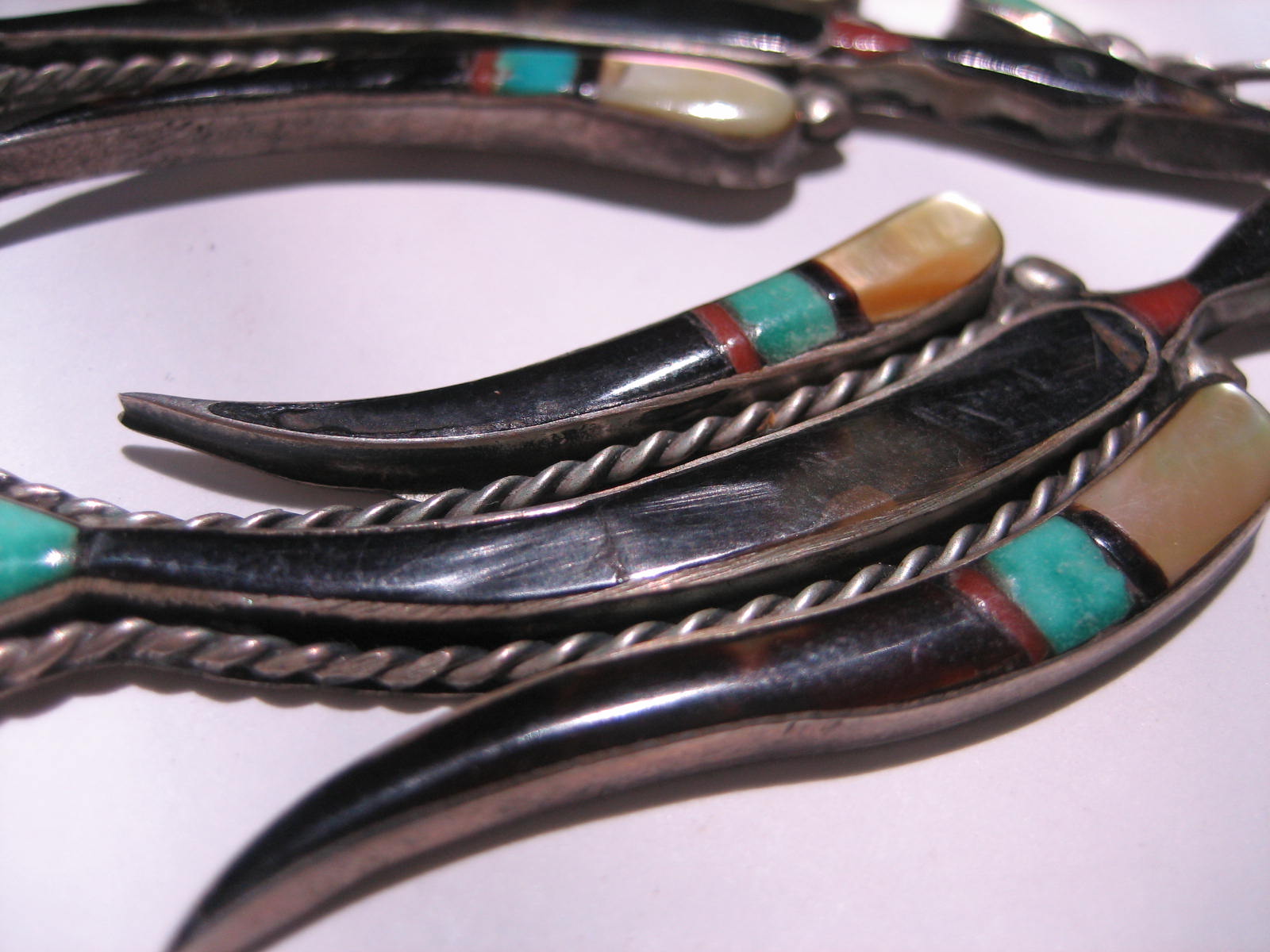 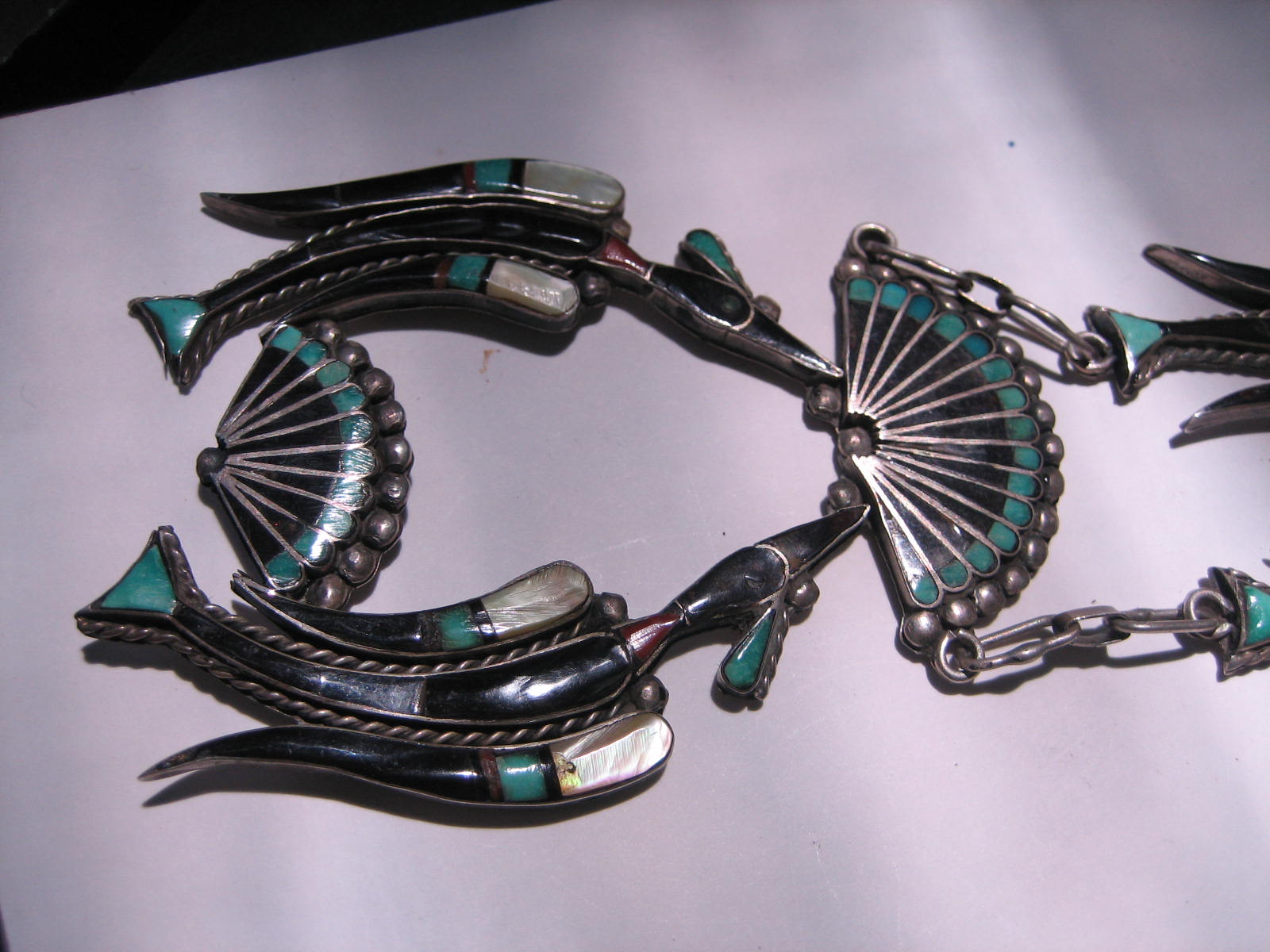 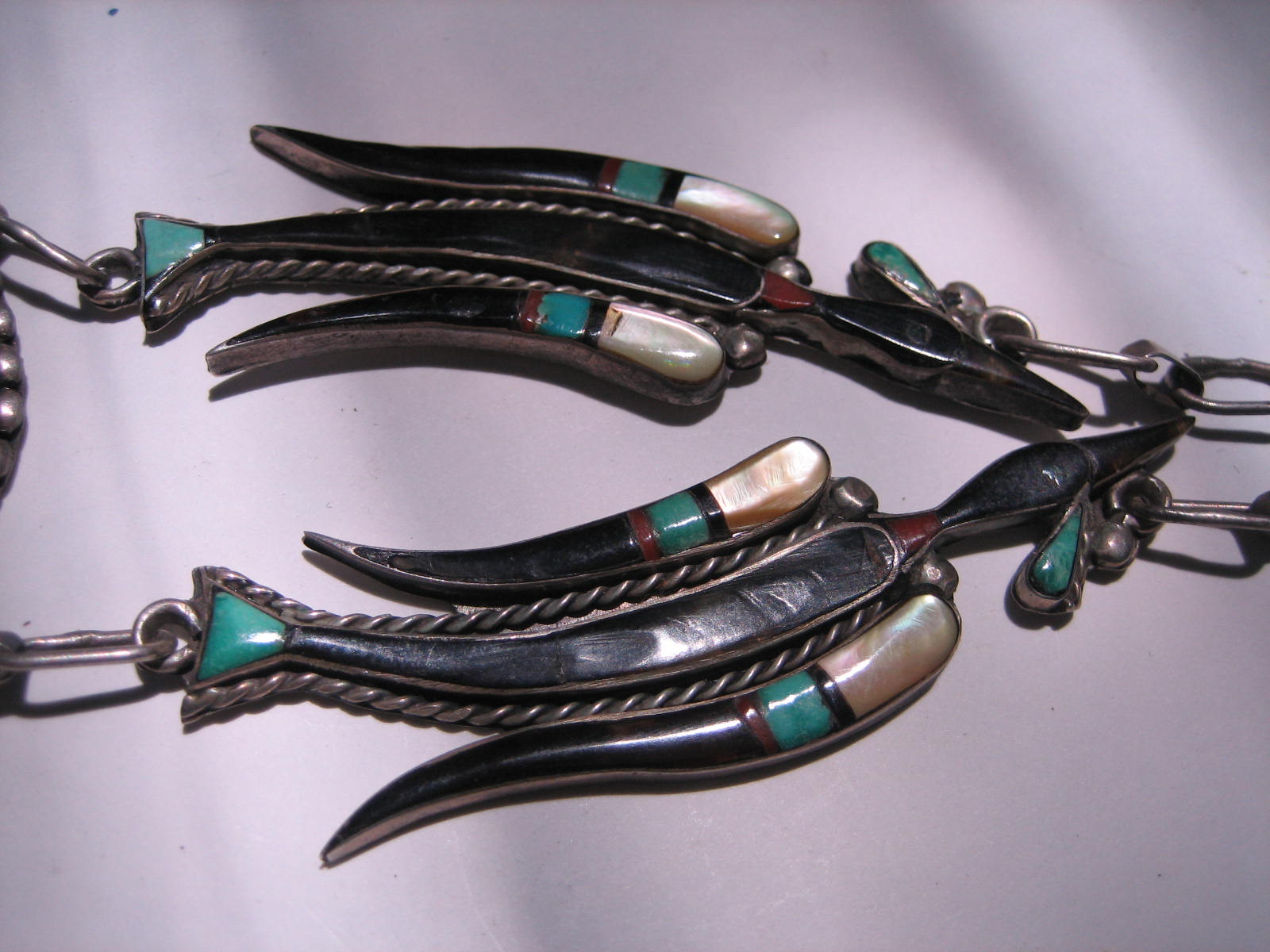 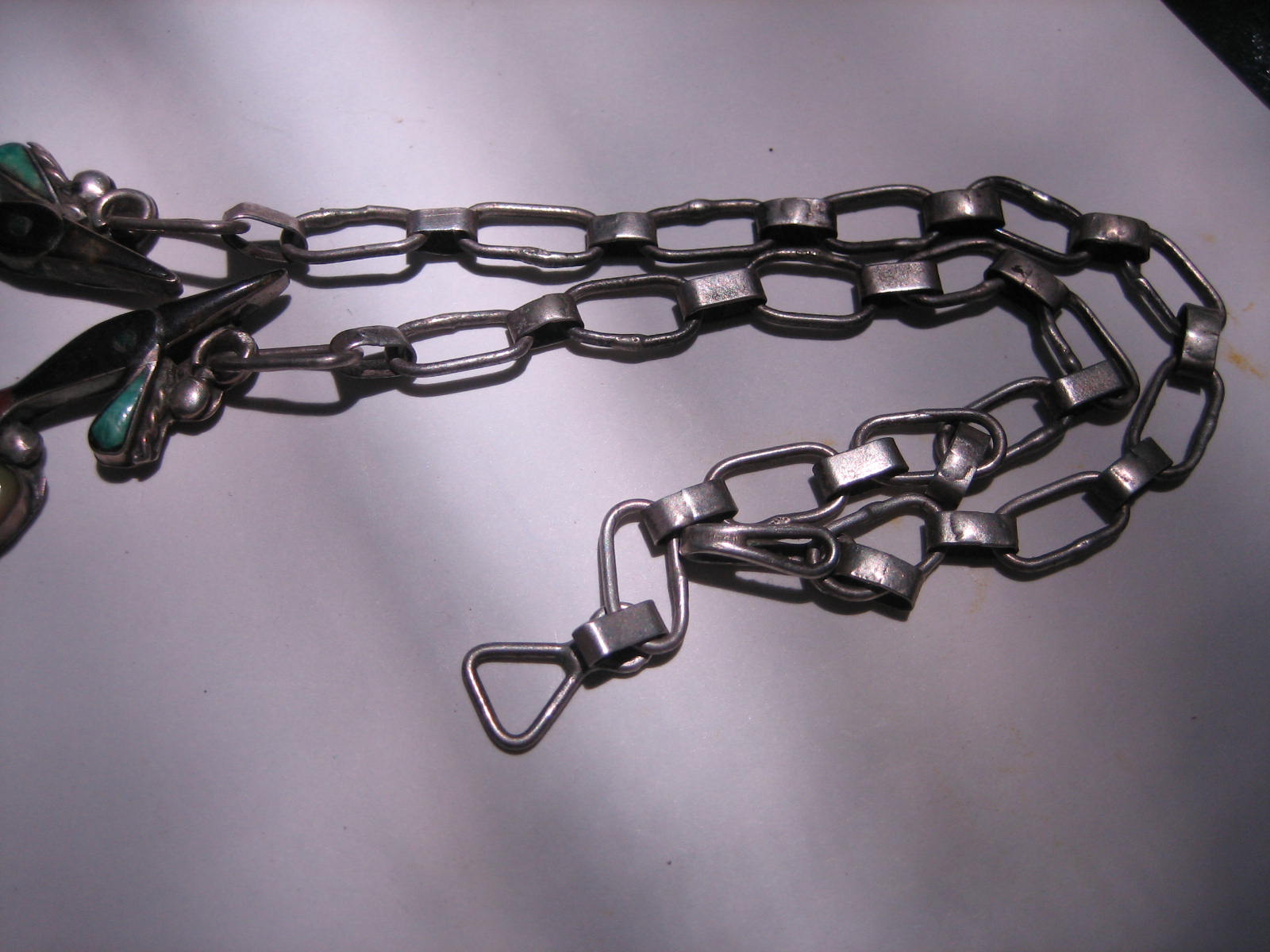 I’ve heard these called “water birds” when they appear in jewelry by the Zuni artist Lynette Laiwakete. Her jewelry incorporates similar figures. That makes me wonder if they are cormorants, and also, how many cormorants you’d see out in the desert country. I would love to learn more about them and their meaning in Zuni culture and religion. I am unclear about the differences among the peyote bird, the thunderbird and the water bird. Some of the thunderbirds I’ve seen remind me of woodpeckers. These waterbirds look far more sleek and sinuous.

I don’t know if the material is tortoiseshell or not. Horn can be made to look like tortoiseshell. There is a lot of synthetic tortoiseshell out there, but maybe Native Americans would be less likely to incorporate it in their work.

I do own two Zuni pieces that incorporate tortoise. One dealer thought it was amber, the other thought it was tiger eye. I knew it was neither, as I own some Victorian pique jewelry and it looks just like that.

I believe it became illegal to incorporate tortoiseshell into works of art (or maybe to import it for that purpose) in 1973. This may have been part of the endangered species act. I’m not a lawyer, and so I can’t give legal advice, but there are laws around selling it, even when it’s antique. You may want to do some due diligence around that, whatever you decide to do with the piece.

Thank you for the info, they do look like water birds. Cormorants would be present on the Colorado River…
I looked at Lynette Laiwakete’s silver work and it doesn’t seem like a match.

No, I don’t think your piece is by Lynette Laiwakete either – but she uses the same waterbirds and fan motifs in her jewelry. So those figures are part of the visual vocabulary within that jewelry-making tradition.

I wanted to add that I was looking through my “Art of the Zuni” three-volume set from the 1970s, and I found another artist whose work looks like this.

In Vol 2., she’s on pp. 10-11. She has a necklace with the same motifs as yours with matching screwback earrings and a ring. The example in the book appears to incorporate tortoise rather than jet.

It’s Adeline B. Yawakia, and her signature is ZUNI, A.B.Y.

(The book mentions that her mother was Lula Bowannie.)

hmmm… I don’t have that book and I doubt I ever will but after googling her I found a waterbird like this piece that seems way more stiff and straight than mine. Mine does indeed have tortoiseshell inlay, they may just not show in the photos.
When I was tooling around, I found under Adeline Bowannie a similar piece with birds. If you scroll way down the pinerest page you find it in case this transfer of image doesn’t work.
https://www.pinterest.com/pin/123637952245721196/ 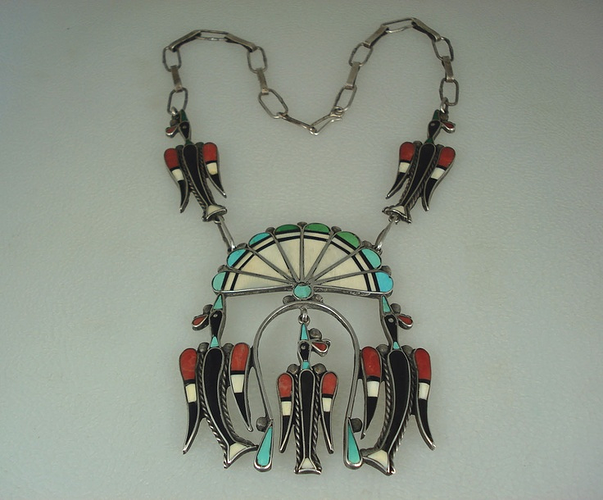 Hey thank you for the info. You’re awesome!
What do think about the references I been seeing to the peyote bird?

The brown inlay looks like tortoise shell, but faux tortoise shell is also became a readily available material after the ban was put into place. The “hot needle test” also works on tortoise shell and will tell you if it is faux or real tortoise shell. Knowing this will also give insight as far as its age.

By chance I stumbled about this one from Zuni silversmith “H.E.U. Yawakia”. It has also waterbirds and is from the 70ties. 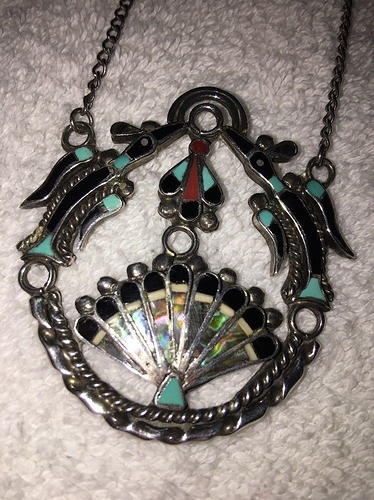 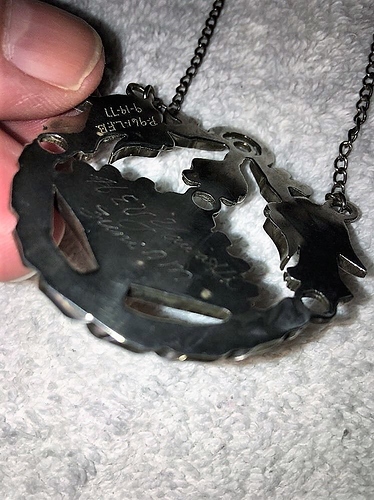 Wonderfulness! Without reading other posts ( so as not to be influenced ), this is my humble opinion.
Many names are attached to birds such as these. I prefer, on this work to think of them as " Peyote birds ". This is simply a thought. They are held together stunningly with 2 Fans. On fans, often some say " Headress ", I like the idea of a flowering pattern or water on this work.
They appear to be drinking.
I notice & this helps date work, the middle of bird seems to be tortoise shell, hard to tell. Red Abalone, shell, etc. Hard to say, but one bird may have had repairs. Well done if any.
Its very lovely. I would hold onto it.
Thank u 4 share. Hope anything I said may help. Best

Is there any other way besides burning a needle hole in it which you try to smell the difference between horn and hair?

Yes there is, eBay wrote an article in which they explain various methods that you can use:

If the needle test is used, “Genuine shell will burn to a black mixture and emit the small of burned hair. However few dealers are going to allow you to do this! A less drastic method is to file the material in an inconspicuous place with a piece of emery paper. Horn has an unmistakable odour of burned horn. However synthetics will emit an acrid chemical smell which is similar to that of acetone when subjected to friction. Genuine shell does not have a distinctive smell in the same manner. To a lesser extent the same effect may also be elicited by rubbing the material with a piece of cloth and then sniffing it. It is the heat caused by friction which produces the smell…”

Personally, I have been told that the “rubbing test” will emit a smell similar to formaldehyde, but I have tried this on tortoise shell that I knew was fake, and sometimes I could not smell anything! So yes, I should have mentioned to try this test first. But in my experience it has a 50/50 chance of working =\

Perhaps I just have a bad sense of smell

The pin test is a bit much. I use it on Ivory only. Tortise ages, unmistakably…as with everything, it takes practice, knowledge, and confidence. Totise shell used by William Spratling is unmistakable when genuine. Fakes? Everything on Ebay, labeled William Spratling pre 1960, fake. Save the occasional salad fork. What a salad fork that is however!
My advice? Look up the original works in Books, not the internet. Hold it, view it, etc. Then be forearmed and cautious.
Take nothing for granted, and listen to " War Stories " about Jewelry. Such as " This was owned by a Whalers Wife in 1840, etc…". As it doesn’t matter. Cheers