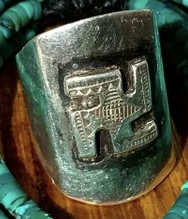 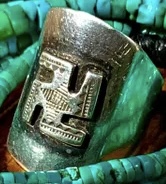 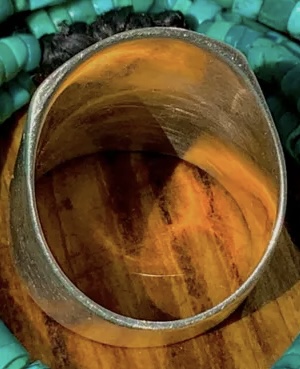 This would be my first whirling log piece. I’m aware of the stigma associated with this symbol and would be careful where and when I would wear it. I would not want to offend anyone.

Hi Joe, Not sure about the age, but I do like its design, size, simplicity, and patina. Neat piece.

They seem to have a steady supply and sales of vintage NA things. They also ask sky high prices relative to other dealers, and I’m personally put off by a no-return policy. Can’t speak to dating, but the design and definitely the stamped surface treatment are both extremely unusual.

If I were buying I’d definitely ask them how they arrived at the date. Maybe they have provenance info.

Edit: Now I have to wash my eyeballs out thanks to @Steve’s addition.

interesting reviews from when the shop was located in a former church.
https://www.yelp.com/biz/deja-vu-refinery-albuquerque

photos from the same timeline at the old church.
https://www.newmexico.org/listing/deja-vu-refinery/5325/

pretty sure he’s on ebay too, he models jewelry on his own hands, always a fist full of rings and full stack of bracelets i think. i remember going down this rabbit hole before. i was always baffled by how he gets his hands on SO MUCH high end super vintage inventory. looks like personal address in Rio Rancho, used to have a brick and mortar store front in Old Town near the big church, no longer there. probably closed due to covid, like a lot of shops in old town.

no doubt that the inventory has some choice pieces prices

A few years ago, I spoke with this Deja Vu guy on the phone about a buckle. He was obnoxious, pushy, and seemed shady. Needless to say, he lost my trust. I’ll admit, he does have some good looking stuff.

Thanks all for your thoughts. I might have to consider further whether I want to do business with them.

@mmrogers and @Jason do you believe the ring is as represented by the seller?

the overlay looks like it wants to be harvey era, but is the shank/blank a harvey era blank? is this a recent marriage of an older or possiby repro charm applied on a more recent ring blank? it just seems odd to have such a heavily stamped applique on such a big, oversized naked blank, esp for the age it’s trying to be? also the rounded inside corners of the logs feel off to me. a couple of then are more squared, but a couple of them are really round, like nibbled with a router bit.

Hi Joe. Honestly it doesn’t look Harvey era to me. Back in the day, stamps were less detailed, and if there was a pattern on them it was usually individually filed with a triangle, round, or domed file, and/or patterned by some combination stamping a design into the face, and working with the individual files mentioned above.The stamps used in this ring were created either directly or indirectly using a checkering file which came into widespread use decades after the Harvey era. Hard to tell from the photo, but the shank looks like it might have been lost wax cast rather than hand fabricated. That’s my take.

Thanks, I trust the expertise here and will steer clear of this piece and this seller.

Speaking of Harvey or Harvey era stamps, this is said to be an authentic Fred Harvey knifewing stamp obtained by Lyndon Tsosie (House of Stamps). Lyndon made a limited number of these Fred Harvey style pendants using the stamp. I think this stamp demonstrated the simplicity and minimal detail seen in Harvey stamps as stated by @mmrogers. 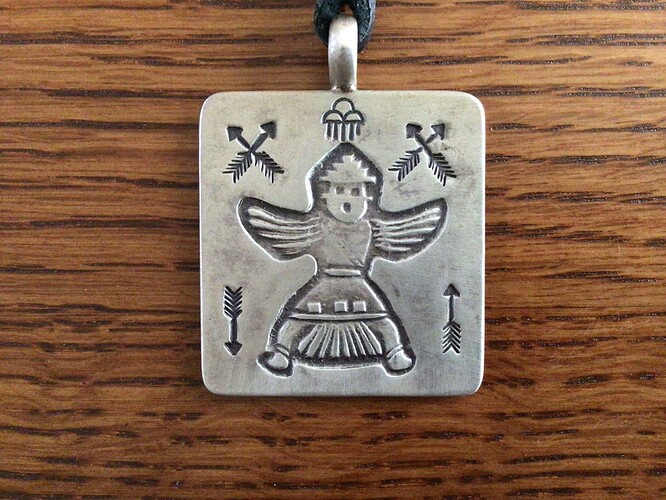 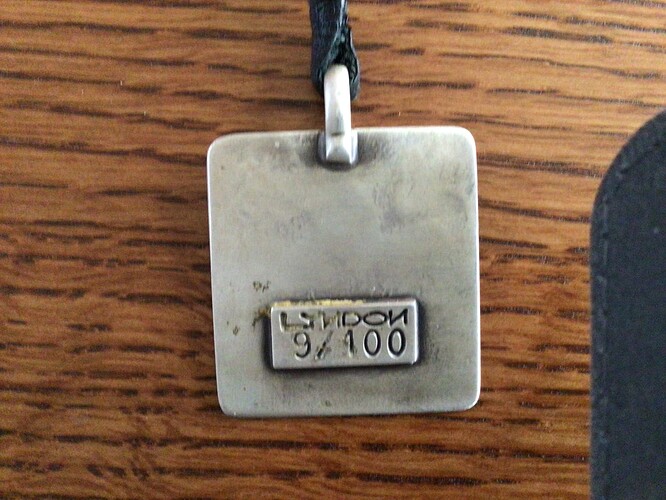 This does not look right to me. More like a Frankenstein piece.

@JW Can you please elaborate on your statement?

Crudely constructed. The whirling log section looks badly cut out from some other piece. The overly large face of the ring base looks very modern as to proportions and not in keeping with a ring that would have been made pre 1940-which is when the log design was dropped from the jewelry making vocabulary. The liver of sulfur or whatever darkening agent was used to highlight the log looks contrived and applied artificially vs actual patina. There might be designs that have this sort of applied appliqué type design but I don’t recall ever seeing anything like this.

also the tag looks fine. It would be nice to find one.
The ring. No.

Thanks @JW I thought you were talking about the Lyndon tag (ha ha). You’re exclamation makes perfect sense.

That ring looks Mexican to me. And pieced together.