Why are we turquoise people?

I was very fortunate growing up in the Midwest living the Western lifestyle with my family wearing turquoise jewelry, owning horses, taking Western vacations, and watching TV cowboys. But it was really the horses that was central to keeping the fire burning and all of us connected to the West including our enduring love for Native American jewelry and art.

Here are a few photos from the early 1970s. This one is of my sister and me. I’m the one on the right with the John Denver haircut and my sister wearing one of her turquoise buckles… 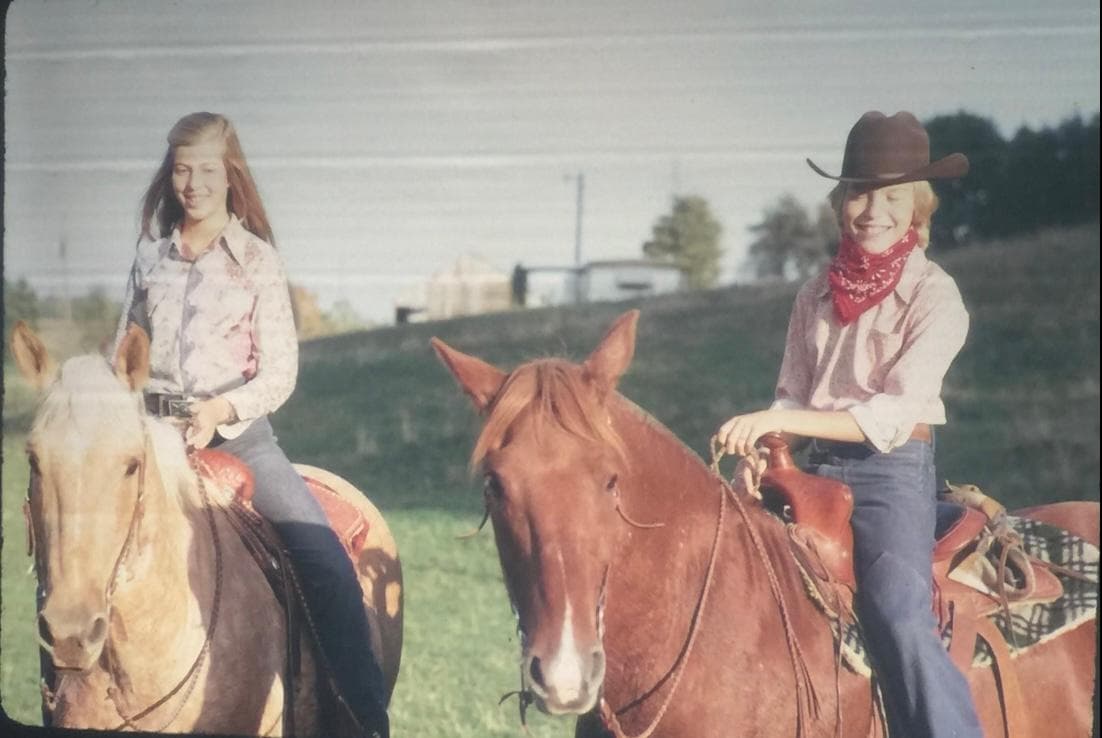 Dad and me ready to hit the trail… 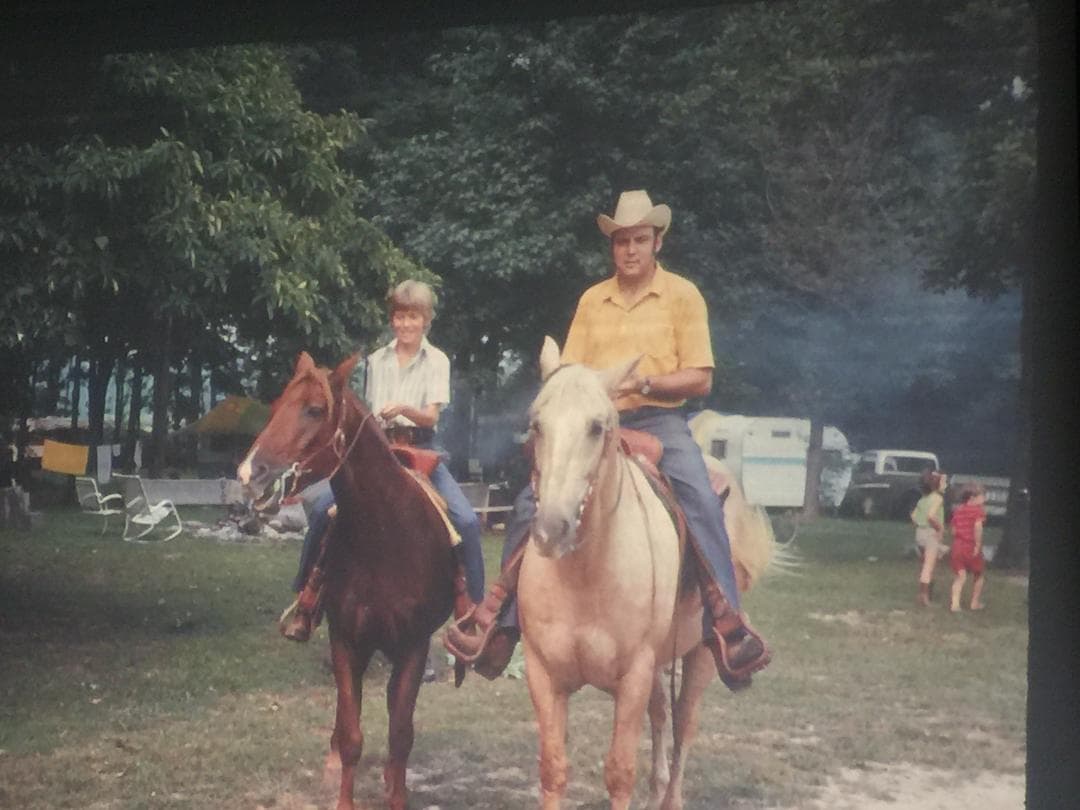 Freedom in the arena… 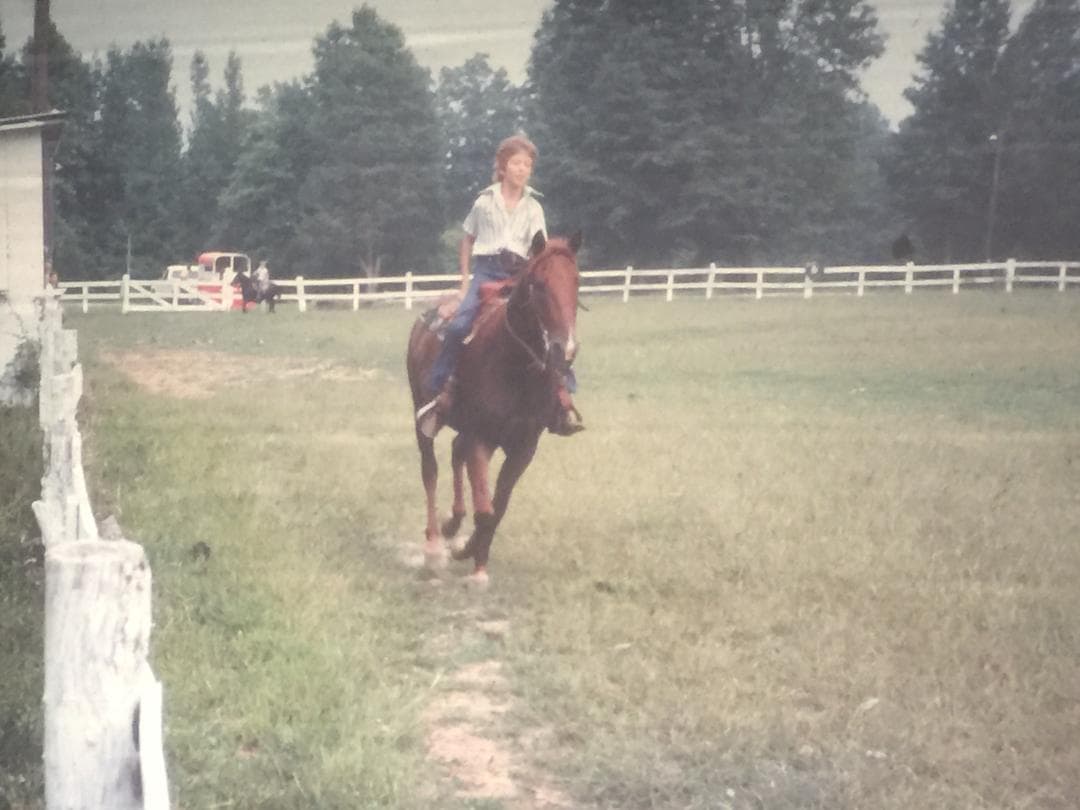 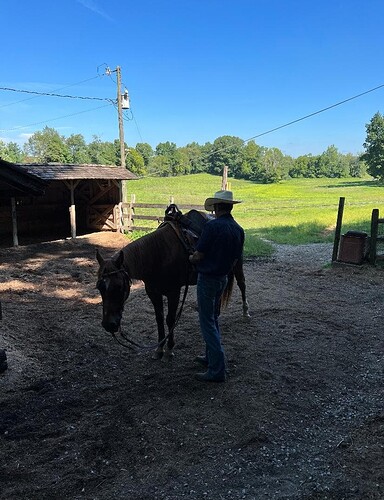 Yes, you were blessed, me too. Dad didn’t ride, but loved the whole idea of being a cowboy. We went to two dude ranches when I was little, 4 (wasn’t allowed to ride there due to age) and 6. Mom and I took lessons after that, and she rode till she was 80 (jumped till she was bout 78). She and I went to two more after dad died.

I love the pics; you can see your joy. Especially the last one, your text with it kinda choked me up.

Thank you all for sharing!

From reading your past posts, I certainly see similarities in our families - even down to being proud owners of Breyer horses. We, too, went to one guest ranch, C Lazy U in Granby, CO, which was one of the best vacations ever. Dad stopped trail riding at 87, but he still reads Cowboys & Indians magazine every month. His current crusade is pushing my sister and me to take the mule ride to Phantom Ranch in the Grand Canyon. We’ve been talking about it for two years. Just haven’t been able to coordinate our schedules. So, you can see, I had no choice. Either become a turquoise person or get booted out of the family.

uh…“far from Indian Country”? you might want to re-think that.
maybe start with the carlisle school?

@newpawn Interesting and accurate point, but those self-contained situations didn’t impact public awareness, I don’t think. At least in my East Coast experience.

So I had never heard of Carlisle school till now (but am familiar with the boarding schools). But I believe I know what @Stracci meant, far from the west where most of our jewelry comes from.

from the 1st few lines:

Opened in 1879 in Pennsylvania, the Carlisle Indian Industrial School was the first government-run boarding school for Native Americans. Civil War veteran Lt. Col. Richard Henry Pratt spearheaded the effort to create an off-reservation boarding school with the goal of forced assimilation. The Army transferred Carlisle Barracks, a military post not in regular use, to the Bureau of Indian Affairs for use as a boarding school.

Students were forced to cut their hair, change their names, stop speaking their Native languages, convert to Christianity, and endure harsh discipline including corporal punishment and solitary confinement. This approach was ultimately used by hundreds of other Native American boarding schools, some operated by the government and many more operated by churches.

The one we went to when I was 6, White Grass Ranch, was right on Grand Teton park property. The park had bought them out, and we were there one of their last years. Because of this it was slightly run down, but the place was amazing. That was where I got my first taste of riding, and it was the trip where dad bought his snake buckle. Yes, our background seems similar, although I never actually owned a horse!

I hope you get to ride the mules down! My hubby is not a horse (or mule) person, but we did hike to the bottom and camped at Phantom Ranch Lodge years ago. My mom rode them down on her train trip west back in the 40’s. We had a pic but I cannot find it.

If @Val1969 is reading this thread, I’m really curious how you became a turquoise person; I believe you said you are in France?

I think that the point of the Carlisle Indian School being in Carlisle was that it was so far from Indian Country. The physical distance from their families being one of the goals of forced assimilation. For anyone interested in the topic, the Heard museum has an excellent permanent exhibit on Indian boarding schools called “Away From Home.” Really gut-wrenching.

@Ziacat, if they didn’t let you ride at 4 you went to the wrong dude ranch! My family went to a dude ranch vacation this past summer with my 4 yo son. Finding a ranch with a great kids program was a priority and this one did not disappoint! They start them at three and call the youngest group of kiddos the “buckaroos”. It’s adorable, and my son had a great time.

I clearly went to the wrong one!

But maybe I complained about it so much we went to another!

@newpawn
Growing up in PA, I had never heard of the Carlisle Indian school until I was an adult.
My mother-in-law was from the Isleta tribe here in NM. She and all her brothers and sisters went to the Santa Fe Indian school.
She never spoke of it much, so I don’t know what her experience there was like.

did you catch the part about the 6,000 missing children?

that place was my first “wait a minute” thought but was followed by the iroquois confederacy just up the trail(& back in time) in new york,all the groups calling the area home… & of course the entire continent. there’s way more than just the plains & sw people.

You are correct about more than just western native peoples. I mentioned that it was as much my exposure to northern native art as my western experience. However, the jewelry on this site mostly is related to the southwest, so that’s why that area has been referred to so much.

Of course you are right, @newpawn. I was just referring to my experience growing up in PA.

I’m adding some pics to the post, partly because I’ve been home all day due to the snowstorm, and hubby’s working, and there are only so many things on my to do list I wanna do (ice rink closes in snow but those trucks gotta be made). 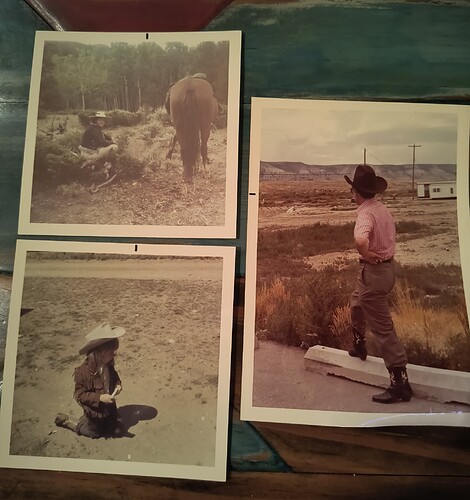 Great pics! Your father’s boots are awesome. No doubt he had a cowboy’s heart. Love your mother’s hat, too! My sister and I still have our childhood fringe jackets. Our son and daughter wore them when they were little. Still diggin’ your dad’s boots!

hello @Ziacat since child I must have been attracted to the american indians. I dreamed that I was being kidnapped by them and that I was marrying one of them! I have also loved turquoises since childhood. The belts with turquoises as well as the bracelets with turquoises attracted me a lot. I don’t know your beliefs but this attraction is really visceral and I could have lived in a tribe in another life! I first fell in love with a bracelet with turquoise, coral and bear claw from a lover of Native Americans who participate in Pow-wow. It’s been two years and since then I’ve been on the lookout to find wonderful things at a reasonable price!

Thanks for sharing! I was really curious to hear from someone across the Atlantic. Native American jewelry is amazing and touches our hearts. I’ve never been overseas, but (as I mentioned before in another thread), my husband’s great great grandparents on both sides came here from France. Closest I have been is Quebec, Canada

Now you are probably addicted to turquoise like the rest of us!

When I was little we used to attend some pow wows in Ontario, Canada. I don’t remember it (I was 3), but my brother said one time the native dancers pulled me in with them!

His current crusade is pushing my sister and me to take the mule ride to Phantom Ranch in the Grand Canyon. We’ve been talking about it for two years. Just haven’t been able to coordinate our schedules. 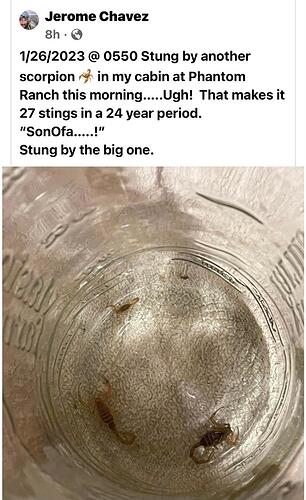