Why are we turquoise people?

While my husband is off playing some poker, I’ve got time to just chill. Maybe the passing of my brother awhile ago makes me a bit nostalgic, but I find myself thinking about past travels (he and I shared a passion for travel, maps, and the National Parks). That, along with inheriting some items from my parents, is what drew me to love Native American jewelry. We went out west a couple times when I was young, but spent most of our vacations in Canada and northern MI. So I think what tipped the scales was a number of trips to NM and AZ in the late 80’s/early 90’s with a couple good friends. I fell in love with the desert southwest (although I don’t think enough to ever leave my beloved Great Lakes). For me, my Native jewelry has an emotional tie to all the places it was purchased. I believe this Hopi cuff (by Eddison Wadsworth Soohafya) that I bought in Santa Fe in 1990 is one of the first Native pieces I purchased (it’s on an Inuit soapstone seal from Ontario I inherited from my mom). 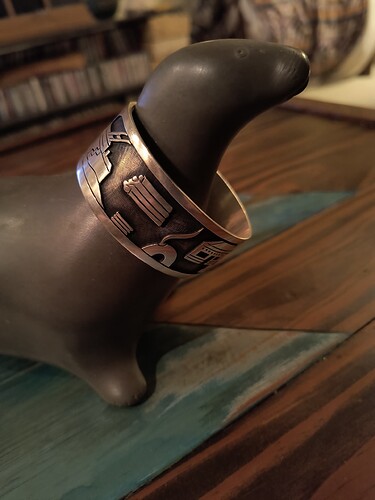 So my questions for you all (if you want to share) are …first, what drew you to this art and, second, what was one of your first purchases?

What a great bracelet and figurine, Z!

My interest in all things Southwest started in childhood, I think specifically with my introduction to kachinas by way of a coloring book. I was absolutely riveted by the weirdness of kachina figures to my uneducated eye, and I colored them in neon colors. I think someone also must have given me one or two Route 66 little souvenir kachina dolls. Mine was the era of TV and movie cowboys and Westerns, including our local TV station in a major East Coast city (yoo hoo @OrbitOrange, fyi) that had a “cowgirl” and an Indian chief (he actually was Indian) hosting the Popeye cartoons broadcast. I had to get a red cowgirl hat to look like my TV heroine (I saw her in black and white but the hats of that era were red). We were inundated with these images, and even on the East Coast there were so-called trading posts not far off the state route highways filled with cheap dolls and teepees and totem poles (mishmash)…which I adored.

In terms of jewelry as an adult, it’s an offshoot of my general interest in Pueblo people, and I could not wait to get out to the Four Corners. So I started that journey.

Enjoyable reads from both of you.

(maybe Popeye and a black and white TV were a tipoff?

Thank you for posting! So fun, love it. I didn’t have a red hat (a red cowboy hat would be awesome, just sayin’), but we have old pictures of me in a little cowboy hat and boots, and best of all, a fringed suede jacket. I felt pretty cool when I wore all that.

After I read your post I started thinking a bit more. We had a lot of contact with Native American art in those Canadian travels. We used to go to western Ontario when I was really little, and my dad would go on fishing trips with Native American guides. I remember two names, Ernie Pine and Bob Red Sky. And every year we stopped at this kitchy cool Trading Post/shop in St Ignace right across the Mackinac Bridge. I checked this past fall when we were up there, and it’s still there!

I grew up in Pennsylvania, far from Indian Country.
But my Mom and Dad always loved Southwestern and Native American art and jewelry. Back in the 70’s, Mom was a fashionista, and she rocked the turquoise.

Dad loved it too, and he has a watch cuff and ring by Effie Calavaza. He also has bolo ties, belt buckles, etc. by other artists. It’s fun to see old photos of them from the 70’s, where they are both wearing turquoise.
Now that I live in the heart of the Southwest, I’m thrilled to be surrounded by Native art every day.

Thanks for posting! I’m glad you have pics of them wearing their stuff. I could only find one picture of my mom wearing her turquoise buckle, and a few of my dad wearing his boots and hat. But they have both passed, so I wish I had more.

I think you said you live in Albuquerque. That is one of my favorite cities to visit. Possible I’ll get back out there this summer to visit one of my nephews, but not sure. Hopefully soon anyway!

And every year we stopped at this kitchy cool Trading Post/shop in St Ignace right across the Mackinac Bridge. I checked this past fall when we were up there, and it’s still there!

What are the odds! 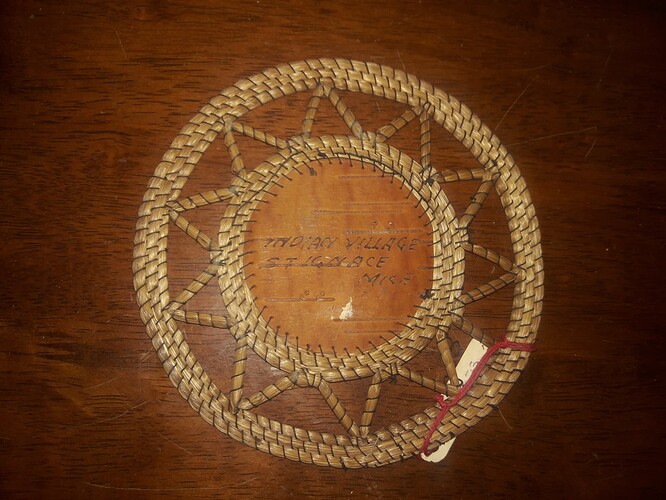 No freakin’ way!! What is it, a little wall hanging? I love it! Did you buy it there?

No, But my late wife’s aunt and grand uncle did in the 80’s. When I found this piece in the collection with the name on it, I looked it up and found the same pic you showed. It’ on my bucket list now!

I’m so glad you posted; so many memories for me. If you’ve never been in that area, you’ll love it. And if you can, you should take the ferry over to Mackinac Island. Fun fact, Mackinaw City and Mackinac Island are both pronounced with the “aw” sound. St Ignace is across the wonderful Mackinac Bridge (also “aw”). There is debate about exact meaning of the word, but definitely Ojibwa in origin.

This is the front. It looks like it had a little flower on it at one time, that’s what it looked like the first time I ever saw it so I’m not sure what happened to it. I can’t imagine that they would have bought it like that so I tend to think it happened in their possession. The tag says it was the 103rd thing bought in 1984 that was made of fiber, thus F84-103, There would have been an F84 notebook with a page 103 pertaining to this piece…all that documentation was lost! 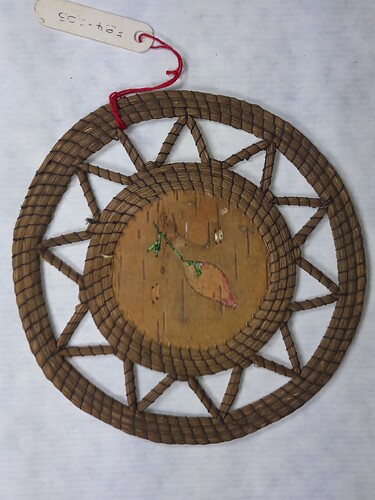 Seriously…Mackinac is pronounced Mackinaw too?

As a child, we had Snowbird neighbors. They spent summers at their cabin on the lake, next door to us. Winters were in the Phoenix area.
They were rockhounds and loved Turquoise and silver jewelry.
They passed this love on to me.

Later, I would buy what turquoise jewelry I could afford at the flea market about 20 miles from our place.
In the 1980’s I worked on the Navajo Reservation. It was there that I learned how to make turquoise, coral and silver jewelry.
I was also able to purchase a few rings and bracelets.

I just love almost everything Turquoise, It brings a sense of calmness.
I still purchase and wear what I can afford. Still make some items.
My avatar is a ring I made in the 1980’s. I wear it all of the time.

I love the look of vintage turquoise and silver jewelry.

Now that’s some SERIOUS collecting! Did it look like the flower was stitched in some kind of straw, or possibly quills?

Yes, ALL is pronounced MackiNAW. The fudge, the bridge, city, island, lighthouse, forts, etc, etc. So if you go, that’s how you can sound like you’re a regular😆 Another fun fact - Mackinac fudge is truly a thing started there; it’s made by spreading the fudge allllll over a big warm marble table top and then it’s pushed around and folded with a paddle until it’s a loaf shape. Hungry now?

Thanks for posting! Amazing you got to work there. Did you say on here you were near Chinle? I’m loving hearing people’s stories. And I love your ring!

You said the magic words…cabin on the lake…

Yes, lived in Chinle and also worked there.

Did it look like the flower was stitched in some kind of straw, or possibly quills?

I’ve never really looked closely actually. I thought it was a fibrous material but I just looked and I believe you are right, it’s quills that have been eaten away, still seems to have some poop left from what ever insect it was that ate them too! Lol. The holes around the leaf/flower bud don’t go all the way through the material although some of the other ones do. I tried to get a better picture you can enlarge. Thanks for pointing that out. 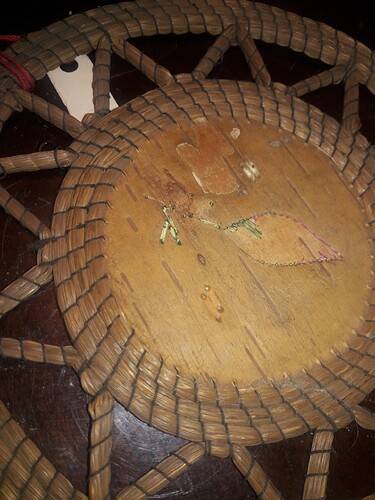 Maybe it was quill, I can’t tell. Too bad it got munched on. Check this out.

That’s more than I had before! Thank you!

I cannot remember not being enamored by NA jewelry and art. My dad’s parents were mountain climbers, skiers and rockhounds from waaay back, so I think all of us granddaughters were introduced so early that we just assumed it was normal to love it all.