Anyone heard of Bisbee Bob?

Someone on another forum mentioned Bisbee Bob, but didn’t know who he was. Someone else said he was Navajo, but not from Bisbee. A third person said he was an Anglo turquoise miner. Needless to say, I’m a little confused. Does anyone know who Bisbee Bob really is?

The above question was originally asked by a woman who has a ring stamped Bisbee Bob and wants to know about the maker. I don’t have a pic of the ring in question (it’s not mine) but it was a pretty, well made piece with a very pretty blue turquoise stone. I will pass on any info. about Bisbee Bob to the lady who owns the ring, I’m sure she’ll appreciate it.

Thanks again and best wishes,

I did a google search for Bisbee Bob and came across several pieces with his hallmark. None of his pieces seemed to have anything to do with Bisbee, and all of them looked like Navajo silver work. I had never heard of this name before, but did look up the last name and we do have some Bobs in our database. Sorry I couldn’t be more help.

Thanks, that’s OK, I couldn’t find much either, except a few photos of jewelry items which do look NA made. I’ll pass this info. on to the lady with the ring, I’m sure she’ll appreciate it.

Some information from a man who wrote me on ebay…FYI you are a little off on your Bisbee Bob facts. Bob Matthews is the miner not the Jeweler. Bisbee Bob the jeweler was Robert Bradberry … His original shop was located in the Bisbee Grand Hotel. Later on he was located at two different addresses. He was convicted on drug chargers and served time. Later on he was arrested by the FBI who claimed he had illegally obtained Turquoise from the Lavender Pit mine. Turquois was seized from his shop. Charges were dropped but turquois was not returned. And that was the end of his days in Bisbee… You can verify this info on the net and with local newspaper archives. What I am not certain of is when he created the Anisazi Pottery pieces. I believe they were done in the mid to late 70’s. To my knowledge in the 60’s he was doing modern jewlery and Indian type jewlery. It was not until the 70’s that he started doing his signature pottery pieces. As to information on Him there use to be a website with Archival news in AZ. FYI he died in TX 2009

I’m probably a little late for this response but I grew up across the the street from Bisbee Bob and his sons. He’s a very storied character to say the least. He came out with his pottery line in the late 80’s. He was one of a kind and always had a hustle going on. As the previous poster pointed out, he has since passed.

Yup, knew him quite well when I was a teenager back in the 70s. . . he was a regular white guy back but did indeed tell the world that he was Navajo to sell his jewelry. He hailed from an upscale family in upper New York. He taught me to make crappy jewelry and we would spend the weekend selling to the the tourists in Tombstone. My mom owned The Copper Queen Hotel and kept in touch with him for years until his death. He lived a very hard life. I still have the ring he presented to her when he asked for my hand in marriage (I was 15 and he was 30!!!). Most of the turquoise he used was Bisbee Blue so your friend should hang onto it. Bob was a hard core addict and my mom helped him to stay clean for long periods of time. He has 5 kids and died from a heart attack in early 2000s.

So your mom was Marcia Hutchinson? If so it’s a small world. I worked at the Copper Queen Hotel for a while in the 70’s. Back when Bob had his spider monkey, do you remember that? 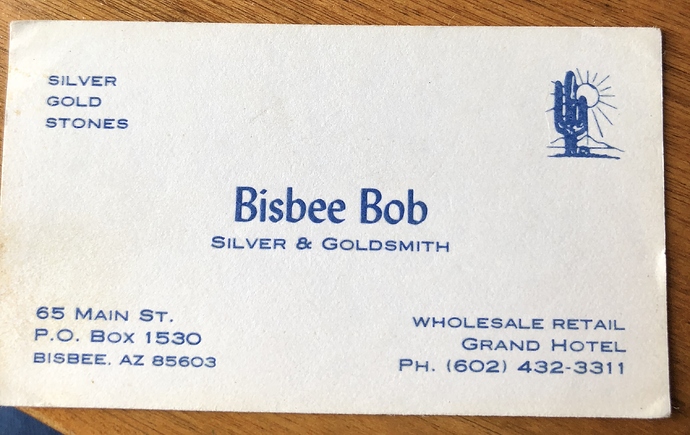 I have one of his old calling cards from 1980

I also knew Bisbee Bob, Bob Bradbery… very well, he lived up in Tombstone Canyon. I lived there in the early 70’s and worked for Marcia and Steve Hutchinson at the Cooper Queen. My first tip from him was a bracelet. I have a couple of pieces of jewelry he made me and they are the rare Bisbee Blue. He did mine the Lavender Pit. He was a colorful man of many tapestries…he did have a turquoise front tooth, a cap that fit over his natural tooth. The squirrel monkey was Tanya Turquoise and was also usually dressed in a new born baby dress & her turquoise jewls. She had a huge enclosure on the outside of Bobs home where she greeted the school kids after school.

Bisbee Bob passed over in 2009 and was living in Texas at the time.

I got ones of his rings 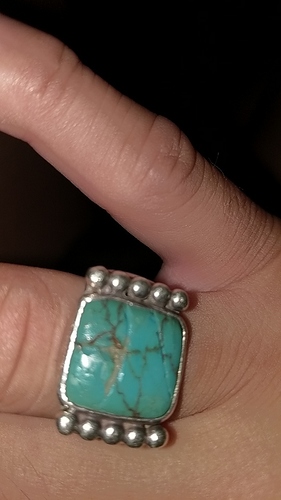 I just happened to stumble onto this forum posts trying to find anything out about a ring with the guys name on the back call Bisbee Bob so I’m very happy to see that many of you on this posting actually know or knew or have heard of Garner in Bisbee Bob I am including a picture of the ring and the underside minutes are stamped busy Bob I’m wondering if anyone can tell me whether or not this is the very rare blue turquoise Bisby turquoise never seen turquoise this color before let me Know what you think. 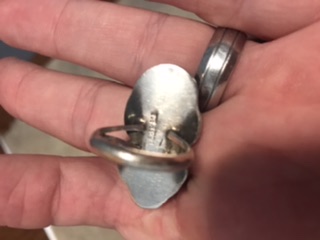 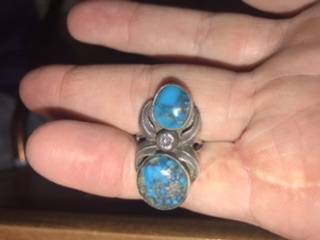 Welcome to the forum Crazyski69. That is a really striking blue color. I don’t get a good close up, maybe try uploading a bigger picture.

Here is a bigger picture 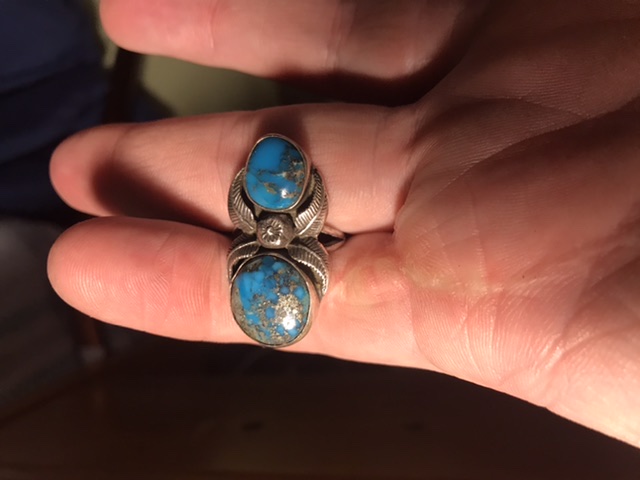 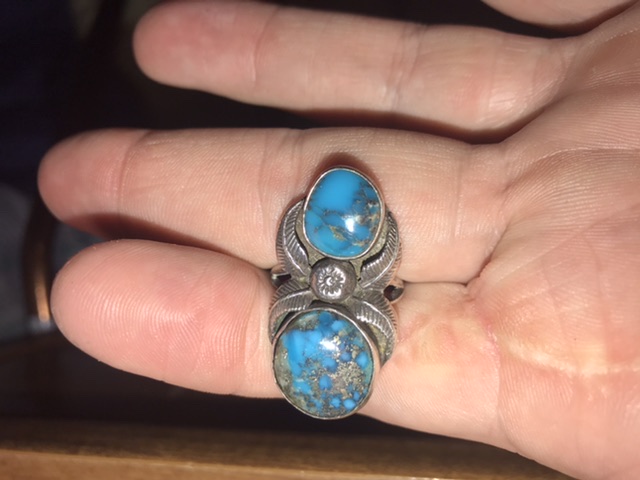 1972 had a 100 year old house on moon canyon drive in bisbee. married behind the house on laundry hill. reception was at the copper queen and we spent the nite. Wonderful banquet. That was my favorite place to have a cup of coffee and watch the world go by. 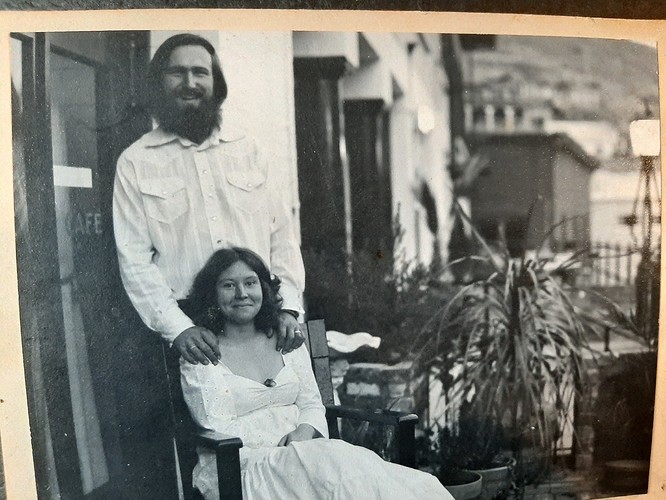 THORIN! HEY! Its MARSHALL! Are you still on this site?

Our gold shop was “raided” by fbi for a calcite mineral that we dubbed “bisbee ice”. He had made the local law enforcment angry in several disputes even though they got along with him for years. He was a good fun guy. His legal problems did him in. People liked bob because he would buy turq from the local scavengers so they could eat & have a night at the bar “the romantic wild west” lol. We did do pottery in our jewelry along side turq & campbellite. My girlfriends grandpa was rae campbell & her dad worked with bob & my mom & me. Bob married my mom in the 80s. We had several properties. He was in the copper queen then castle rock then the grand hotel & mid main st. He worked with many well known jrwelers & bisbee artists who showed him how to make jewelry. He co-owned 2 shops with friends. Bruce Mead was our good family friend & great goldsmith (certified proffessor) whos dad (colonel) paid for his school in parish TX. He has passed as well. The turq was never the problem as bisbee is sa far from normal that it had its own laws so to speak. Dont hit women & dont be a nuisance. Border town you understand. Bisbee is fantastic. So much history between bisbee (i believe the capital of arizona before phoenix?) Tombstone & the mines & mexican & indian legends such as pancho via & cochise & jeronimo. Anyway, bob was a good guy & people loved to see him everyvyear.

Hello. Bob is my dad. We had a shop in the copper queen hotel & later at castle rock & later at the grand hotel. He was a jersey boy or that area. I know he lived in la for a while. Bob bradberry. Robert bradberry. His only photo shows up from myspace. We did navajo designs because of the simplicity. Me my mom my brother all made jewelry. I made several pieces working there late 90s & ran the shop. We had several properties in the hey day & spent time with other artists that drew into the bisbee culture. After the mine shut the town fell & housing was cheap so drifters came in & took up the tourist trade back when 66 was still an american thing. Now bisbee is on tv & youtube for ghosts & masonry & mining. Among bisbee enthusiasts she has a very nice piece from another neo-wild west character. We often talked to don laughlin & went to vegas & mexico with our family & artist friends. Bob was the sort to put the jewelry in your pocket find your wallet for you & tell you about the biggest fish he never caught but people loved him & came back to see him every year.

I knew Bob in the 60’s in Santa Barbara and early 70s . He sold flowers in Isla Vista and had a dress shop there too that he gave to me when he wound up back in jail. He was a triple Scorpio and had unlimited energy which could put people off but he had a heart of gold. His real interest seemed to be engaging with people. I knew him as Ralph Schrankler. Then of course Turqouise Tooth and then Bisbee Bob. Went looking for him in Bisbee in 2009 and found that he wasn’t in favor there anymore and that he had passed in Texas. Sorry to hear that, He was a one of a kind extremely interesting person. He also taught me the basics of Silversmithing. He drove up to my house in a Van and demanded I come into his workshop in the back and showed me how to solder. The first time I met him a group of friends were getting out of federal prison and were sitting in my front porch when this guy walks up strumming a guitar and calls out my name and asks what’s happening. Being a private person , I was a little taken aback to say the least. My friends said oh that’s Ralph he was inside with us. I guess they bragged about me a bit because Ralph knew all about me.
Although he could be a pain in the rear, I was better for knowing him and am sorry he is gone.
Would love a piece of his work if that is possible.
John