Hello Can You Help Me Identify My Squash Blossom Necklace

I am so very new here! I am excited to be here. I have this pretty necklace and just need info on it. Also what’s it worth? 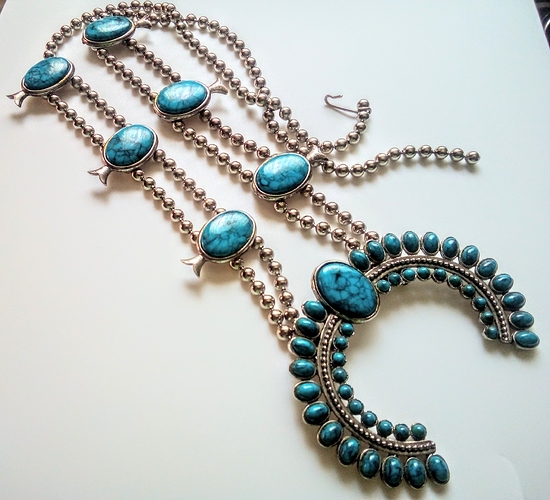 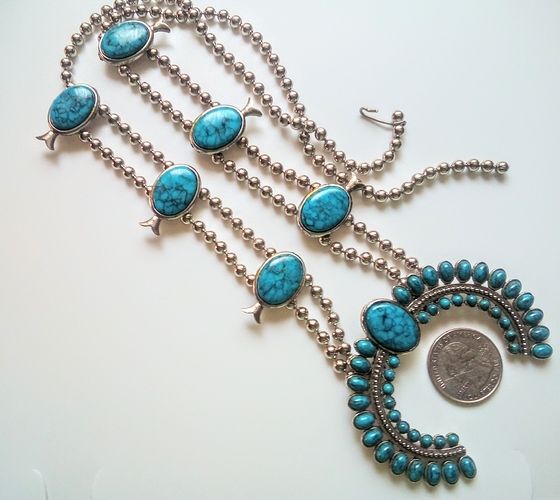 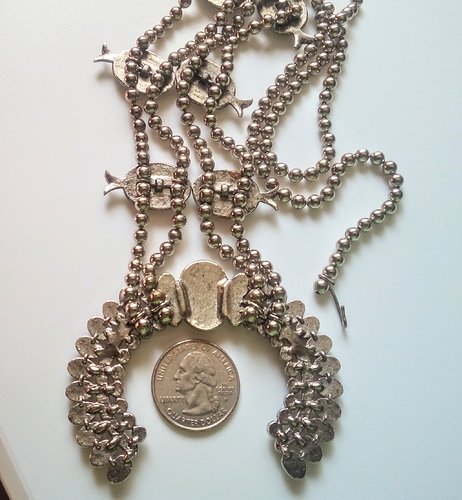 Have you tested the silver to see if it is sterling? I ask because the backs don’t look right, also is the turquoise block?

I agree with JW, you should test the metal first. It has a great, bold look, but I’m afraid it’s costume jewelry. If you look closely, you may be able to find a copyright or manufacturer’s mark.

I forgot to say Welcome to the Forum! There are a lot of amazing folks here with tons of knowledge.

I wanted to back up a bit, and talk about other things that lead me to believe this is costume other than the color and appearance of the metal. I’m not an expert, just a long time collector. The back of the piece has an almost brushed-looking finish, and the “squash blossom” stations up and down the necklace look to each be all one piece, suggesting they were molded or cast in that shape, rather than being hand made of multiple pieces of silver as is common in most Native American jewelry. In addition, the stones look to be glued in place; you can see some evidence of yellowed adhesive around some of them. A silversmith would not have assembled it in that way.

the pendant, which would be called a “Naja”, has a construction i have never seen before on the back. Typically, you wouldn’t expect a naja to be assembled of lots of tiny pieces tacked together with little metal bridges like this. The components also look to be uniformly coated or plated in white metal, so that you can’t see the seams. It also should have been made so that the strands of beads would run continuously through the back of the piece rather than in two pieces that don’t connect.

the metal beads themselves look mass produced also. you would expect handmade beads, or bench beads, on a necklace like this, which would show anywhere from a subtle to significant seam at the equator of each bead.

the turquoise is a nice blue color, but i think it is block or faux (plastic) stone, rather than turquoise mined from the ground. the overall color is 100% consistent in all the stones, which would be a very, very uncommon thing with this many natural stones. The thread- or string-like black patterning (matrix) is also a little suspicious looking for natural material.

I hate to be the bearer of bad news! It’s a fun, bold piece, and I’m hoping you didn’t pay a sterling and turquoise handmade price for it. Enjoy it for what it is, and keep collecting!

And following up on the costume jewelry aspect (this is clearly costume without silver or turq), there was quite a vogue for necklaces like this one, as purely fashion. There were companies who put these out in great numbers, like Goldette, Florenza, and Art. (If you Google using the word “faux squash blossom necklace” you’ll turn up loads of examples.)

The important thing, aside from personal taste, is that no deception takes place between seller and buyer. It’s illegal for items to be sold as authentic NA goods if they are not.

I didn’t pay the Piper

I didn’t think it was authentic… Thank you for your time and expertise. I really appreciate it.

Yes & I certainly agree. That’s the reason I am checking before I claim it to be authentic. I didn’t think that it was so I just needed to confirm that.
Thank you very much for your insight and knowledge.

No I haven’t tested. The turquoise looks too polished and not sure what ‘block’ means?

I found this chart depicting all kinds of block turquoise available to purchase. Always be aware of what you are buying! I found that gently “tapping” the stone against my teeth is a good test that I can do on site (before purchasing) without damaging the stone. Genuine turquoise will sound like glass when gently tapped against your tooth. Block will sound like plastic. It sounds like a crazy thing to do, but I promise it works! Block turquoise, sometimes called synthetic turquoise, contains no…

“block” is a term to describe synthetic turquoise (plastic) which is often sold in big bricks or ‘blocks.’