I'd appreciate some info on this ring and bracelet, please

I’d love to know who made these pieces and what the stones are and where they were mined. Any kind of value would also be great! Thank you. 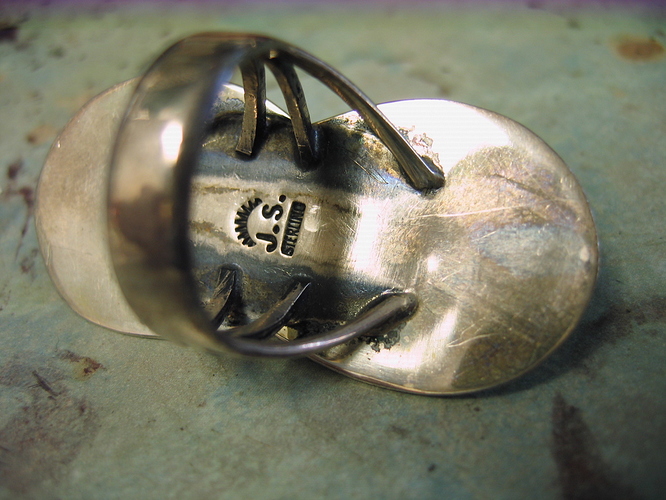 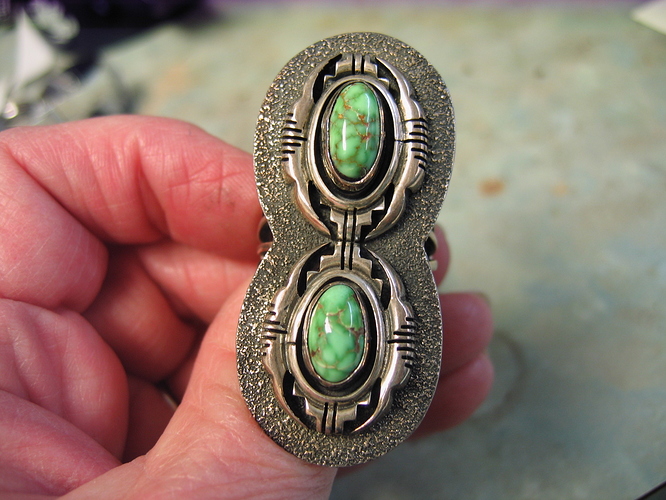 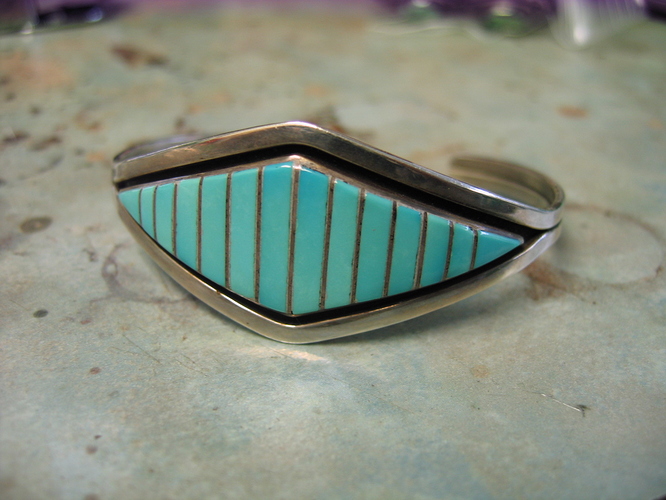 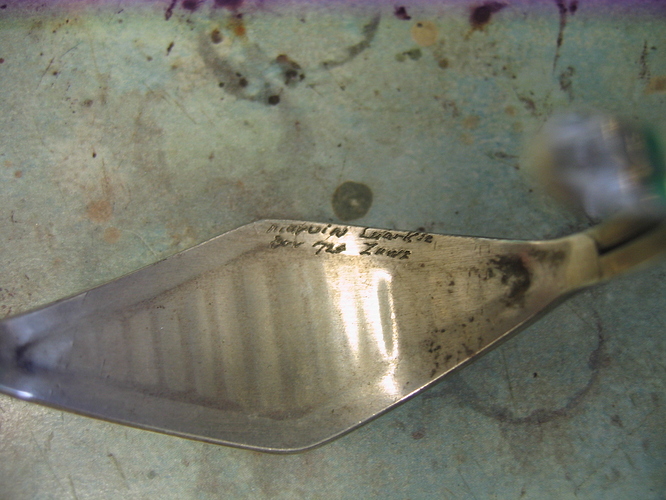 I agree with @karne about the turquoise identification. The Zuni cuff is by Marvin Luarkie

This eye-catching bracelet showcases the remarkable skill of Zuni jeweler Marvin Luarkie.  Vivid blue turquoise stones inlaid into a sterling silver setting.  Marvin’s  unique style is recognizable and will be a great addition to...

Also, I think your Carico Lake ring is by James Shay. Check out this post on the forum from a few months ago. The combination of the tufa cast base and the sawcut decorative bezel seems to match up perfectly. Beautiful Green Turquoise Ring; Need Help in Identifying Artist/Signature

Thank you both! I had come up empty. 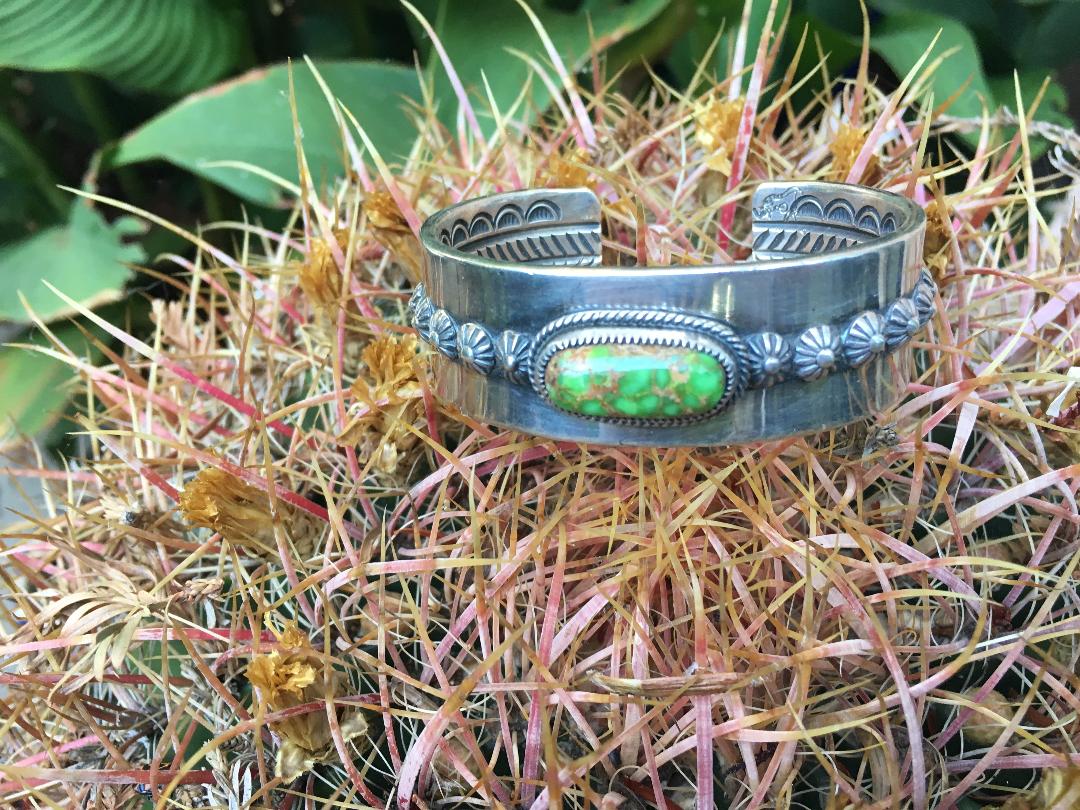 Nice find! I hadn’t heard of that stone, but I’m trying to learn.

). I don’t think the hallmark on the ring is James Shay. I’ve never seen his hallmark look like that. If course I don’t know 100 %, but I have one of his cuffs and have looked up a lot of his pieces. His mark seems to be just a JS in caps, sometimes slightly offset (no periods after the letters). Here’s a screenshot of the Amerindien site page with js hallmarks (sorry I cut off some letters). 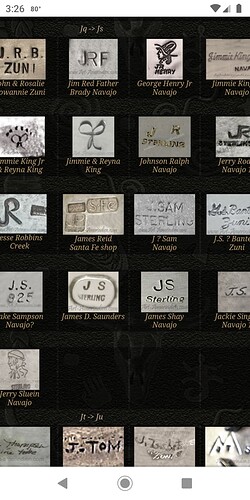 Here’s a link to another discussion we had on him.

The ring is a step cut style and looks like it was made by someone trained in that style in my workshop. Could be Jimmy Secatero, although he usually uses his full name stamp when signing his work.

That’s so funny. I was looking at the ring thinking it looked familiar. I believe quite some time ago I read a thread on here about this kind of silver work. You had added some pics of some bolos you had designed to explain how they were made. I think the style looked like this ring?

Yep. Here it is again. First piece ever made in this style by yours truly in 1987. Multi level Step Cut setting with natural Cerillos Turquoise.

The base is reticulated sterling sheet rather than tufa cast. The texture you’re seeing is created by fluxing the entire top surface, covering with silver filings and heating to just below absolute melting temp to fuse the filings to the surface of the metal.

The border elements on the ring referenced are created from two pieces of half round. The immediate surround shadowbox element is 12 half round formed around the shape of the stone and laid upright on its side. The outer piece on this ring is 8 half round wrapped flush around the first piece, and sawed with a #1 or #2 blade to create the stepped cloud designs and rain patterns.

Silversmiths originally trained in the style and producing their own variations on the design in the workshop were Bruce Morgan, Jimmy Secatero, Herbert Begaye, Eddie and Agnes Secatero (Navajo) Frank and Rita Coriz (Kewa), Austin Garcia (Kewa). We Made a lot of high end jewelry in this style for Mark Del Frate at Palms Trading in Albuquerque using matched stone sets from well known mines. Palms entered numerous sets for competition in the NM State Fair in the late 80s, took a lot of ribbons with them. I’ll post some photos of some of the pieces and sets soon.

ETA: Here is one of the sets we made for Palms Trading in Albuquerque with matched Cerrillos cabs provided by Mark Del Frate. If memory serves the silversmith was Austin Garcia, but don’t hold me to it. The set went over to Palms long ago. You can see what I mean here by each artist applying their own interpretation to the style. Apologies for the image quality. This is an iPhone snap of a photograph made about 34 years ago. 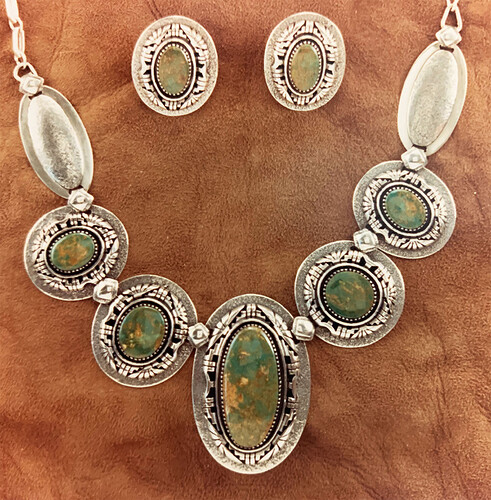