Just picked these up at an antique mall. Can anybody tell me anything about them?

Real vs fake. Can anybody give me any info on these 2 necklaces? 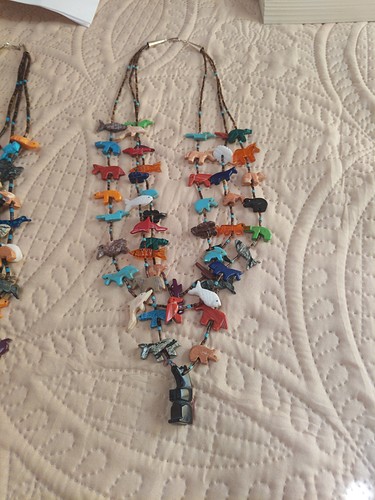 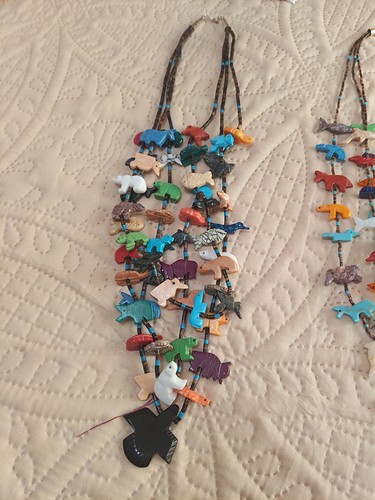 Looks like dyed, storebought beads, hard to see if any of the animals are stone vs. composite material. Hard to tell without closeups. Not Zuni, not handmade. Oddball animals like fish and dolphins and flat-surfaced ones are always a bad sign.

This necklace has several features that we look out for as warning signs when considering if a fetish necklace is imported:

Other things to look out for:

Also consider what you paid and where you bought it. Genuine Zuni fetish necklaces will run about $300 per strand and it is pretty unusual to find one at an antique store, ect. Unfortunately imports outnumber genuine necklaces by at least 10 to 1. The rules above are sometimes broken, but when you start to see multiple rules being broken, as in the necklace you posted, it almost always points to an import. I like to refer people who inquire about fetish necklaces to this thread, which has some helpful information published by The Keshi Foundation, a non-profit promoting Zuni art:

What makes a Fetish necklace valuable? Real vs. Fake

Hey guys, I found this really helpful guide from the Keshi foundation of New Mexico, a public non-profit promoting Zuni arts. “In the seventies, mass produced fetish necklaces flooded the market, suppressing sales of authentic Zuni necklaces. Fabrications were still considered by many, to be the real thing. Zuni artists continue to be harmed by the sale of imitations.” [image] If you are unable to zoom in without the text getting blurry, here it is in two separate halves and transcribed. […

I have to comment, based on my experiences living on the Navajo Nation.
When I was there, in the mid 1980’s it was common for Navajo artists to purchase fetishes from local “Indian” supply stores. Many of these were similar to what is in your necklaces. Some were from Mexico, some from Asian Countries. Some locally carved.
It was also common for artists to use shell heishi beads from the Philippines.
The cone end pieces were also common at that time.

Some artists at the time combined the shell heishi with local, Sleeping Beauty or Kingman Turquoise heishi and/or tube beads/round beads.

I knew many Navajo artists at the time who were selling necklaces similar to yours for over $200.00.

I have many beautiful fetish necklaces. Love all. Knew and worked with the Navajo artists who made some of them. My friends helped me make some, too. I have been making/selling them for years. But, according to current standards, all of my necklaces would be considered “fake”.
I am only 18% Native American, so cannot sell anything as Native American made, as that requires at least 20% Native blood. I just state they are Southwest style.
All of the necklaces my friends made would be considered “fake” by some here.

I think this should be a separate thread because it goes beyond these fetish necklaces, in case you’d like to post one. I have a lot of thoughts on the subject but will say here only:

In terms of the inclusion of imported, non-Native or commercially manufactured elements, the laws apply and many collectors do care–again, maybe for a separate thread.

This is why provenance is important. We have no way to prove that they are Navajo strung necklaces otherwise. If we are purchasing fetish necklaces directly from a Navajo artisan who uses imported materials, this is good provenance. If that necklace hits the secondhand/vintage market without provenance, we have no way to prove that a native artist had any hand in making the necklace. Therefore is safer to assume (and also more likely) that it’s an imported fake

To answer @fernwood’s question, I think there’s an important distinction between things that are fully Native handmade and those that are Native assembled from pre-made or manufactured parts. There may be a place in the market for the latter but true collectors of NA art will want the former. For fetish necklaces, the artistry is in the carving of the fetishes, which is a very old Zuni art form. So a valuable and collectable fetish necklace should be hand carved, and preferably Zuni. Likewise, handmade heishe is very labor intensive to make–the art is primarily in making the beads, not assembling the necklace.

So does that make necklaces similar to those above that were strung by Natives “fake”? I honestly don’t find “real” and “fake” to be the most useful words when talking about NA jewelry. I prefer terms that are more descriptive: natural turquoise, block, hand made, mass produced, Native/Zuni/Navajo made, Anglo made, ect. The three categories I look at are materials used, whether it is hand made, and whether it is Native made. So in those terms they would be necklaces made of imported/mass produced fetishes strung with imported/mass produced pen shell heishe, using nontraditional and block materials, and Native assembled.

I have a necklace made of nugget turquoise strung on melon shell heishe that if I were to see now, without any context, I would think was a Phillipines-made import. Except that I purchased it from a Santo Domingo women at a roadside stand who told me she made it. Now I believe it is probably something she assembled with purchased materials and manufactured heishe. At this point I wouldn’t buy that necklace for my collection and would look for a traditionally handmade alternative, but I just enjoy that necklace for what it is and know that I helped at least one Native person when I bought it.

EDIT
@OrbitOrange’s comment about the heishe necklace resonates: What we get at the early stage of the learning curve can be very different from what we seek out after we know more.

And I edited mine.