Is Matthew Jack a real person and are his pieces legitimate? His pieces online appear in only one gallery that is going out of business. Very confusing

Do you have a picture of one of the pieces that you could post?

No, but google Tumbleweeds Jewelry and there you can see some pieces

I’ve seen this debated before in other forums and it’s never been answered to my satisfaction. He is supposedly related to Ray Jack, who also worked in microinlay and is apparantly relatively recently deceased. But there’s confusion about Ray Jack as well. Matthew is not in Hougart’s and his jewelry doesn’t seem to be represented in established galleries. And I always have a very high index of suspicion when it comes to microinlay. I’d love to know the answer. Maybe @Jason knows.

Sorry I don’t know if either is a real person, never have dealt with anyone this name. I looked up Tumbleweeds Jewelry and found a Ray Jack piece, didn’t find a piece by Matthew on the website. Tony who worked a Ray Jack back in the 1980s said he did silver work and then someone else would inlay the work, common in shop work. Says he is still alive and making jewelry. Nothing gives the Matthew Jack pieces on an internet search away as being imported.

I have read in several different forums that Ray Jack has recently passed away. Sure wish someone could confirm something about Matthew Jack

When Tumbleweeds carried more of Matthew Jack attributed pieces there was a photo of a young man included when perusing the added photos when you detailed on an item. (It also looks like Tumbleweeds is closing up shop)

I’ve seen other pieces where he’s done the inlay but someone else has done the silver work and used their hallmark (Elouise Kee?) - googling Matthew Jack brings up pieces here PrestoMart: Search results
and on eBay: 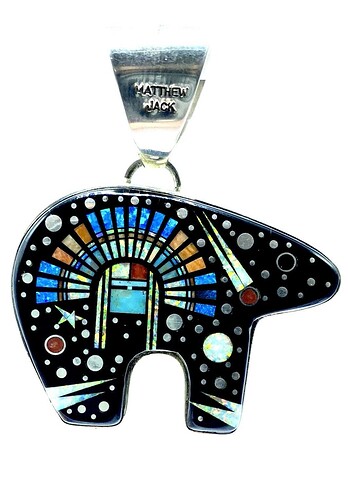 …and there are 3 hallmarks attributed 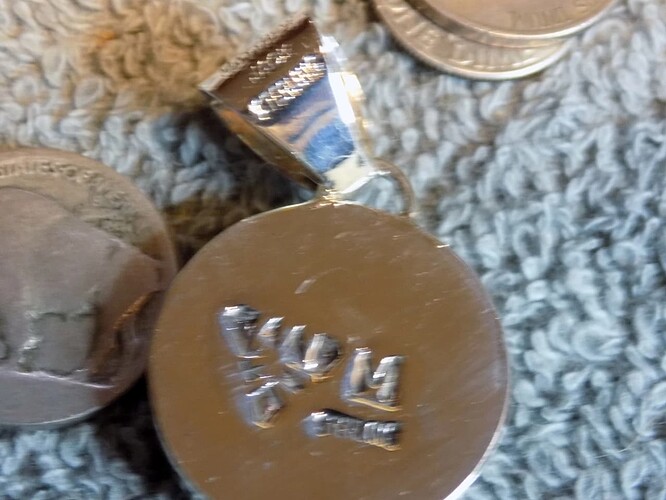 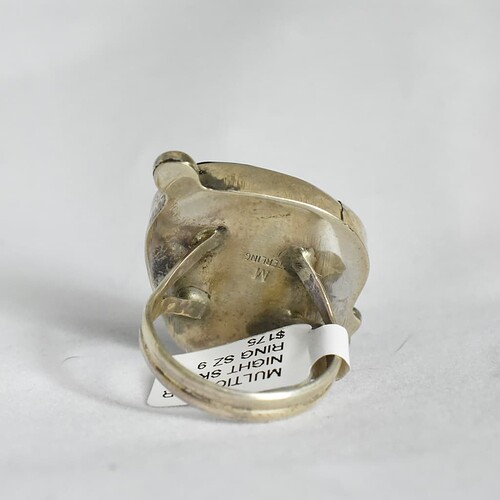 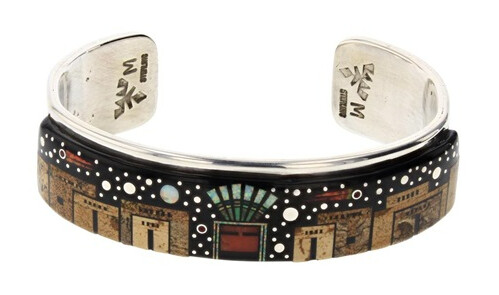 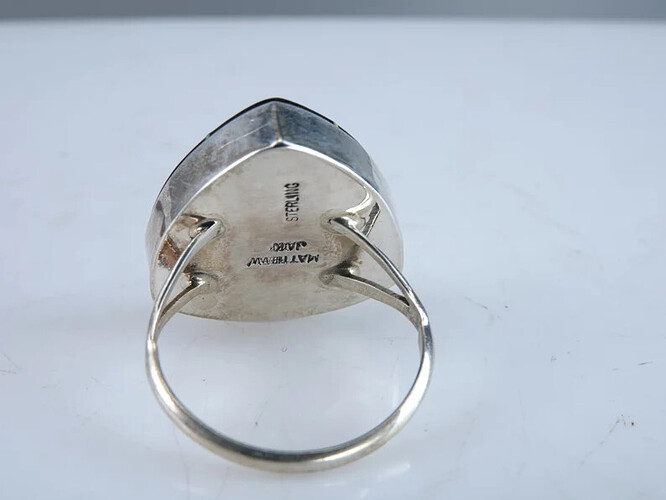 cuff, No. 8 Mine turquoise, Matthew Jack

The PrestoMart presence raises questions about authenticity more than answering the question. The link goes to a bunch of counterfeit Louis Vuitton goods; a ton more obvious replica merch is listed as well. They are illegal to sell.

Caveat emptor for micro inlay if your dealer is a question mark in any regard.

I also think three hallmarks is a BIG redflag. I am not interested in buying any thing just want to settle some controversy

I have a Matthew Jack piece…very nice work and looks legit. I found enough online about him and his work that made me feel like it/he is the real deal.

My hallmark looks like the fourth one above; I’ll have to get a picture later. 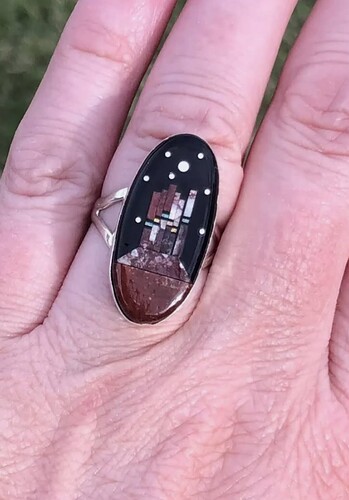 Maybe having three hallmarks is a red flag, IDK. Tommy Singer has seven, count 'em, seven, on the Amerindien website (not counting the fake ones).

I just realized I have a sandcast & Turquoise Concho belt with M. Jack etched on the back

I only have a couple of inlay pieces, a heart brooch by B. Piaso, Jr and a pair of earrings by Clarence Chama (RIP), Navajo (not the Santo Domingo artist). 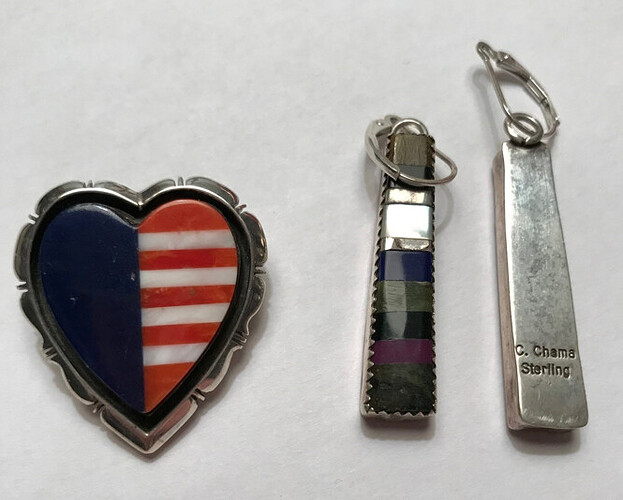 The pieces referenced earlier in the thread aren’t Native jewelry.

I have done my homework and that is why I asked if ANYONE could verify Matthew Jack as a real person.

It’ll never happen.The really meaningful story is how and from whom these myths are intentionally generated. Who’s behind them, and where the money goes.

@mmrogers I think you responded to the wrong member (in that reply to @OrbitOrange)–right?

Thank you for clarifying, Chickfarmer… My response was not to Orbit Orange, but generally with regard to the Jewelry posted earlier in this thread. I’m familiar with the Jewelry, its Near Eastern, and Far Eastern origins, its manufacturing contractors, and personally aquatinted (at one point or another over the last 50 years) with many of the nefarious individuals responsible for its offshore manufacture, distribution, and the deliberate origin myths (outright lies) employed to market it.

It’s really not enough to distribute unsolicited knowledge out of hand. Most of the individuals on this forum are from an entirely different generation than I, are very internet savvy, and have amazing skills at sleuthing out everything from incredible bargains, to detailed histories on things tucked away in the far, far corners of the internet.

I see a lot of really great authentic stuff on this forum, and it’s awesome that so many are so into the industry and craft that I literally grew up with and made a living in for decades. There is no more quintessentially American industry than the American Indian Arts and crafts industry.

Plainly said, in the general sense, the legitimate industry has been hopelessly corrupted, and in all honesty fundamentally destroyed. Native craftsmen and Native craftswomen largely completely displaced by offshore production which masquerades as authentic Native handcrafts throughout the US.

There are exceptions, holdouts, like Perry Null Trading, and many of the old Mormon trading families. God bless them all. Were it not for their support for traditional Native American Arts and Crafts, literally nothing being made today would be authentic.

Fight back! Go into the phony stores, Ask about origin. Document what is being said and sold. Where possible, buy what verifiable contemporary Native craftsmen are designing and producing, and report fraud wherever you encounter it.

Do your homework. Research the true origins of what you are seeing in the stores and be vocal about your findings. Wear your Indian Jewelry proudly. You are the future, and it’s up to you to ensure the traditions survive and thrive

Huzzah! I knew it wasn’t for OO–she’s very savvy and a great asset here.

The problem of fraudsters in the trade is a huge one, but also not new: there’s been lots of coverage, if people take any time whatsoever to read about the field. What gets to me is when people who claim to want to understand stones and NA jewelry seem to think that virtual images (online) are the whole story. No. Instead of posting a jillion random things to get random opinions on, take a minute to read the books, meet artists in real life, go to the fine shops that still are around, spend money wisely vs crapshoot–learn, in short. No substitute.

Bargains aren’t bargains if you’ve in fact been duped in this sea of fakes out there. And I hate the idea of lining the pockets of scoundrels.