My interest and appreciation for sandcast jewelry started in the 1980s when I met Harold Tregent, owner of the Glen Comfort Store in Estes Park, Colorado. Harold owned a beautiful sandcast buckle and took the time to educate me on the tedious sandcast process. His enthusiasm and depth of knowledge was contagious, which led me to being a life-long fan.

Here is an early photo of Harold’s store located in the Big Thompson Canyon. Yes, it was as charming on the inside as on the out. Sadly, after 77 years in business and five years after Harold’s death, the store was demolished in 2012 for redevelopment. 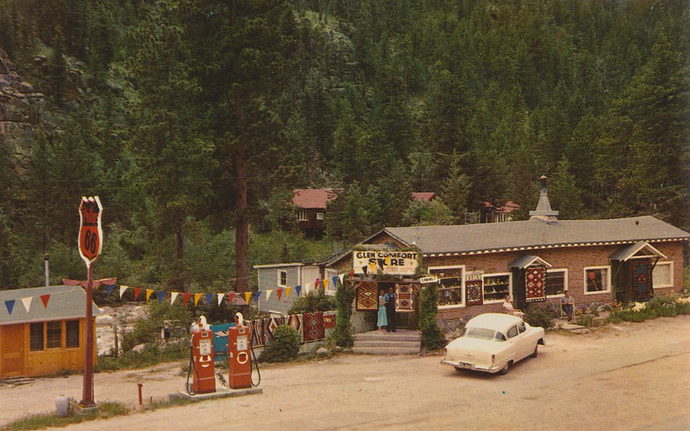 Currently, here are my only sandcast pieces, but I’m always on the hunt. 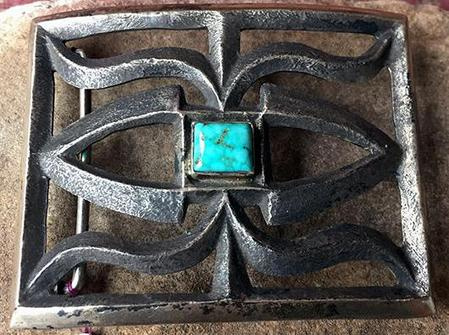 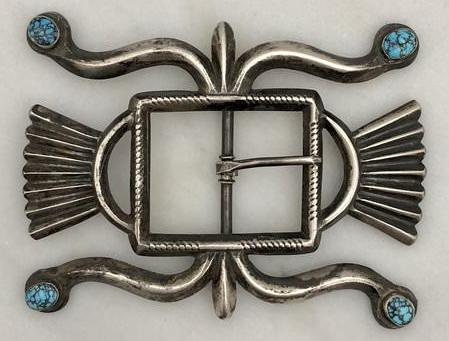 So, with that said, let’s see your sandcast jewelry!

So, with that said, let’s see your sandcast jewelry! 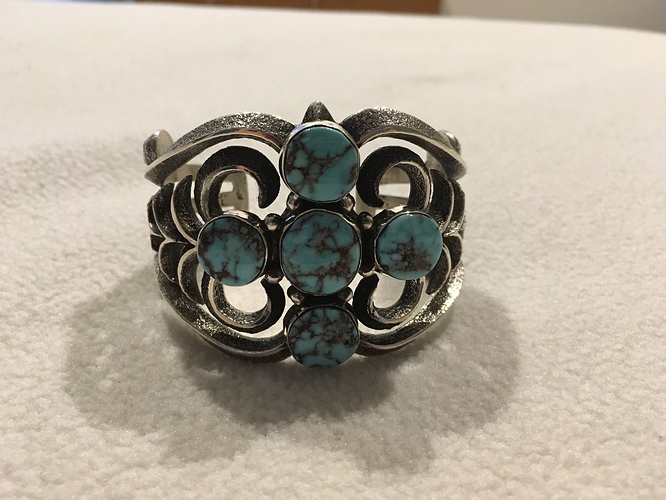 I also wanted to re-post this excellent article by @Jason, from the Perry Null online newsletter a couple of weeks ago. Thanks Jason, this article was super helpful for me! Hope its OK if I share:

You hear the terms sandcast and tufa cast used very often when referring to a technique Navajo silversmiths’ use to make jewelry. The terminology makes it very confusing to understand exactly what technique was used to make your piece of jewelry. You will find the landscape of the Four Corners filled with rock formations. Those first Navajo silversmiths figured out they could use this special rock to carve designs into and make jewelry. I don’t imagine they realized it was different, except for the white color, then the sandstone formations they would find it in. It would make sense that it would be thought of as sandstone and earn the name sandcast when turned into jewelry. It has always been tufa stone that was used by Navajo silversmiths. An actual sandstone would be much harder and most likely crack from the heat needed to make a piece of silver jewelry. Today, we see the term sandcast used frequently when we are referring to a different technique used to make silver pieces. Award-winning artists like Aaron Anderson and Darryl Dean Begay are very well known for making their jewelry using tufa carving and casting techniques. They pride themselves on original designs and in most cases only cast one piece from their carved tufa stone design. Other silversmiths make similar styles of jewelry but use a very different technique that allows them to cast one design numerous times. We often refer to this style of casting, where the same design is used over and over as sandcasting. Artists like Wilson & Carole Begay make this style of sandcast jewelry.

Remember, even if a design is used over and over that the original comes from a tufa carving. After the original is made the artist will create a lead template of the design that can be used again in a future casting. Some families have passed down these designs from generation to generation. The technique used to make these pieces over and over again is called cement casting. A tufa stone can allow for more than one casting but it will eventually become useless and the carved design will break apart. Cement casting can allow the design to be casted multiple times.

Resourceful silversmiths originally learned how to take the dust from their tufa carvings and turn it into a cement. Today, a silversmith can head down to the hardware store and purchase cement that can be used to make a cement casting mold. One of the most difficult things about being in the Native American jewelry business is finding that design that becomes popular and seems to sell again and again. That is why businesses like Fred Harvey would become so successful because they created a type of catalog for their creations. They introduced a manufacturing process to their jewelry making that could easily replicate popular designs. The same idea is used for cement casting because the Navajo silversmith learns which patterns sell the best and they can create a successful selling business with that knowledge. Basically, the process is very similar to how a cement sidewalk is made. The silversmith will create his cement and pour it into a form. Then he takes his lead template and presses it against the packed wet cement to imprint his design. After that the process becomes very similar to that of making a tufa cast piece of silver. The silver is heated into a liquid form and then poured into the cement mold. Because the cement is much smoother than a tufa carving the piece of silver that comes out doesn’t require as much cleaning. Then, it is repeated until you have the number of pieces you needed, or you run out of silver. So, if you ever wondered why a number of sandcast pieces looked so familiar you now know why. These designs have captured the style and rustic look of Navajo silver for over a century, and some of the most beautiful pieces of Navajo silver have been made this way. Of course, the silversmith can add stamping, other silver work like drops and cutouts plus a turquoise stone to give each piece a unique look. 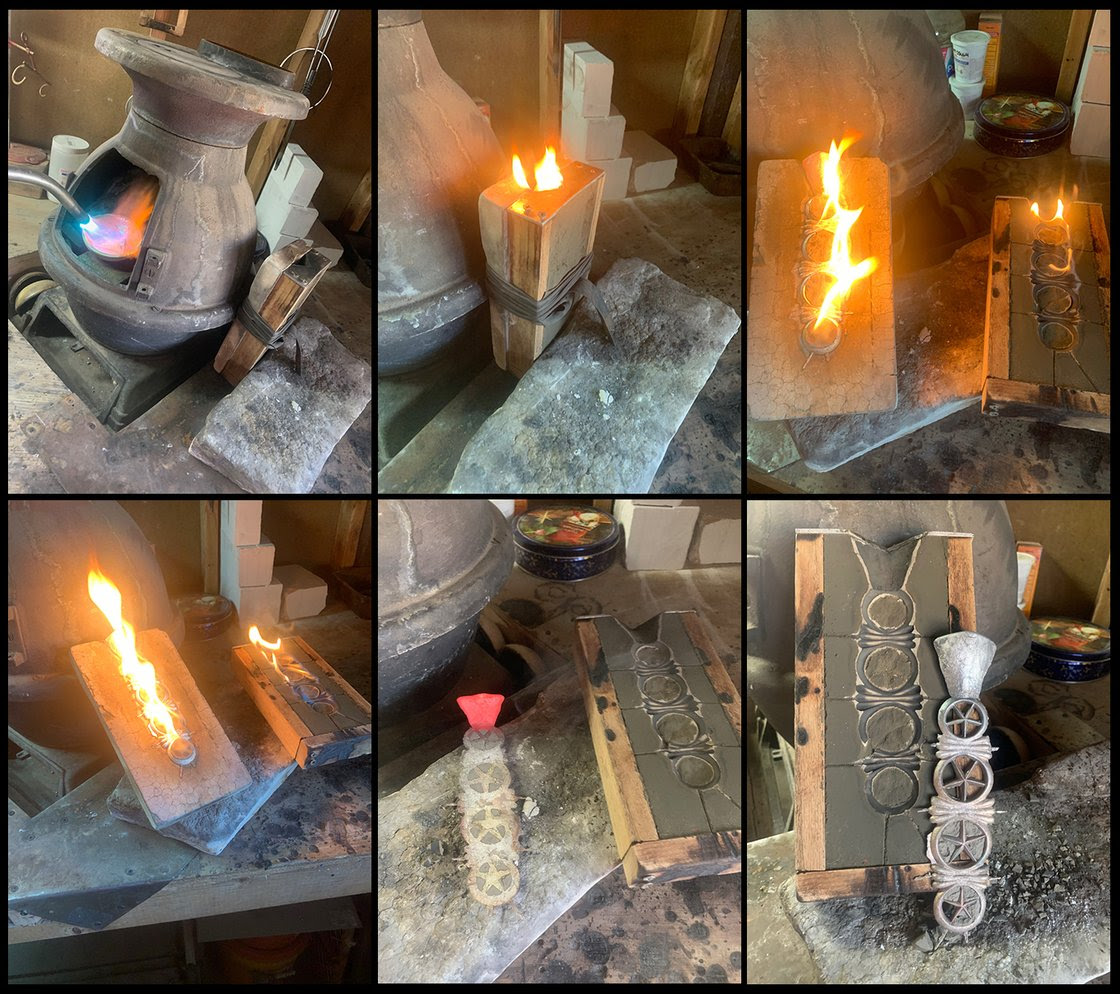 We mentioned artists like Aaron Anderson and Darryl Dean Begay previously in this article. They are a part of a number of Navajo silversmiths who are driving new designs and styles using tufa carving and casting techniques. You will definitely see a price difference between the work of an artist who is only making one casting compared to one that is making several casts of the same design. You will find that these artists covet certain tufa from different areas. Not all tufa is created equal and these top artists find those special tufa sources. A number of them will only use tufa from a certain area. Some of them talk about a special tufa only found on Hopi land that was used by world renowned Hopi artist Charles Loloma. Aaron Anderson talks about a secret source that is in a top-secret location south of Gallup. Good tufa stone will be a certain hardness that allows for a detailed carving that will not break apart and hold up during the heating process and hot pour of the silver.

This good tufa stoned is actually mined and not just sitting there on the top of the ground for easy picking. It is a very labor-intensive job and those who find good sources definitely want to keep their locations a secret. The good stone can be expensive, and it can provide a good stream of income by selling it to local supply houses and artists. Tufa stone comes in blocks and requires the artist to saw out the desired size they need for their project. A normal size bracelet would require a cut of say 10” long by 2” thick. That piece will again be cut down the center so when it comes time to pour the silver into the carved design one-half will be used as a cover. Many tufa artists will carve their name into this top piece, which will be the hallmark when it is complete. It takes a skilled artist to create a tufa design with lots of detail because it is the bottom of the carving that is the top of the bracelet, think of having to figure out the look from underneath. 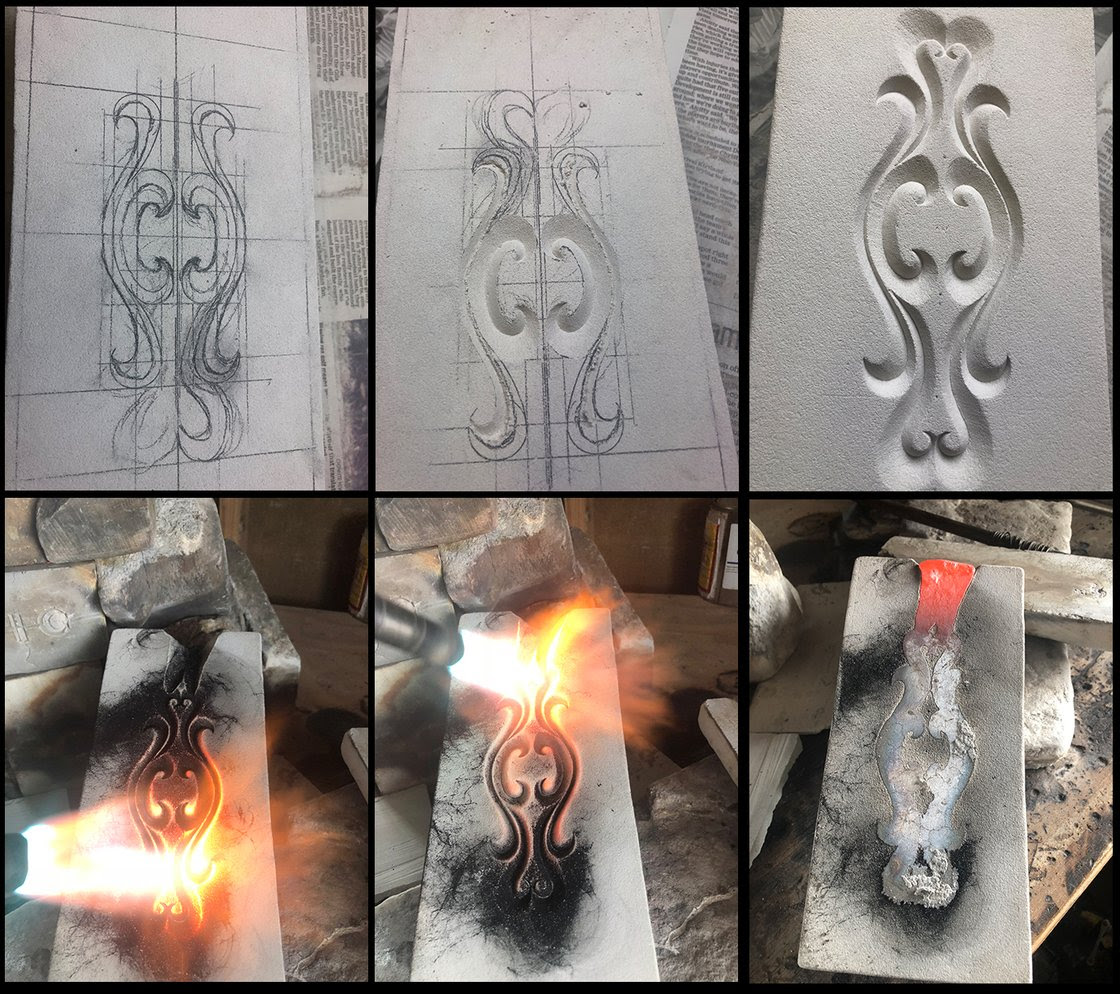 Artists create necklaces, concho belts, rings, pendants, bracelets and whatever else they can dream up using a tufa stone. It usually begins with a drawing on the stone along with lots of measuring. It is important for the piece to be centered which will translate to a centered fit. Then the artist will begin to carve into the tufa stone to make the design. This is where the tufa stone can be etched to create texture and carved at different levels for dimension. Once the design is complete and the artist wants to cast the design, they will begin to heat the tufa stone and start melting the silver. Once they get the stone at the right temperature, they will tie it to the other half of the stone, groves have been carved into the top so silver can flow in. Last, silver will be poured into the stone and immediately the silver will harden. The two stones are separated, and the silver cast piece is put into water. After that the artist will clean the piece and begin turning it into a piece of wearable art.

You didn’t just play, you called checkmate! That is a magnificent piece with super nice stones. Just what one would expect from Aaron. Thanks, I really enjoyed seeing it.

Oh, and thanks for the article!

It looks beautiful on you. I haven’t been able to find a sandcast bracelet for myself. They always seem to run large.

Thanks! This one actually is a little big on me, but I make it work