This TICKS me off

So another thread in Hopi hallmarks sent me looking them up. I have a beautiful pendant (bought at a trustworthy shop) by Manuel Hoyungowa who passed in 2011. I was reading an article about how hallmarks are being copied, especially those of deceased artists. So I was googling some of his pieces and THIS THING came up.

This is why I question so much on Etsy.

Terrible, infuriating, fraudulent. Is the article online, such that you could link it?

It is, I’ll try tomorrow. I’m not doing very well with figuring out how to link. 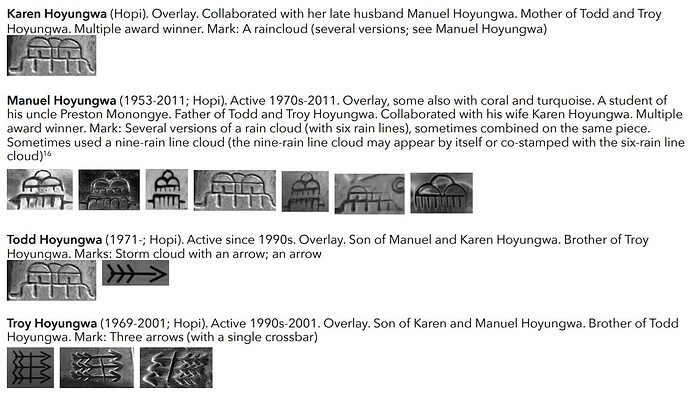 that is a common design stamp anyone can buy, Thunderbird jewelry supply sells it.

Thanks Steve for linking that; sometimes I’m decent with techie stuff, sometimes not so much.

@Khmetalwork, okay, but it’s being used often enough as a fake hallmark that the Amerindien site has it listed. And it’s certainly fake here.

I glanced through some of the other stuff on this link, and they definitely call things Native American that I’m betting aren’t.

The spelling is interesting. I just googled it quick cause I didn’t feel like pulling out my “Hopi Silver, the History and Hallmarks of Hopi Silversmithing.” So today when I looked it up in my book, they even had 2 different spellings, Hoyungwa and Hoyungva (guessing the one with the V is a misprint?). But I don’t have a recent edition.

Having been the victim of fraud once, what really stunned me was the utter, utter shamelessness of those willing to bold faced lie in order to take your money. “Buyer Beware” has never been more true.

This type of fraud is covered by the Indian Arts and Crafts Act. Here’s a link to report the fraud directly to the DoI’s IACB: Should I Report a Potential Violation? | U.S. Department of the Interior

I do. I first send the seller a message giving them the info that their description is incorrect. Sometimes they take the piece down sometimes they don’t. It’s up to you if you want to try and get Etsy to make them take it down. Etsy is pretty good about that.

I recently received a chain that I purchased from an Etsy Seller that was not as described. Cheap lobster clasp instead of a hook clasp (as was pictured) on what was supposed to be a “Handmade Navajo Chain”. Tried to contact the seller with no response. Contacted Etsy and sent pictures and my money was refunded with no comment back to me whatsoever - I only know because my account shows the refund - I don’t know who actually gave the refund, Etsy or the seller. I saw that another purchaser had the same experience and wrote about it in a review, as did I. Tried again to contact the seller to try to return the item, but still no response. Not sure what to do next. I have the chain (most likely fake) and my money has been refunded. I know this store (Zia Jewelers - oops did I say that?) is selling a lot of these chains. I’m not a big Etsy user, so don’t know all the in’s and out’s.

So irritating. I’ve never shopped on Etsy, so I have no idea either. I may go on there and leave a comment to them about the ring being fake. It just makes me mad that when you Google this wonderful Hopi artist, that piece of crap comes up. And even description of the article is bad. They have Manuel Karen like it’s one name. If they had bothered to look anything up, they would see they were husband and wife. And then it says “Anglo mother children.” What does that even mean? I could have posted it on the “which part of Native America does this whatchamacallit hail from” thread.

@Ziacat I would at least comment - at the very least. Infuriating for sure!

I emailed her. We’ll see.

Well, looky here. She took the name off, and is just calling it Native American style. And raised the price lol

This is the original.

Yeah, I’ll get right on that, unless you beat me to it

Darn. We weren’t quick enough. Now it’s back up to 110.00.
Didja notice when it was labeled as by Manuel Hoyungwa that there was only one, now it’s just a “rare” find?

I forgot my password…several attempts were made.