I originally intended to put these pictures in the show and tell section, but I am curious as to what mine the turquoise could be from, so put it in here. It’s probably my favorite piece I own, except for a couple buckles that I inherited from my parents. I saw it at Ogg’s Hogan in Prescott years ago, but didn’t pull the trigger, and then went back 3 years later and it was still there. So I decided that time I should get it, because I loved it so much. 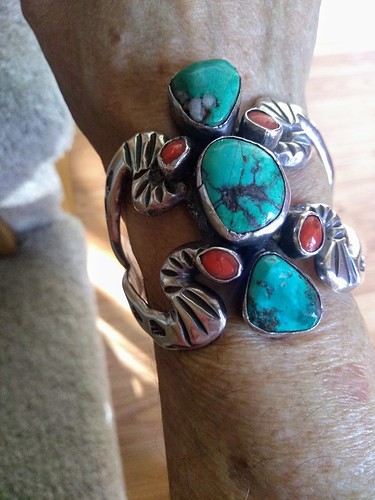 The owner Jeff said it was an older piece and the turquoise was natural, but didn’t know what mine it came from; he’d had it for quite some time. I’ve gotten more curious recently about the stones. I also asked him then if it was a Navajo made cuff because it just kind of had that look to me, and he said it might seem so, but felt it was probably Zuni because… 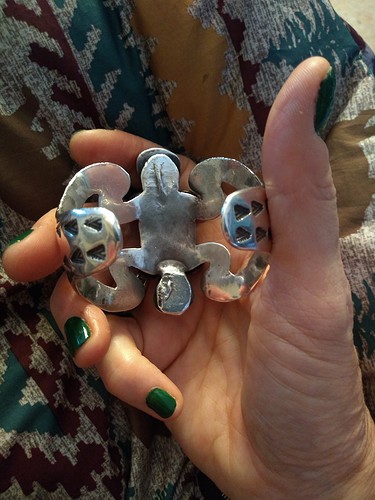 … When you turn it over it’s a frog! And that made him lean towards Zuni. I also love the sides, because they are in the shape of arrowheads. 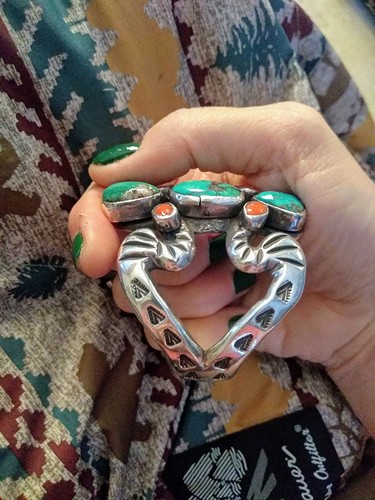 Anyway, was wondering if anyone would have any idea of what the turquoise might be. I know it’s really hard to tell, but maybe someone here would have a guess. It’s definitely greener than what it shows in the pictures - almost a mint green. But I couldn’t get it to show up like that in the photos.

This is a really cool bracelet of a type that’s around, but in much less ornate variations than this one. There’s a Navajo maker who’s been producing them, FL Begay. Steve Elmore, well known dealer (but not a jewelry guy), is of the opinion that it’s a revival style based on old Navajo, but I can’t call to mind any early Navajo silverwork that’s similar. It’s fun, and yours is without doubt a superior take on this idea. Congrats! Can’t help with the turquoise, though.

For Sale on 1stDibs - Navajo Sterling Silver sand cast cuff bracelet. Frog Motif With Bezel Turquoise stone The bracelet is not signed as it is common for older pieces from

Thank you for the information! I like all the cuffs in the links you sent. But I love it that this one doesn’t easily appear to be a frog until you turn it over. It’s a nice little surprise. Very interesting that those others are Navajo, because Jeff at Ogg’s really felt it was Zuni, but he wasn’t sure. He did believe it was an older cuff; I think he thought around the 50s, but who knows.

I saw the frog right away in yours even from the top, but only because I am familiar with similar sandcast frog designs. Yours is neat and more elaborate/less recognizable as a frog than most. And don’t you love it when you get another chance at something that you haven’t been able to get out of your mind for years?

Definitely! I was so excited when I went back and it was there. I’ve done that twice at Ogg’s. So I guess it’s a dangerous place for me!

As soon as he pointed it out to me in the store I was like, oh yeah. And I had never seen a cuff like that. I was looking at the whole thing and not really seeing the shape. Kind of like a Rorschach test maybe? But it is fun to point it out to people that don’t see it (like me!).

Jason, and anyone else, do you have any thoughts about where the turquoise in this cuff could have come from? Looks different than Kingman, but seems like Kingman is what things often end up being!

I don’t think of the stone as Kingman, definitely a little tough because of what looks like color change. My first thought was Morenci. Doesn’t have the pyrite or the blue, but I have seen Morenci that looks like this.

Thanks, turquoise is always interesting! It had a loose stone which I had fixed this past summer while I was in Albuquerque; glad I did.

I thought that looked like color change, although hasn’t changed since I have owned it.