This piece was created at the Casa Kakiki workshop in El Paso, Texas in 1975. Casa Kakiki operated for just a few years in the mid 1970’s. A rare piece of Native American history! It weighs 160 grams 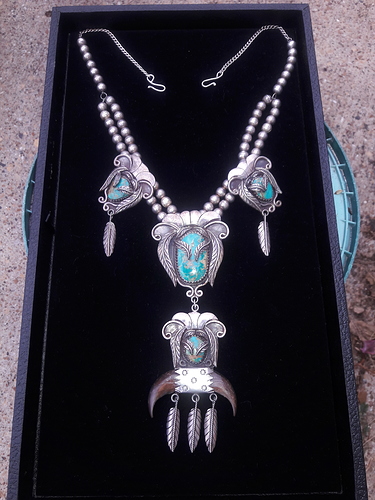 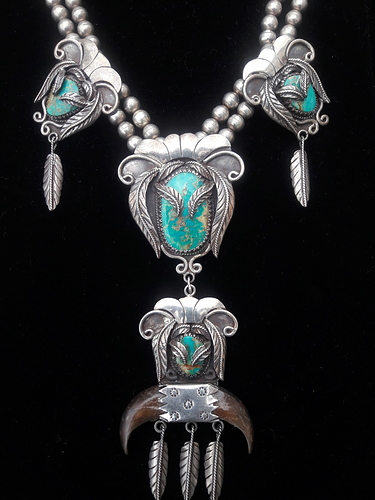 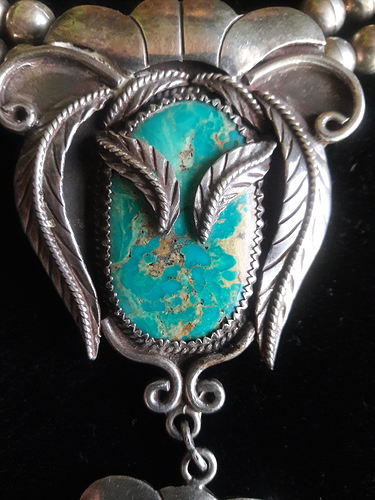 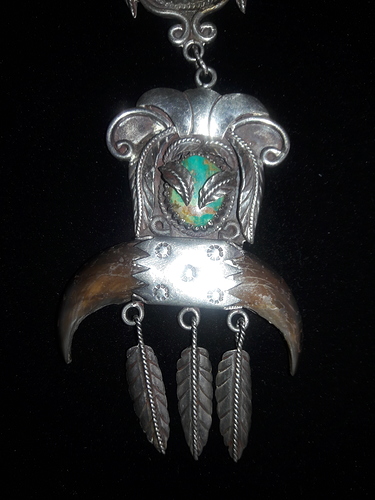 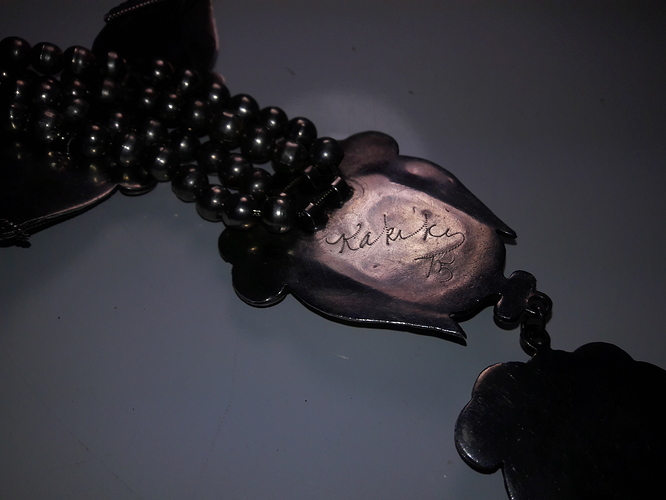 It’s great! Especially like the fan style silver work at the top of each turquoise.

Thanks Q, it had been for sale since early spring. It was on my watch list. I did not know the sellers could see who was watching their items. But the seller messaged me and offered it for several hundred dollars less, so I took it.

Thanks, I like them too. Some of the other Kakiki pieces have a lot of wide open, unused real estate.

I’d love to go! Headed out to fertilize my money tree right now. Poor thing has been looking pretty puny!

You should give everyone a cutting off of your money tree, just to save the genetics you understand.

That’s a beautiful piece, it took me a minute to see the bear claws!

FYI: if you are talking about eBay, I don’t believe they know who is watching. I was informed that sellers have the ability to offer a discount to the ‘class’ of watchers. It is a limited time offer that is not available to the public but also is not sent to an individual so you need to jump on it asap, as you did.

That is what it said, that the offer had been sent to the people that were “watching” the Item, anyone of which could respond at any time. Honestly, not being terribly familiar with selling online, only buying, and being afflicted with the conspiracy theory gene, I assumed it was simply marketing, designed to create an urgency. I waited until the very last minute to accept the offer so it didn’t seem like anyone else was interested. Same scenario yesterday, Item was offered on Monday, I accepted Wednesday (yesterday) and am expecting delivery on Monday of the set by Ellen Quandelacy.
So maybe they can send an offer to the watchers but don’t know exactly who those watchers are, or how many? I will keep that in mind for next time, maybe I just got lucky this time. I think one of the reasons was because he had misspelled the name as Quandelacey and not many people had found it. 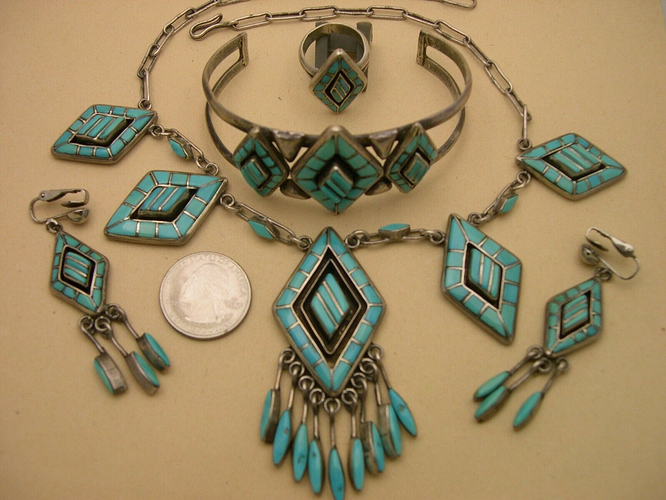 Wow, that is a stunning find!!!

Oh MY GOODNESS!!! What a Beautiful Quandelacy set!! Wow

Thanks, I’m excited. These are the sellers pics. I’ve bought 4 things from them before and their pics are always slightly yellow leaning so I expect some very blue Sleeping Beauty when it arrives. And if it’s not, I’m Ok with that too. 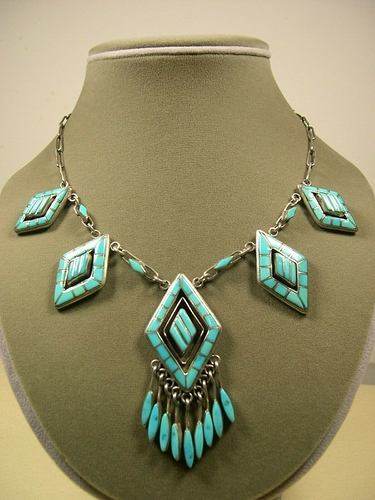 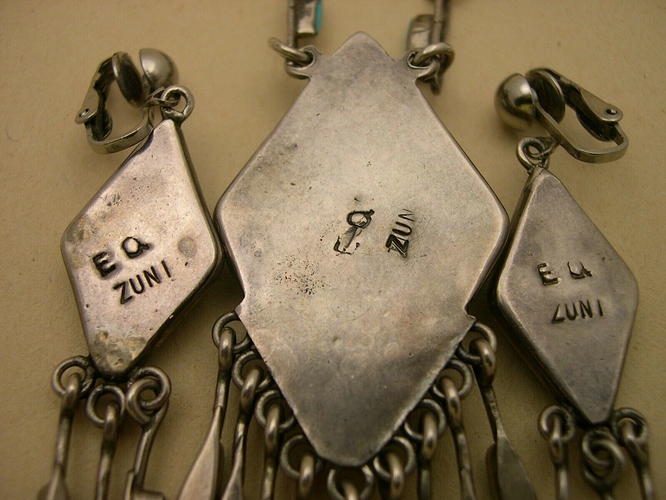 What a gorgeous set! EBay gives you chances to send lower priced offers to “interested buyers”. The seller doesn’t know who unless someone buys.

Thanks, I guess I should start trying to figure that out before I have to sell anything off!

Beautiful, please post your own pics when you get it!

I certainly will, I think it will really pop on a black background if it’s as blue as I’m expecting.

A link to the post for the Ellen Quandelacy set

My latest find arrived today. A set consisting of a necklace, earrings, ring and cuff. As opposed to me making a long post on Ellen, I’ve simply included several book entries I found on her and which book each entry is from. I’ve looked fairly extensively and can not find another example of this exact diamond pattern. It’s one of the reasons I decided to get it. If you see another one let me know, I need a matching pin/broach, lol. Lastly, would anyone have an educated guess on the age? Sh…

I have a bracelet that looks similar. It is marked TIGUA , no other stamps. It does look like the designer scratched M.V. or M, V. On the back of the turquoise setting. I was hoping one of you may be able to tell me where to get more information. Thank you in advance! 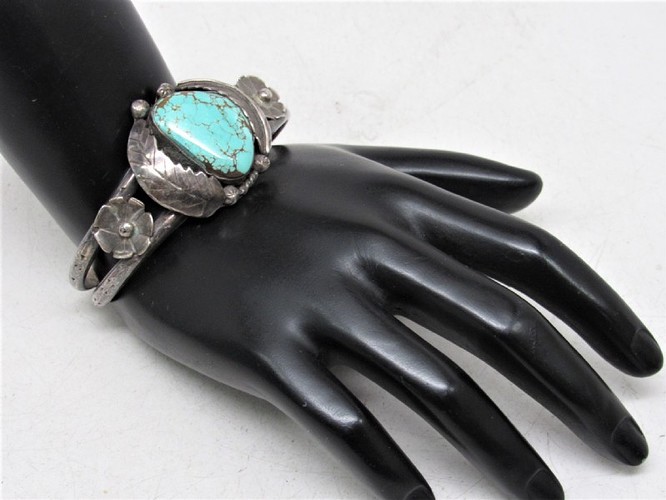 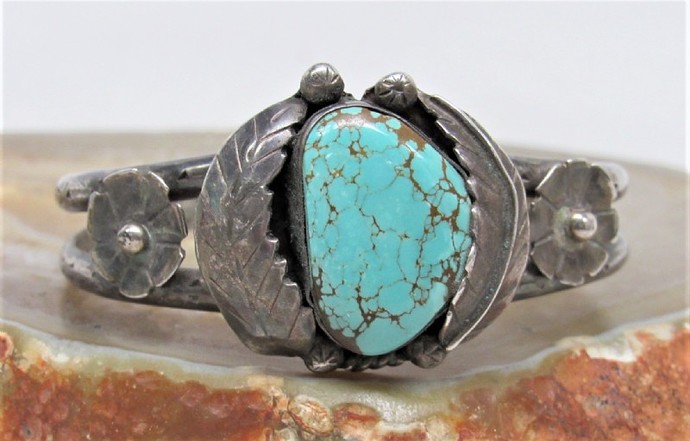 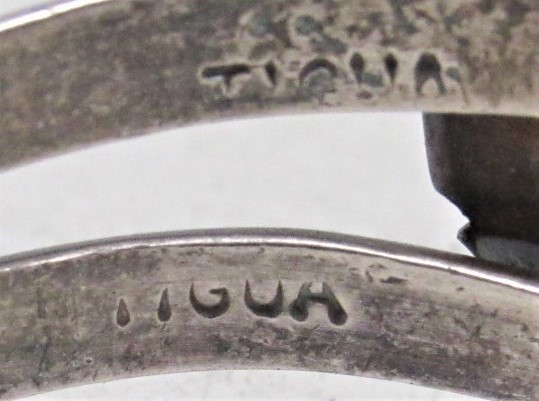