We are checking out the new series Dark Winds VERY loosely based on Hillerman’s books. Missed the first episode so will watch that on demand. Being a BIG Hillerman fangirl, I’m excited. Scenery is gorgeous.

I saw that and was intrigued by it. I’ve never read the books. You’ll have to let us know how it is after you’ve seen a few episodes.

We only watched the first one last night, but I enjoyed it. However, they really changed the characters which was annoying. The characters are intriguing as Hillerman wrote them, so I don’t get that at all. But once I set that aside, it was very good. Beautiful scenery shot in the southwest, and so many native actors. Saw a fair amount of turquoise being worn!

I own all the Hillerman novels, and have read each prob 3 times. He’s not only a great storyteller, but also describes the southwest in such a way I feel I’m there. His books are pretty much the reason we went to Toadlena Trading Post this past summer, and drove past the Crownpoint rug auction place (we knew it was closed - I just wanted to see it). He was given the Special Friends of the Dineh Award, and it shows in his compassionate portrayals of Native Americans.

Saw the first ep tonight…loved it. I’ve read and enjoyed Tony H so it’s a little familiar, but not as deeply invested in the books that it would affect my enjoyment knowing the TV characters are different.
This reminds me that I’ve just learned DuoLingo offers Navajo, and it would come in handy!

Watched the third episode last night and really do like it. Beautiful scenery, good acting, and last night saw a whole lot of turquoise. Highly recommend.

If you haven’t yet…check it out! 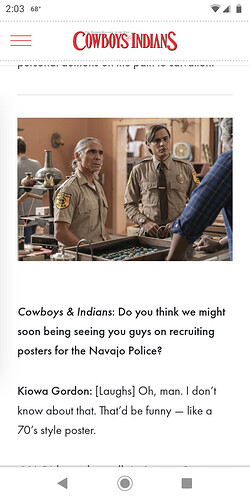